Answers to the ethics dilemmas of web comic artists

From a modern and relatively impersonal perspective, the grounding for intuitive ethics (and much formal ethics) appears to be very shaky indeed, as the Zorblaxian alien explains here (from SMBC by Zack Weiner, full comic here):

When viewed from an alien perspective, this seems like a rather absurd metric to use to judge the value of things.

But our erstwhile web comic authors also don't see any way out of this quandry (an example from XKCD by Randall Munroe, full comic here): 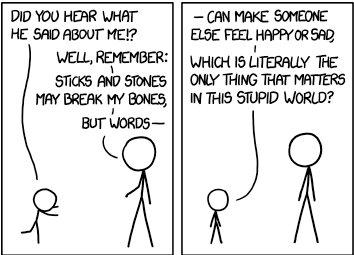 Of course I realize that the source of value is not at all a settled issue within philosophy. But I nonetheless would like to be able to recommend to people grappling with issues like this (how can we ultimately base what's important on something so arbitrary/ad-hoc, and isn't this nonetheless the only thing we can possibly do?) some alternate perspectives that are at least somewhat compelling.

The most obvious tack is to try Kant, but Kant is very hard to read directly, and various philosophers have argued (successfully, in my opinion) that there are a variety of errors and unsupported claims. (Schopenhauer for example.) I'm not aware of any other approach of this type that is dramatically more accessible or with dramatically fewer potential problems.

There's also the theistic approach, but that has its own set of issues, the most difficult of which include that you have to accept that there is a deity, that essentially because I say so is a good reason for a deity even though it's not for a person, and because of concerns that deities could be evil so you can't actually abdicate your role as an independent judge of value.

So is there a clear exposition of some moral philosophy that sidesteps the webcomic angst, or a compelling defense of happiness as the source of value?

Surely ethics if it is mean anything substantial must be grounded in the human situation? Kants categorical imperative is often used as purely rational impersonal characterisation of how to solve ethical dilemmas. But this seems to be wrong-headed seeing that he declared a 'copernican revolution' where objects of the world conform to the human situation. It appears a certain element of his system has been plucked out without due consideration as to the reasons which led him there.

To give an analogy - does anyone claim to understand Newtonian Mechanics by examining solely Newtons First Law? Its full sense is only made apparent by examining together with the rest of his theory.

Given, that we know of no aliens; its an absurd fallacy to declare that aliens will be pure rational beings. Looking around the this world given how the life-sphere (I mean animals as well humans) is dominated by the emotional, passionate & irrational as well as reason. As this is the only grounds from which we can concieve of aliens - its likely that they will have both these drives - reason & emotion.

Far more, the comic strip alludes to a dominating aesthetic for its audience and author - the rational. (And having read the full strip it seems clear the author is poking fun at the 'alien' mindset and arrogance through dramatic irony).

Having said this, a certain theological position identifies God with Logos - reason. This seems as wrong-headed as the purely rational alien. If God exists - then he is far more mysterious than some rule-enacting bureaucract.

Epicurianism is a philosophy attuned to contentment, it can degenerate into hedonism. Interestingly enough Epicurus is a follower of Democritus - a founder of the ancient school of atomism.

Every philosophy can be critiqued, and be dismantled. I don't know of any philosophy that is impervious to all attack. This is why belief & faith is more important than is usually given due credit. They are emotions. Generally these terms are associated with religion - but it seems clear to me that a faith and belief is just as important in valorising and enthroning reason as a value above all other values.

Its also clear, that science, despite its popular conception as a purely democratic venture is actually highly authoritarian and only open to a very few. But this is not due its own nature, but simply because it is a difficult & elite venture - as is theology or athletics.

One should recall that Hume said that 'reason was the slave of the passions'. One can be passionate for the Good, as well as for Vice or for Reason.

The economist Amartya Sen and the moral philosopher Martha Nussbaum have both written on injecting human values into their respective disciplines. Sen arguing that a purely utilitarian idea of economics is impoverishing and Nussbaum critiquing the meaning and understanding of emotions such as 'grief, compassion, and love, and of disgust and shame'. They're both aiming at an understanding and an advocacy of human flourishing in its manifestly many ways.

In response to the first alien, I'd say

It is plausible that over evolutionary timescales human happiness is indicative of human fitness in the evolutionary sense. More people being more happy indicates that we are successfully exploiting our ecological niche. Many of the more "base" pleasures, food, sex, physical comfort, are obviously directly related to individual's abilities to successfully rear children. Even more noble pleasures, like the feeling of community, again seem connected to a group's ability to survive. Even some pleasurable cultural constructs, e.g. war dances, are plausibly related to direct survival; Even though other cultural constructs may simply utilize the reward centers and not directly contribute to evolutionary fitness, having the time and resources to engage in these non-adaptive pleasurable activities, is correlated with having the more basal requirements of life satisfied. Thus, yes, happiness is indicative of our value as a species.

In addition, happiness has an instrumental effect in the continuation of humanity in the evolutionary sense, by providing the drive that leads people to behave in ways that allow for the creation of more people. The story is pretty much the same as the previous paragraph but with the emphasis on "the drive towards pleasure X is what motivates people to X, and X is good (or at least not overly bad) for humanity's long term survival".

Thus, not only is it reasonable to think of happiness as (one of the) indicator(s) of "our value as a species", happiness, or something like it, is probably required for any species engaged in evolution: there must be some cognitive/neurological features that provide the organisms with drives.

To justify this, I can think of a few anecdotes, e.g. human happiness in Europe was probably pretty low during the time of the Black Death, and some studies, e.g. in recessions birth rates go down (study 1), and mental health issues go up (study 2), etc. However, I see trying to to establish that in fact happiness is directly related to environmental fitness would require multiple generations of investigators performing multiple targeted studies to disentangle all of the confounding variables, of which only the first are the pitfalls that seem to come up in evolutionary psychology, or at least in it's popularizations.

Thus, at best, this is an idea to consider.

The Original Position is a simple thought experiment analysis of aspects of the notion of justice. Rawls proposed that the construction of a just society ought to be one in which those responsible for its creation do not know which position in the society they create they will go on to occupy. If we would accept any place in the society constructed, then we could say that the society was just.

The decisions we make have an impact on other people, and a Kantian theory of ethics would have us act in a manner on a personal level that is founded in reasoned theories of the principles of a right and just world. Discussions about the Original Principle help focus our thinking in matters of ethics towards more "structural" considerations for our choices and actions. Unlike Kant, we tend to think that we do not at the end of the day live in a world that is just at its foundations, and there is much that we read and see in our daily lives that reflects this. But encouraging people to think that it needn't be thus, and that justice is in fact possible, seems like it would go a long way to addressing your concerns with the individualist perspective.

Not the answer you're looking for? Browse other questions tagged ethics or ask your own question.

7
What are the current leading theories of intergenerational ethics?
3
Professional ethics - the relative ethics of paying into corruption for the 'greater good'
3
Should the word "ethics" be favored over "morality"?
2
What are the theories related to Business Integrity and Ethics?
1
The ethics of evolutionary custodianship
1
Is there any intellectual advantage in reading the Grand Ethics or the Eudemian ethics?
40
What are the ethics of having children today?