Zeno's stadium paradox: If space is not continuous or discrete, what is it?

Zeno's paradoxes are paradoxical because they show that in a world of continuous time and space, there cannot be any motion, thus all motion that we see are some kind of illusion. His paradoxes then rely on the infinite divisibility of real numbers which would be identical to chopping up continuous space/time and coming to the conclusion that no task can ever be completed in any finite amount of time. The stadium paradox however shows that the idea of discrete space is problematic too, that discreteness of space which would solve the earlier paradoxes of Achilles and the tortoise, or the arrow paradox, cannot solve the stadium paradox. 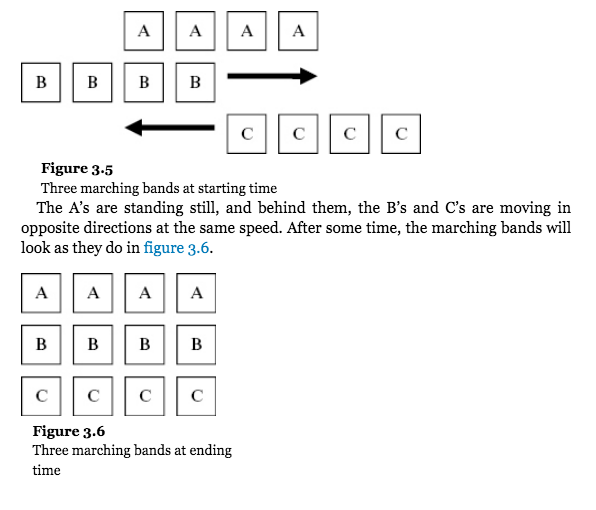 Relativity would solve this problem by contracting space at C from B's perspective and the same with A to a lesser degree. However, you cannot contract discrete space because that contradicts our assumption of discreteness, so space must be continuous in order to allow such a contraction. So to explain the general phenomenon that we observe, we must assume that space and consequently time are both discrete and continuous and the paradox remains.

What should one make out of this? Can this paradox be solved? If not, does it mean that there is no motion or dynamics in the world?

The problem will all paradoxes of this particular sort is actually a problem of language: we don't have a good way (in spoken language or specialized languages like mathematics) to conceptualize tensors. The paradoxes work by slicing movement into a series of discrete, static positions separated by instantaneous movements between those positions, as though objects move by standing perfectly still for some epsilon (a small but non-zero period of time) and then jumping to a new position where they again stand perfectly still. The problem reduces to a question of how objects make that instantaneous jump, which (reasonably enough) seems impossible. But all that really shows us is that we don't how to talk about position and movement in the same breath.

Think of Zeno as an early incarnation of the quantum uncertainty principle, if that helps (though somehow I doubt it will...).

Space is a relation between the viewer and reality. That is actually part of its origin. That is, space is a derived phenomenon, not an innate part of the universe.

May be here you could find one way of solution this paradox:

Discrete Space and Zeno's Paradoxe 'The Moving Rows or Stadium'

It is not a paradox at all

At the time Zeno lived, coordinate systems and frames of reference were not yet being invented and studied. You really do not need relativity to solve this. All you need is to write down speeds in 3 coordinate systems : A, B, C with corresponding reference points. In system A va=0, vb=2, vc=-2 . In system B va=-2, vb=0, vc=-4 . Finally, in system C va =2, vb=4 and vc = 0. You could freely transform speeds from one system to others via relative speed. For example, since in system C vb=4, you need to substract 4 from all speeds in system C to get their values in system B .

As we can see, there is no difference between continual or discrete spaces in this, as long as we can find way to measure speed. Since original "paradox" already defined space (size of rows) and assuming they have equal time units in all 3 systems (which is reasonable considering distances and speeds involved), then they have measurable speeds. However, it is completely correct to take this as one proof that "absolute space" (i.e. absolute frame of reference ) does not exist.

Not the answer you're looking for? Browse other questions tagged time zeno-of-elea space or ask your own question.

11
Does thermal time hypothesis finally resolve Zeno's paradox?
26
Why is Aristotle's objection not considered a resolution to Zeno's paradox?
2
Formulation and clarification of Zeno's arrow paradox
0
Zeno's “Stadium” with the same metaphysical assumptions as his other paradoxes
1
Russell's Response to Zeno's Paradox
1
Do we leave copies of ourselves in the past?
3
What is the difference between Zeno's "Dichotomy" and Richardson's "Coast of England" paradox?
2
Does Zeno's paradox prove the continuity of spacetime?