Why isn't time understood to be relative motion? [closed]

Ask Question
Asked 8 months ago
Active 8 months ago
Viewed 379 times
1
Closed. This question is off-topic. It is not currently accepting answers.

In every way one would observe time, time can be thought of as relative motion. In every way that one would measure time, time is measured by comparing motion. These are falsifiable statements and frustratingly I have yet to find anyone who has been able to correctly falsify them.

I have researched General Relativity on my own through the internet. I am not a physicist or any kind of scientist, but most of what I have gathered I understood through the three classical tests of General Relativity. And to my understanding all three can be understood by replacing spacetime with time thought of as relative motion. What spacetime then becomes is a mathematical construct.

This brings us to a deeper point, the way in which the time variable is gathered for scientific experiments, and or calculations, or really anyway that the time variable is gathered as put in the first paragraph. Time is always gathered by comparing the motion of something to the motion of another thing. Usually one of these things is an object that moves at a set rate and keeps track of how much it's moved, this is what allows for intelligible calculations to be done with the time variable. So time is actually just a result of motion not a requirement as observed by all observations and measurements of time.

Time dilation is to my understanding at the root of all spacetime phenomenon. To my understanding time dilation can be understood with the idea that mass and energy are more or less equivalent. At greater velocities objects at those velocities require more energy to move because they have more energy and therefore it is like they also have more mass. Does this not explain time dilation without spacetime, if time is to be understood as relative motion? An object that is affected by inertia or gravity is affected by time dilation and this would mean their time or motion relative to other objects, not affected by as great inertia or gravity, would be slowed. Could this not mean spacetime curvature is not actually modeling something physical, but modeling the slowing of motion at a given point in space?

Also let me know if this should go a on different stackechange. I posted a similar question on the physics stackechange and they said it should be put on the philosophy stackexchange.

It also explains the direction of time

Yes, this is something I like about this definition as well. It is nice to find someone who agrees with me on this point.

But if time is just relative motion it can not be a structure that is manipulated by mass and energy, but rather mass and energy are variables that affect an object's motion relative to objects not affected by the same mass or energy. This is what I was trying to say when I said, time is a result of motion not a requirement.

And relativity of simultaneity is the main reason for thinking in terms of "spacetime" rather than just processes happening in time. Finally note that for observers moving at constant velocity, time dilation is symmetrical--I measure your clock to be running slow, you measure mine to be running slow.

Hopefully it is okay to quote the following from this Wikipedia page,

Given a certain frame of reference, and the "stationary" observer described earlier, if a second observer accompanied the "moving" clock, each of the observers would perceive the other's clock as ticking at a slower rate than their own local clock, due to them both perceiving the other to be the one that is in motion relative to their own stationary frame of reference.

Common sense would dictate that, if the passage of time has slowed for a moving object, said object would observe the external world's time to be correspondingly sped up. Counterintuitively, special relativity predicts the opposite. When two observers are in motion relative to each other, each will measure the other's clock slowing down, in concordance with them being in motion relative to the observer's frame of reference.

While this seems self-contradictory, a similar oddity occurs in everyday life. If two persons A and B observe each other from a distance, B will appear small to A, but at the same time A will appear small to B. Being familiar with the effects of perspective, there is no contradiction or paradox in this situation.

There are two types of time dilation, one due curvature of spacetime by mass/energy in the general theory of relativity, and one just due to relative velocity in the inertial frames of special relativity

Yes, this goes back to what I was saying earlier. Could it be that curvature in spacetime is not the cause of time dilation, but the equivalence of mass and energy is the cause? Is it not true that gravity or inertia increase energy and at greater energy it is as if the object has greater mass and therefore further motion requires more energy to be performed? Would this not mean that compared to objects not experiencing such as great inertia or gravity would be slowed due to the required increase in energy, meaning it's relative motion or time would be slowed relative to the object experiencing a lesser degree of gravity or inertia? Could this not mean that curvature in spacetime is not showing some underlying architecture of the universe, but plotting any given point in space's effect on an object's motion?

I do not quite understand the question. Pretty much anything can be measured by "comparing motion", mass, charge, pressure, frequency, etc. After all, most of physics is just "particles in motion". Not only is the statement too vague to be falsifiable, it is not even clear what "understanding time as relative motion" means.

What is meant by this question is that for some odd reason we humans seem to think there is a past and a future. Many of us can't seem to understand why time only flows in one direction. We question why does cause always precede effect, and it's simple really if just observe. The only time we can really observe is now, why do many of us think that there is some entity containing a past and a future? Why can't there just be now? The past did happen and the future will eventually happen, but that doesn't mean it exists now. It can be predicted, but the future does not yet exist and the past no longer exists. This can be understood by just observing. How does one know time is passing right now? The motion of what makes up one's perception is being compared to what one is perceiving. Memories are being stored in one's brain to form what one knows of the past. Does it not make more sense for time to be understood as relative motion rather than as google would put it,

the indefinite continued progress of existence and events in the past, present, and future regarded as a whole.

That definition is neither observable or falsifiable yet it is regarded as truth and this greatly bothers me. I am not entirely sure if I am the one misunderstanding something or if it is others.

Moreover, how something is measured usually has little to do with what it is, temperature is measured by a height of mercury in thermometers, for example.

But temperature is how fast particles are bouncing around and this is what makes the mercury rise. For instance refrigerators work by compressing a refrigerant. The way in which something is measured can reveal the true nature of what is being measured.

Also are you familiar with the relativity of simultaneity that I mentioned earlier? This principle says that for two observers moving at constant speed, a pair of events at different locations in space can happen "at the same time" in one observer's frame but at "different times" in another's, which shows that at least in terms of testable physics, the notion of an objective "now" doesn't make sense. Like I said, that's one of the biggest reasons to think in terms of 4D spacetime rather than just processes occurring in time.

I am somewhat familiar with relativity of simultaneity and I have used your link to review what I know. To my understanding spacetime is not necessary for understanding what causes this phenomenon and I will use examples from your link to demonstrate.

For example, a car crash in London and another in New York appearing to happen at the same time to an observer on Earth, will appear to have occurred at slightly different times to an observer on an airplane flying between London and New York. Furthermore, if the two events cannot be causally connected (i.e. the time between event A and event B is less than the distance between them divided by the speed of light), depending on the state of motion, the crash in London may appear to occur first in a given frame, and the New York crash may appear to occur first in another. However, if the events are causally connected, precedence order is preserved in all frames of reference.

The following is picture from Einstein's train thought experiment. 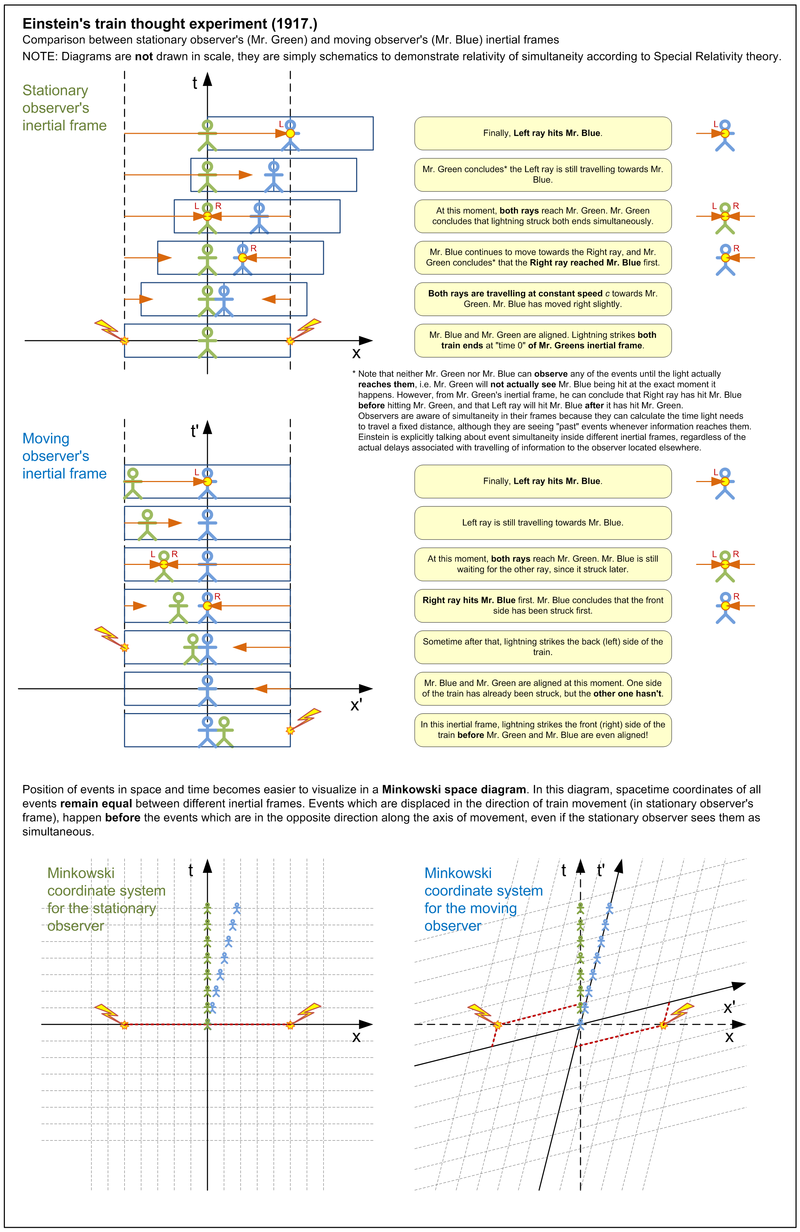 Are these not plausible explanations for relativity of simultaneity? And are they not sufficient explanations without the need of spacetime? I can understand that spacetime can be useful for mathematical modeling, but to my understanding it is not what is actually happening.

"The metaphysical conception engendered by the theory of relativity is one in which the space-time continuum functions as the primordial stuff or substance of the material world. Implicit in the structure of its intrinsic diversification are the existence, physical properites and behavior of material bodies. Space-time is consequently no featureless void but an ordered plenum, in which both the aspect of fullness and that of internal organization have far-reaching philosophical significance."

The complete explanation would require a close reading of this book's chapter III, pp.41-106. This book can be borrowed from the Philosophical Archive (online) for 14 days.

Not the answer you're looking for? Browse other questions tagged time or ask your own question.

16
Is time a physical factor or just a concept?
1
Must the present be instantaneous in a non-deterministic universe?
3
Does the existence of time dilation effects imply presentism?
8
Time and space – a subject of metaphysics?
2
A-theory of time verses B theory of time?
5
Is time more “real” than math and, if so, why?
1
Would it be logically possible that the Universe has a beginning in time but an infinite amount of time has elapsed since this beginning?
1
Do we leave copies of ourselves in the past?