Can someone be both a theist and an atheist?

Perhaps rarer would be an individual who is atheistic with respect to gods of all known religions, cultures, etc., but who nevertheless believes there is a god. I'd count this individual as a theist, and many atheists.

If someone has a dissociative identity disorder and at least one personality is theist and at least another one is atheist, it is possible.

Illustrative of his prima facie contradictory stance is the title of one of his books: The Gospel of Christian Atheism 1966, updated 2003. 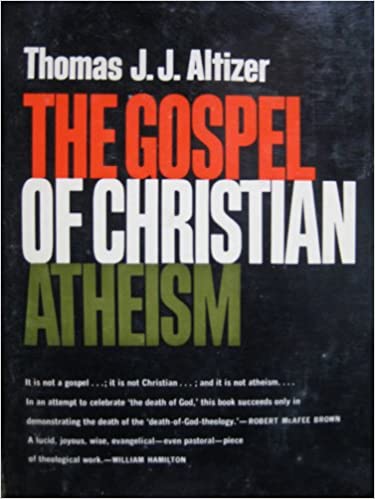 Altizer has a nuanced view of God which is intrinsically bound up with the concepts of good, evil, fallenness, epiphany and redemption. The Nihil and (non-)existence feature heavily too. He holds that when philosophy properly analyses the concept of evil it becomes theology:-

"Now it is truly remarkable that so little attention is given to evil in Western philosophy. One could search in vain in our philosophical dictionaries and encyclopedias for a serious treatment of evil, ...

"Such a refusal of evil as a genuine question is surely a refusal of the very actuality of the world. Indeed, one can observe in the very history of philosophy and theology a progressive diminution of the question of evil. Perhaps at no other point do their histories more fully coincide. Yet when philosophy first deeply engages the question of evil in German Idealism, this is precisely the point at which philosophy fully becomes theology, and thereafter a non-philosophical theology progressively regresses into a fully dogmatic and ecclesiastical form."

Altizer is considered a member of the 1960s "Death of God movement". His obituary in the New York Times is informative of his influence:-

His theology was esoteric and not easily understood, leaving most people, including many clergy, to react viscerally to its basic premise. Confusing matters was that the few theologians in his intellectual circle — including William Hamilton, Paul M. Van Buren and Rabbi Richard Rubenstein — did not agree among themselves on how God had died, why he had died or what his death meant. They were essentially writing God out of the picture, but they did not consider themselves atheists; Dr. Altizer called himself a Christian atheist, further muddying the waters.

“He was one of the country’s most hated, misunderstood, radical and prophetic voices of the past century,” said Jordan E. Miller, who taught religion at Stonehill College in Massachusetts, wrote articles with Dr. Altizer and considered him a mentor.

The “God Is Dead” cultural moment, such as it was, was short-lived. A year after the Time article, Dr. Altizer lamented that he was no longer “the bad boy of theology” but felt more “like the invisible man.”

But he had inflamed evangelicals, and his lasting effect may be that he helped give rise to the religious right.

“I suggest that both evangelical and mainline Protestantism’s development from the late 1960s were a reaction against his theology,” said Christopher D. Rodkey, who is pastor at St. Paul’s United Church of Christ in Dallastown, Pa., and who also considered Dr. Altizer a mentor.

If a person declares himself to be both, a theist and an atheist, then the person should first clarify his/her concepts. Both terms are contradictory. Hence the answer to the OP's question is "no".

People who hold contradictory beliefs are sick. In psychology, this disease is called cognitive dissonance.

In the field of psychology, cognitive dissonance occurs when a person holds two or more contradictory beliefs, ideas, or values; or participates in an action that goes against one of these three, and experiences psychological stress because of that. -- Wikipedia, Cognitive Dissonance

However, there is a real, healthy state of being called Achintya Bheda Abheda, or simultaneous oneness and difference between an individual soul and Supreme Soul. It is also called monotheistic dualism.

Yes. Bertrand Russell admitted that the scientific stance is agnosticism, the existence of god/s has not been proved. But said he identified as atheist for clarity in debate, that he did not believe in deities so far specified. He pointed out that nearly all religious persons believing in a deity/ies is atheist with regard to the deity/iesof other faiths.

Someone identifying as agnostic can perfectly conceive of very powerful beings, like the suggestion from the OrchOR theory that it might be possible neutron stars are sentient - that is a hypothesis that can validly be contemplated, whatever it's status. Such a being would be orders of magnitude more powerful than deities are usually pictured. The most extreme case along these lines is the Brahmajala Sutta (DN 1), where Buddha went to teach Maha Brahma, the being that thought itself to be Creator. Through discourse Buddha establishes Maha Brahma was only the first being in this realm, and that it faces the same fundamental challenges as all beings. The core of this teaching being, that a very powerful might be able to provide various blessings, but cannot help with the core business of life, is irrelevant to that - so agnosticism.

Deities have performed many types of role, like the Tuatha ne Danaan and animal spirits in Australian Aboriginal cultures, may have recorded seasonal changes and their consequences as theistic 'soap operas', potentially over very long spans of time. Greek theism, possibly amplified by competitive play-writing as a religious festival, seems to have developed an unusually sophisticated psychological model in their theology, as interpreted by Jung & others. 'Cultural' jews can even be fully observant in the orthodox tradition, while being atheist, highlighting to my mind that the assumption religions are primarily sets of cosmological assertions as being very doubtful.

Einstein's 'mind of god', interpreting existence or nature as a supreme whole, or god interpreted as reason/logos, or god as love, also blur the boundaries - Einstein for instance clarified he was an atheist, despite using this phrasing.

Not the answer you're looking for? Browse other questions tagged epistemology theology belief or ask your own question.

11
Does the notion of an all-powerful God conflict with the idea of free will?
7
Can a theist accept any brute facts about the natural world?
0
Opinions in face of an unsolvable problem (case-study on the existence of God)
7
What do atheists believe in? (in layman terms)
2
Is a theist obliged to believe that at least half of the world is the work of God?
6
How does this New Atheist argument add up?
1
Can someone explain omnipotence to me?