Is the uniqueness of the human species evidence against evolution? [closed]

Ask Question
Asked 4 months ago
Active 4 months ago
Viewed 230 times
-4
Closed. This question is opinion-based. It is not currently accepting answers.

Evolution theory states, simply put, that all species on Earth have evolved over time, starting from one or more initial ancestors, to what they are today, through processes of reproduction guided by natural selection.

That is, one can imagine that the species currently existing as the final branch on a tree with a large number of branches that spawn other branches and so on. Call this the tree of species. 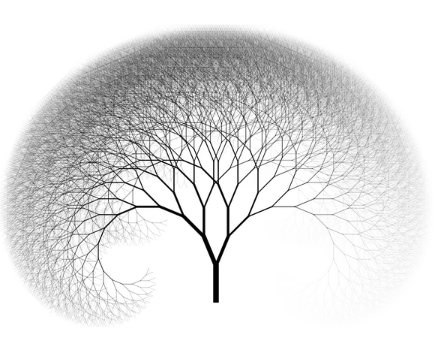 Clearly, the human species in particular is unique amongst all such branches of species, considering the variety of intra-species traits they exhibit, their intellectual capacities, and the complexities of the lives they live. It is impossible to consider the tree of species on Earth, as depicted above, and not notice the loud and clear uniqueness of the human species. At first sight, one may confuse them with the chimps or the gorillas, in so far as they all share 1 head, 2 arms, 2 legs, and 1 torso. But any further inquiry would immediately reveal the human species as a stand-out performer.

That is to say, the tree of species depicted above has, to an objective eye, the following representation: 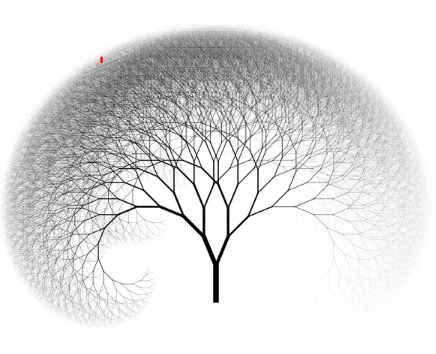 The red branch in this picture is the human species, the stand-out performer of all other species, the one which one notices immediately upon inspection, and the one which clearly differs in near infinitely many ways from the other branches/species.

Then one asks oneself: if one were to take as stroll in a park, and fell upon a tree such as this, would one think to oneself "this tree is the byproduct of completely natural processes, and the uniquely red branch is just an odd coincidence...", or would one not rather think to oneself "this tree is peculiar indeed, one may even begin to wonder whether that red branch has spawned from a source uniquely different from the source that originated the other branches".

My conclusion is, does the uniqueness of the human species provide probabilistic counter-evidence to the theory of evolution? If humans have spawned from the same original common ancestors in the same environment guided by the same natural processes (natural selection) as all other species on the planet, then why is the outcome of the human species so vastly different from all others?. Although quite literally there is nothing that seemingly makes such an occurence impossible per se, but probablistically, it does raise the valid question of is this not very unlikely to happen?

No, the theory of evolution does not require or even predict uniformity of all species, not even resemblance. It does not reject the possibility of exceptional or unique species to form. Nor does it describe or predict any probability for any trait.

Thus any exceptionally or unlikely looking species does not contradict the theory of evolution.

All known or assumed steps in the history of human evolution fit well in the theory of evolution of random mutations and natural selection. No magic sauce is required to explain the evolution of humanity. https://en.m.wikipedia.org/wiki/Human_evolution

Human evolution from its first separation from the last common ancestor of humans and chimpanzees is characterized by a number of morphological, developmental, physiological, and behavioral changes. The most significant of these adaptations are bipedalism, increased brain size, lengthened ontogeny (gestation and infancy), and decreased sexual dimorphism. Other significant morphological changes included the evolution of a power and precision grip.

Also the theory of evolution only explains the genetic differences among primates (e.g. the genetic differences between homo sapiens sapiens and chimpanzees). It does not explain other differences in behavior that are possible without genetic change, through learning and teaching. It does not include the inventions of Flint, the knife, the spear, the plow, the wheel, the rope, tanning, pottery, bronze, iron, currency, the loom, the printing press, the magnetic compass, glass, steel, the steam machine, ... Take all those away and the difference between humans and chimpanzees will seem much smaller maybe.

As to why no other species on earth so far is known to have evolved to produce human-like intelligence, this has also been debated a lot. The most common arguments being that the brain growth required also has a lot of biological cost and disadvantages to a species, so likely constantly some smarter offspring is born in all species with brains, but they are worse at survival than their less smart siblings. For the homo chain of species the body shape and external circumstances in only one region of the planet were favorable enough to outweigh the costs. Which fits the theory of evolution, and does not contradict it.

In literature such views as in the question belong to the category of anthropocentrism or human exceptionalism (https://en.m.wikipedia.org/wiki/Anthropocentrism).

the belief that human beings are the most important entity in the universe.

Because such views are not mainstream science and are often part of extremist religious (in particular Intelligent Design ) or racist writings, it is prudent to not raise such questions without proper preparation. "Something that seems unlikely to happen should not be assumed a coincidence" certainly is not sufficient preparation to raise such a question.

All species are unique. Some are more unique than others, including humans.

The chimpanzee is a pretty unique species...but it's eerily similar to humans. So if we want to posit a different origin for humans based on our uniqueness, maybe we should accept the possibility that humans and chimpanzees were the product of a divine creation, or whatever.

Perhaps the giraffe, narwhal, giant panda and 10,000 other unique species were also created in a similar fashion. Only "ordinary" species evolved. But if you could travel back in time to the origin of the first species, that pioneering species would be incredibly unique.

“I know you won't believe me, but the highest form of Human Excellence is to question oneself and others.
“For you see what our discussions are all about – and is there anything about which a man of even small intelligence would be more serious than this -- what is the way we ought to live?
-- Socrates

Yes, we ARE quantifiably¹ unique. And no, that's NO evidence against evolution!

... in fact, our uniqueness was evolved because it gave us quite an evolutionary advantage. Quite.

¹ ... and by that I mean the "I am the President, and you're not!" kind of quantifiability

If humans have spawned from the same original common ancestors in the same environment guided by the same natural processes (natural selection) as all other species on the planet, then why is the outcome of the human species so vastly different from all others?

An excellent question! -- and your intuition is right on the money. There is, in fact, something very special about us, a trait that no other species on Earth possess.

Sadly, for the longest time, that capacity also has been a dying art of sorts. Most of us -- and for no fault of their own -- lose it early in our childhood. Among those who managed to cling on their humanity, only a few luckiest ones were presented with a chance to fully develop it. That's why most people simply cannot tell anymore what makes them so different from animals. So, again, thank you for asking!.. (and I'm sorry if it is not the answer you were hoping for)

What Makes us Human

The best way to shed a light on it is none other than the infamous IS-OUGHT gap. How do we go from what IS to what we think it OUGHT to be? David Hume, as many others see it as a gap, leading them to question our ethics, our science, our ability to choose consciously, and the very existence of the consciousness itself.

And, indeed, what they perceive as a gap, as void -- that thing IS our humanity, all that there is to it. It is in our ability to wonder why. To wonder why it is, and, by that measure, how it could have been. Of course, that capacity would be of little use if we didn't develop, alongside, the ability to understand and explain why.

"Wisdom begins in wonder," as Socrates would put it

You can call it curiosity, but it is not that of a cat. A cat is curious about WHAT-IS, and we have plenty of that too. What makes us human is that second kind, the WHY-IS. This can be confusing, especially to someone who, like most people, had lost the WHY-IS kind after being conditioned against it in their childhood.

What they are longing for is understanding. Unable to express it as WHY-IS, they keep falling back to WHAT-IS, and it makes them looking for new experiences instead.

“Intelligent individuals learn from every thing and every one; average people, from their experiences. The stupid already have all the answers.
-- Socrates

Below is an excerpt from "The Moral Intelligence of Children" by Robert Coles. 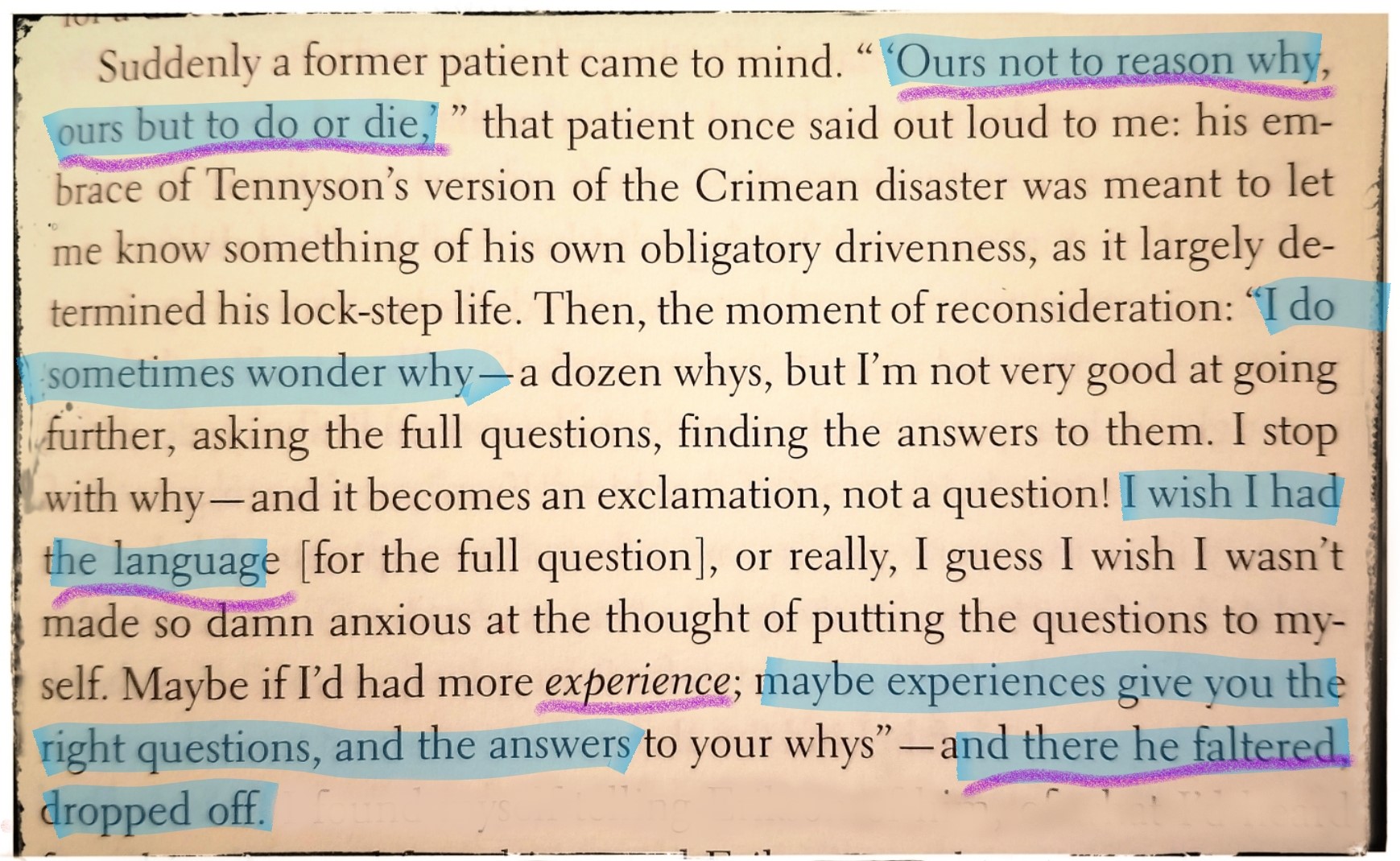 The above struggle was already widespread 2500 years ago, according to Heraclitus:

"The learning of many things does not teach understanding; otherwise, it would have taught Hesiod and Pythagoras, and again Xenophanes and Hecataeus".

I understand why many ppl would find this reading rather disturbing. But it is not my truth. It is the truth. And the truth will set you free.

Still, you might be wondering what would be the significance of it all? And, perhaps, the capacity to ask and explain why might sound trivial... So let me explain why (and I'm smiling as I type this) it is anything but.

Why it matters -- the evolutionary perspective

The reason we have spent 5 million years developing it, is that it allows for knowledge sharing. The latter is not the only reason for developing the capacity for reason, for knowledge and understanding (and our animal ancestors already had plenty of that). Paired with a rich enough language, however, it let us share our experiences (not in the raw form, but using our rational mind to encode it the form of knowledge, small enough to be shared with others).

And the significance of that was huge. Every other species on Earth are limited to relying on their own experience, to what they saw with their own eyes, heard with their own ears, felt with their own skin. Being able to share theirs, our species suddenly were able to benefit from the lessons of tens, then hundreds, eventually millions of lifetimes. Enough to take us from living on treetops, and all the way to walking into tree trunks, phones first.

For heaven's sake, let's not lose it now.

Not the answer you're looking for? Browse other questions tagged evolution or ask your own question.

9
As a result of human progression in science (specifically medicine), have we created ourselves a plateau in the evolutionary process?
8
How does Darwin's Theory of Evolution complicate a reading of Kant's Groundwork for the Metaphysic of Morals?
8
Why are homologies evidence for evolution instead of common design?
11
Is the theory of evolution a good basis for an argument against freewill?
1
How does the theory of evolution deal and logically explain all these?
12
Is it possible that evolution brought human kind morality?
1
Do humans have the comprehension of an ant regarding certain things?
0
The ethics of evolutionary custodianship