What does this quote from Einstein mean? [closed] 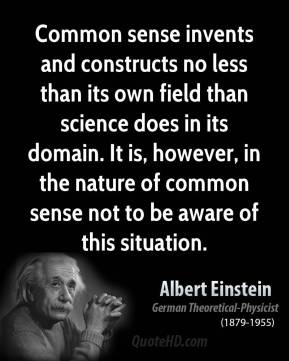 Common sense invents and constructs no less than its own field than science does in its domain. It is, however, in the nature of common sense not to be aware of this situation.

I believe Einstein said this in response to criticism on his theories of special and general relativity. This criticism was a result of the fact that common sense did not seem to agree with Einstein's new theories.

The simple assertion that the speed of a flash of light is always c in any inertial frame leads to consequences that defy common sense. When this was pointed out somewhat forcefully to Einstein, his response was that common sense is the layer of prejudices put down before the age of eighteen. (source)

Gravitation as a curved field and as a part of space-time is a bit difficult to envision in that it seems to contradict common sense. But then, Einstein maintained that common sense is essentially little more than the collection of prejudices acquired by about age eighteen. (source)

I found it very hard to find any context for the quote you mentioned, but I believe that he means that common sense should only be applied to common, everyday situations (on which it is based), rather than also applying it to deep and unintuitive physics or other fields to which common sense shouldn't be applied for the same reason. Common sense is about common, simple, everyday situations ("its own field" in Einstein's quote); it shouldn't be applied to uncommon, complex decisions or complex theories. People aren't sufficiently aware of these limitations of common sense.

Duncan Watts, author of "Everything is obvious", gives the following example from policy-making:

We can agree that something is common sense as long as we share the same set of assumptions. I think people really don’t understand how much of a problem this is, because they assume that what they think is common sense is right.

Someone was just telling me the other day that she was mystified at how we couldn’t just use common sense to make policy. It seemed completely ridiculous to her—why isn’t there someone in politics who could say that it’s common sense that everyone should have equal access to healthcare? But that’s a belief that is deeply disputed! And people who disagree with her also feel that they are using common sense.

So common sense is actually very good for resolving everyday situations, where everyone shares the same set of assumptions. The problem is that it feels so effective to us in these circumstances that we’re tempted to use it to make decisions and plans and predictions about situations that are not everyday situations. (source)

The sentence as it stands is ungrammatical since the construction "less . . . than" actually has two "than" completers that don't make sense together. I think he meant to say, "Common sense invents and constructs no less in its own field than science does in its domain." As to its meaning, I think the answers above state it well: Einstein was defending his own counterintuitive theories against the evidence of common sense by pointing out that common sense itself sometimes does not accurately reflect reality but rather constructs it.

7
What is an “unarticulated background”?
3
What is the reflection of a mind discarded?
5
Was indeterminacy of linguistic meaning, as understood by Quine, anticipated by the Aristotelian-Thomistic tradition?
3
Can purpose be attributed to events without grounding in agency
2
Philosophical approach for discussing the meaning of many words?
2
What does it mean to say what happens in your experience is inside your mind in a way in which what happens in your brain is not?
0
What is the meaning of this Chuang-Tzu quote?