What is the name of this fallacy: 101 is either binary or decimal? 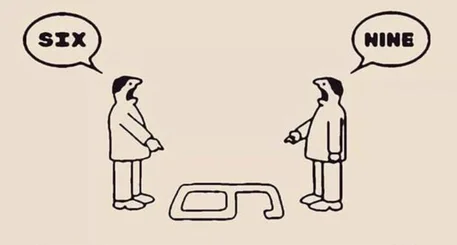 A similar example would be of binary and decimal number where we are not sure about the number system or the person who proposed a number is not remotely available to disclose about number system.

When context is not clear, it could be one hundred and one in decimal, or it could be a decimal representation of five in binary.

Is it even a fallacy, if so then which one?

I prefer to call it the either-or fallacy, but it is also known as false dilemma among others. The idea is that a choice is given that constrains to two or perhaps a few options when a much broader reading of responses is both possible and warranted. In your example, 101 is a number in base-2 and base-10 and every base in between and beyond.

In regards to your picture, it highlights the likely cognitive source of the fallacy, and that is ambiguity. For instance, it is ambiguous when one writes 101 and does not explicitly explain which base it is.

What's the difference between ambiguity and a false dichotomy? Well, ambiguity is a lack of context to indicate the intention of the author, whereas a false dichotomy is an argument that exploits the lack of context. To be technically precise, an argument must have two or more premises and result in a conclusion, and many logicians accept that unstated premises can be reasonably understood by context. For instance, one could posit that an either-or fallacy is essentially understood as:

So, technically the question alone independent of context might not be accepted as an argument and therefore fallacy, but ANY act of drawing a conclusion regarding 101 as binary or decimal and presuming those are the only two choices is clearly a fallacy.

I add my answer there following comments where I think this is not a fallacy, but only an ambiguous statement or a lack of context.

The false dilemna would apply if in your context you would be forced to choose.

We could also dig towards the confirmation bias where one or many people only read what they goes towards their own opinion.

I'd argue that the statement/question itself is perfectly fine, and in no way fallacious.
But it may be used as trick question to make a joke at the cost of the answerer.

The English question "A or B?" is somewhat ambiguous since it does not specifiy whether the or is inclusive or exclusive: or is by default inclusive, but questions of this pattern are usually meant with an exclusive or.

Since the statement evaluates to TRUE for inclusive or, but FALSE for exclusive or, this opens the possibility for the questioner to react to the answer by claiming it to be wrong whenever the answerer answers TRUE or FALSE (and of course, unanswerable is also wrong): for answer FALSE the exclusive reading they can claim that OR is inclusive since they did not say XOR, for the answer TRUE they can claim that TRUE XOR TRUE is FALSE and that "A or B?" is parsed as exclusive or in everyday English.

The unambiguously correct answer is thus: "both".

(This is like asking a child "Do you want cake or ice cream?")

So, the question is confusing two different things.

The question "Is 101 decimal or binary?" is a false dichotomy or false dilemma as 101 could be a representation in any number base > 1 since 1 and 0 are valid symbols.

However, the cartoon of two people with conflicting perspectives is not a false dichotomy. If anything, it's potentially an appeal to authority, since each person is staking their claim based on their position and asserting the correctness of it based solely on their point of view.

All said and done, what we've really got in the cartoon is failure to communicate.

This is an example of:

Technically, false premises are not fallacies (not even informal ones), but rather errors in observation or in the interpretation/translation of observations into logical premises (i.e., statements of fact). In this case the facts being claimed are clearly not justified by the actual observations.

It is possible to claim a variety of different fallacies being present in this translation/interpretation process (over-generalization, false dilemma, etc.) but these are specious as there's no logical reasoning apparent here, you have to infer it (speciously).

Consider this modified example, what if in the OP's picture, the 9/6 were replaced with a 3 and the observers still said "six" and "nine"? It's just a more obvious example of the same error, an observational failure/false premise.

If some insist on inferring reasoning from the observational process depicted, then what has happened is that each has assumed (without apparent justification) from what direction the symbol should be read, which is also a false premise. Less obvious is that both are assuming that it is a number/digit and not say a lower-case g, or a glyph/symbol from a writing system unfamiliar to them (in this way, most people reading this cartoon are also making a false premise). This too is a false premise.

Likewise any attempt to definitively say whether "101" is binary or decimal (or not a number at all, but just some ones and zeros next to each other) without any other context or applicable convention is another false premise.

False dilemma is indeed a good term for this example. However because only two options are presented the term false dichotomy could also be used in this case.

I am going to attempt to answer the intention of the question, which was around a seemly subjective assessment of fact with TWO viable conclusions.

I don't believe the OP is posing a false dilemma scenario.

This is a case of Affirming the Consequent

The fact that there are two people in the cartoon using flawed logic to arrive at two outcomes does not make this a false dilemma.

I can see at least two interpretations for this question:

So in both cases the fallacy consists in "forgetting" about some of the logical possibilities. As pointed out before, case 1 might be termed a false dilemma and case 2 a false premise.

But I think they are really two examples of the same pervasive human thinking error:

the availability bias, which is the tendency to give excessive weight to the most obvious (familiar, recent, etc.) elements while disregarding other relevant ones: https://en.wikipedia.org/wiki/Availability_heuristic.

The name for this is Paradox.

And the only way to solve this paradox is when all the players recognize that they are in a paradox and need to understand that both are talking about the same thing in different perspectives.

If one player cannot agree, he is trapped in the Dogma (in-the-box mindset)

Let us make the statement and then ask the question.

The answer is of course Yes, because the statement is True or False. We just don't know which because the question is insufficiently defined.

0
What do you call a situation or case where a person say we are in a A XOR B situation when it's not?

8
Is “if A then B; B therefore A” a subset of the “post hoc” fallacy?
3
Can the “accident” fallacy be applied to religious laws?
2
Is there a named fallacy for the argument that a proposition is “believable by comparison”?
1
Someone said argument A, the other heard argument A', is that a fallacy?
3
Is calling an argument a fallacy, or is the notion of informal fallacy, just a method of manipulation?
4
Presenting an example, then claiming the other person needs more information before using the same example - is either of us making a fallacy?
2
What is the Texas sharpshooter fallacy?
1
Name for a logical fallacy: confusing measures in argumentation
0
“You're not X, but… that says a lot”. Is this a fallacy?