Is free will compatible with determinism? (Ramsey theorem)

Do we have free will? Or everything is already determined? Are they mutually exclusive? I think they can coexist and have something similar to a proof here and would like to know your thought There is a theorem in math which is called Ramsey Theory. A simple version of it goes like this:

Consider a complete graph on six vertices (where every vertex has an edge connecting it with every other vertex, for a total of 15 edges): you are allowed to color each edge either blue or red. whatever you want! So far so good. Now the theorem says that no matter how you decide to color the edges, there will be always a triangle whose edges are either blue or red. Meaning that, any two-coloring of this graph has a triangle that is either blue or red. I attached an example. there are 2 rise to the power of 15 possible coloring. All of them has three vertices that are connected by edges of the same color 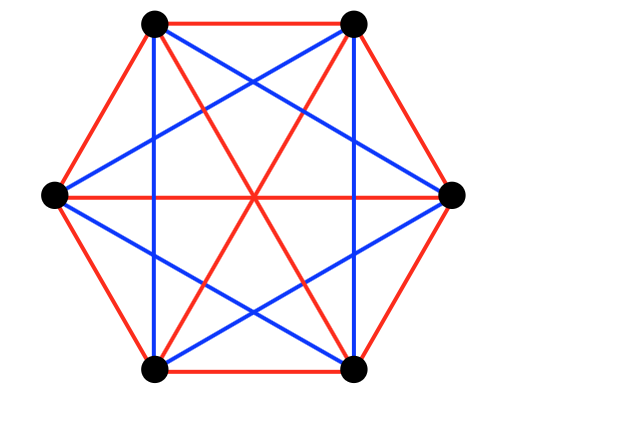 So what's the takeaway if you expand this finding? you are free to choose whatever color you want, but no matter what you chose, you will get a triangle whose edges are of the same color . Our lives could be like this too. We could have free will. Yet we are also bound to causality which makes the world determined. There is no reason to believe that free will and determinism are mutually exclusive

Take a step back and parse what's really happening here. Ramsey's Theorem is a combinatorial theorem which essentially says that there exists a class of mathematical objects under the right conditions such that the freedom regarding the variables of edge-labeling is independent of the existence of a particular type of a monochromatic subgraph. That means, if given all permutations possible of the sufficiently large complete graph, no matter which permutation one pulls out of the metaphorical bag of choices, one is bound to get a graph with a monochromatic clique (in the general case).

If one uses a typical definition of free will, one is presented with:

Free will is the ability to choose between different possible courses of action unimpeded.

What you are asking has a few things that require unpacking first.

The theorem in question is a product of deduction. A deduction by definition says that if the hypothesis is true, than the conclusion is true, and in this case, the theorem says more specifically that any hypothesis chosen (a distinct permutation), the conclusion is the same (a monochromatic clique). But the question springs to mind, if every choice leads to the same consequence, is it really a choice? Henry Ford is quoted as saying that "A customer can have a car painted any color he wants as long as it’s black”. This is known eponymously as Hobson's choice. But what does it mean to make a choice? One interesting finding in cognitive science is that the brain reflects a choice before an individual's phenomenological awareness thereof.

What can be taken from this intuitionally is that there is and is not an element of free will involved depending on context of theory. A person can choose not to choose, and that is a choice; and in your example, if a person chooses a permutation, she will wind up with a unique graph by definition; but that that graph also contains some commonality with all graphs means that the person is not free to choose a graph from the set without a monochromatic clique. So, whether or not one views this as an act of free will is contingent upon how the situation is framed AND one's metaphysical presumptions about the definitions and relationships of and between free will and determinism.

Part of the consideration you need give to the question is that the essence of determinism is up for grabs too! The immaterialist George Berkeley and eliminative materialist Daniel Dennett all have very different views on what constitutes determinism to begin with.

One simple example of how complicated things might be that if you accept Cartesian dualism, there is no causality between the material and mental. Can one say that the mental choice (if it really is a choice) to roll a dice (a physical object) leads to an outcome which requires apprehension of the abstract? Is the dice roll predetermined, and how would you know? A theologian would argue divine revelation makes it part of God's predetermination. Would someone who rejects supernaturalism accept that?

This issue has been without consensus since time barely memorial; it will likely stay active and vigorously debated.

Once you be precise about what each of those terms mean, you would not be asking this question. Standard notions of determinism state that everything is determined, not just that some things are determined... For a better example than Ramsey's theorem, notice that whether you have free will or not, it always is the case in our world that something exists.

"We could have free will. Yet we are also bound to causality which makes the world determined. There is no reason to believe that free will and determinism are mutually exclusive"

Good observation- At first it sounds like an outright contradiction in terms to place, free and determinism together. But Spinoza maintained that freedom and necessity are linked. He maintained that free-will is an illusion that occurs because people do not recognize the causation which drives their actions. At the same time he maintained that recognizing that our choices do clearly exist, but they do so in a limited sense due to the experiences which fundamentally shape our lives. Understanding this arrangement enables us to make better choices. Google Spinoza and free-necessity. – Charles M Saunders 10 hours ago

free will can still be shown to exist. (Relaxing these constraints should preserve the conclusion, though this is left as an exercise for the reader.) The argument goes like this:

If the process in your brain was different, then the decisions made would be different – but also, there would be a different you. Determinism, then, does not restrict your actions; only the bounds on the kinds of people that can exist. (You didn't choose to exist, did you? That's true regardless of whether determinism holds; if that's your standard for free will, you're going to have some problems with it (see the bit about Author* control).)

If you want your decisions to come from somewhere outside of reality, but you've accepted physicalism, then you're out of luck. But if you're satisfied with your decisions taking place in your own head, such that you are a necessary part of the decision-making process, and a different decision being made if you wanted a different decision to be made, then determinism implies free will.

Your question falls apart with "you are free to choose whatever color you want,". This is basically an assumption of free will. You go on to point out all coloring schemes are constrained by your example to always have a blue or red triangle.

Such examples are endless. If you have five balls to put in six boxes you will always have a box without a ball in it. Even better if you have one ball and two boxes you'll always have one without a ball in it. The inevitable conclusion has nothing to do with free will. Your argument shows that even if we have free will we can't avoid logical constraints.

Perhaps you have an emotional interest in believing in free will.

If the many worlds theory of quantum mechanics is true, then each possible timeline for the universe exists as a parallel world. Free will selects which parallel world you live in; but it is predetermined that world will exist.

Not the answer you're looking for? Browse other questions tagged philosophy-of-mathematics free-will determinism or ask your own question.

24
Aren't we all philosophical zombies?
23
How can free will in compatibilism be proven?
5
Do philosophers have some arguments regarding possible explanations for origin of free will?

3
Sartrian Freedom Compatible with Determinism?
10
Is Conway-Kochen's "free will" theorem about quantum measurements an argument for panpsychism?
2
Free will and hard determinism
3
Truth Claims - Free Will - Determinism
2
Is epiphenomenalism compatible with free will?
2
How can Determinism be true in light of the Free Will Theorem
1
Could free will exist as spontaneous particle creations?
0
Does the denial of free will necessarily imply determinism?
1
Kant on triangles vs unicorns