How can scientific objectivity be possible in a phenomenological world?

Consider this question as a thought experiment. If human perception of the sensible world is phenomenological in nature, then all experience and apperception are fundamentally veneers or glimpses or facades or phantasms all of some underlying, indefinable source elemental structure. In this world how would it be possible to obtain to scientific objective certainty without encountering an insurmountable contradiction in terms?

Option 1: the objective reality exists. In this case, whatever veneer or facade or phantasm our experience and apperception might be, they should provide us with at least some way of deducing the nature of this reality. Like, you know, the ability to figure out which animals you may objectively hunt and eat, and which ones make the opposite outcome more likely. And how to improve your odds in this situation.

Here, scientific method is just formalization of best practices of deducing the nature of objective reality, extended to cases not directly necessary for survival.

Option 2: the world is an illusion. Then all bets are off. Examining the world by scientific method may eventually lead to contradiction if the creator of the illusion is sloppy enough. But then, she may easily rewrite your memory so you won't notice.

It's true and an inescapable fact that all our perceptions of things are just representations of those things, not those very things themselves. This is because we cannot perceive things directly but through our nervous system, from various sensory receptors to primary sensory areas to the final perception areas. What we perceive are thus what the nervous system synthesizes in those final perception areas to represent things. These synthesized representations are different in different beings that perceive the same thing.

Things in the external world do not have color, hardness, odor, etc. as they appear in our minds by themselves; they just have properties that can create qualia (color, hardness, odor, etc.) in a being’s nervous system and mind via the being’s sensory perception systems. The qualia of a thing in the outside world may be different in different beings, but none of the qualia are that thing or can be claimed to be the only correct representations of that thing. 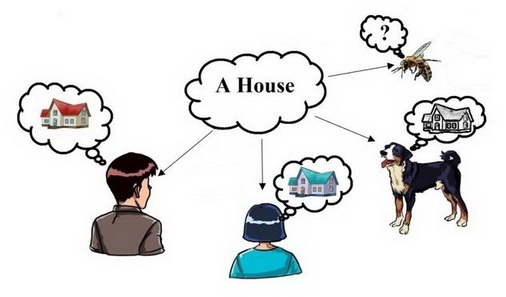 (from 3.6. Sensory perception qualia as representations of the outside world in The Basic Theory of the Mind)

physics characterizes its basic entities only extrinsically, in terms of their causes and effects, and leaves their intrinsic nature unspecified. For everything that physics tells us about a particle, for example, it might as well just be a bundle of causal dispositions; we know nothing of the entity that carries those dispositions. The same goes for fundamental properties, such as mass and charge: ultimately, these are complex dispositional properties (to have mass is to resist acceleration in a certain way, and so on). But whenever one has a causal disposition, one can ask about the categorical basis of that disposition: that is, what is the entity that is doing the causing?

Once again to Hallett, here his explanation as to why the phenomenal world while useful because it forms the basis of everyday experience of the sensible world, does not serve to adequately capture anything other than itself, which ultimately renders it useless in the search for scientific certainty. Bear in mind the point here is not to question the work of science nor its more than estimable results, but rather to call into question the theoretical claim that phenomenology can play a role in any search for scientific objectivity or for that matter in the formulating of any accurate scientific paradigm.

Unlike what some have maintained, this is not a trivial issue.

"Thus when recent philosophers have permitted themselves to accept time at its face value, as a mere empirical fact, ultimate and inescapable, they have thereby (consciously or not) doomed their theories to metaphysical inadequacy. As phenomenology, in many cases, these philosophies may be excellent, but they are incapable of sustaining a claim to the title of metaphysics. It was thus no accident or arbitrary emphasis that led Kant to concentrate his attention upon the temporal aspect of phenomena when dealing with the schematism of the pure concepts of the understanding. Arbitrary it may have been from the standpoint of the Kantian theory itself with space and time as co-ordinate forms of sensuous intuition, but from the broader standpoint of philosophical construction it was in accordance with genuine insight, and it is noteworthy that, as his thought developed, Kant laid increasing emphasis upon the central importance of time in the critical account of phenomena. Phenomena are essentially temporal; as the situation is not essentially changed by Mr. Whitehead’s substitution of ‘passage’ or ‘process’ for time. Though ‘passage’ is prior to time it is still conceived as a ‘moving on’ or succession; and if the unwary are apt to read this as temporal (or spatio-temporal) it is because no alternative significance (e.g. eternal creativity) is provided by the author (for the term ‘creative passage’ does no more than emphasize the reality of the passing). Passage is, therefore, a mere datum the opacity of which to critical thought darkens the whole issue. Professor Kemp Smith expresses it: ‘Consciousness of time is the factual experience, as conditions of whose possibility the a priori factors are transcendentally proved. In so far as they can be shown to be its indispensable conditions, its mere existence proves their reality. And such in effect is the ultimate character of Kant’s proof of the objective validity of the categories. Kant himself, indeed, seems to have been ready to go even further and to assert that phenomena are formally, i.e. essentially, constituted by time; that at least seems to be the obscure significance of his very remarkable statement that ‘as time is only the form of intuition, consequently of objects as phenomena, that which in objects corresponds to sensation is the transcendental matter of all objects as things-in-themselves’. Certainly for Kant the phenomenal world is (if not a world of time) essentially a temporal world the parts of which are ordered in accordance with the schemata or categories; and it is significant that when he comes to discuss the metaphysical presuppositions of morality, and in particular the senses in which man as a moral agent must be both autonomous and also subject to the heteronomy of nature, he finds that freedom belongs only to beings who are not mere parts of nature (and hence subject to the transient causality of the other parts, and thus to determination by impulse and inclination), but are also members of the noumenal kingdom of ends. He thus rightly emphasizes the double nature of the moral agent as a partial whole, i.e. as at once phenomenal and noumenal, so that the ‘must’ of nature and the ‘would’ of reason become the ‘ought’ of morality; but he fails to see what was, I think, clear to Spinoza, that these principles imply that the distinction of phenomena and noumena applies only to the parts and not to the whole, so that though there may be wholes of phenomena, there can be no phenomenon of the Whole; and that therefore every phenomenology must necessarily be inadequate when it is made to do duty for ultimate metaphysics. For the perfect whole, as such, must be free; it cannot be subject to the categories, which govern only the relations between its parts. The parts of nature endure and suffer violence; the whole is eternal and free; and the parts themselves only endure in spite of the violence that they suffer because they are also partial wholes capable of limited self-maintenance."

By 'metaphysical' here, read, scientifically objective. In this usage they are synonymous.

Share
Improve this answer
answered Sep 26 '20 at 22:13
user37981user37981
7
|  Show 2 more comments
0
Want to improve this post? Provide detailed answers to this question, including citations and an explanation of why your answer is correct. Answers without enough detail may be edited or deleted.

We could be objective about phenomena, not noumena.

5
How can adults understand the feelings of infants?
17
Is it possible for a layperson to suitably evaluate scientific disputes?
6
How can we understand the Schematism of the Pure Concepts of the Understanding?
2
How can anyone justify conspiracy theories / scientific skepticism
3
Can you prove a scientific theory is true?
7
Does a priori knowledge exist and can we prove objectivity through it?
5
How can there be multiple “points of view” in the world?