What reason does anyone have to help animals?

I don't know if I should ask this question here (or anywhere).

If it's universally accepted (it probably isn't since it seems nothing is universally agreed upon) that humans should be prioritized over other animals, why should there be veterinarians, animal help organizations, or anything or person that helps individual animals when they could be doing something else that helps humans?

I feel like I'm morally obligated to prioritize humans at least over animals. I don't see any reason to donate to the ASPCA or anything that helps animals when I could donate to help humans in need

If someone believes a human's life is more important than an animal's, then why would that person do anything to help an animal if they could've instead helped a human?

Prioritizing confers benefits of power to another, whether it's an individual or a group as you're suggesting. Are we trying to rationalize our abusive relationship with all other forms of life, including other humans? Why not value all life forms while trying to limit our destructive forces in order to survive? Why not have an environmental contract to include all forms of life, like we have a social contract not to resort to barbarism? As David Hume pointed out over 250 years ago, our decisions are far from logical or rational. We make decisions based on our emotions and then rationalize them.

Many animals are thought to be sentient creatures in at least some degree. Sentience is the main ethical reason advanced for treating one's fellow homo sapiens with moral respect. The greater the sentience of some creature, the more moral respect it deserves.

Consequently there are laws against abusing the higher animals, such as forbidding cruelty and (increasingly) vivisection. These laws apply less to simpler creatures such as worms or insects, which are generally assumed not to be sentient.

Turning to selfish reasons, many animals provide economic wealth, personal pleasure and other benefits to us. In a wider context they are integral to the ecosystem which supports us. Looking after them makes economic, recreational and ecological sense. Getting into the habit is a great place to start, as you will be less likely to do harm by omission later on.

There are of course other more value-based reasons advanced, such as a spiritual or religious duty to care for all living things.

Increasing the survival probability is the first and most important goal. Not because it is a conscious choice, but because no other goal can be achieved without being alive. And it it is conscious, everything an individual can do, it is for survival. Our laws, religions, ethic or moral rules have the goal of regulating our social behavior in order to improve the probabilities of survival of the group (group survival is first). Maslow, Freud or Darwin's doctrines point to that. We improve as persons because that improves our probabilities of group survival (in a tiny, tiny bit, but it is an increment anyway), etc.

So, in the past, and from a short term perspective, yes, it was correct to kill any number of animals in order for a human to survive. So, you were not forced to protect the animals. You could kill hundreds of elephants just to throw their meat and keep their fangs without any consequence.

But that was the past, it is not anymore so. The systemic view of our environment has make us notice that we can't survive alone. We need the animals and all life forms to continue existing if we want to survive. We've learned that short-term views are usually bad foundations to take important decisions.

In consequence, in the long term, and if we want our children to survive, it is imperative to protect the animals. So, if you want your children not only to be happy, but to have the possibility of surviving, you should act ASAP, and do as much as possible to save animal life.

Personally, I believe that in the future, animal life will be prioritized in front of human life. That is simply because the planet is becoming overpopulated by humans, while other species are getting extinct.

Due to comparative advantage, it can sometimes be sensible to work on a problem that is not the most important problem, if you are a better fit for it. For example, if you are particularly skilled at helping animals or particularly motivated to do so, you may be able to help them more than you can help humans.

Moreover, different problems intrinsically have different "yield per unit effort". For example, farm animal welfare generally is a cause that receives startlingly little attention, given the huge numbers of farmed animals in existence and often poor conditions that they live in. Here's a visualization: 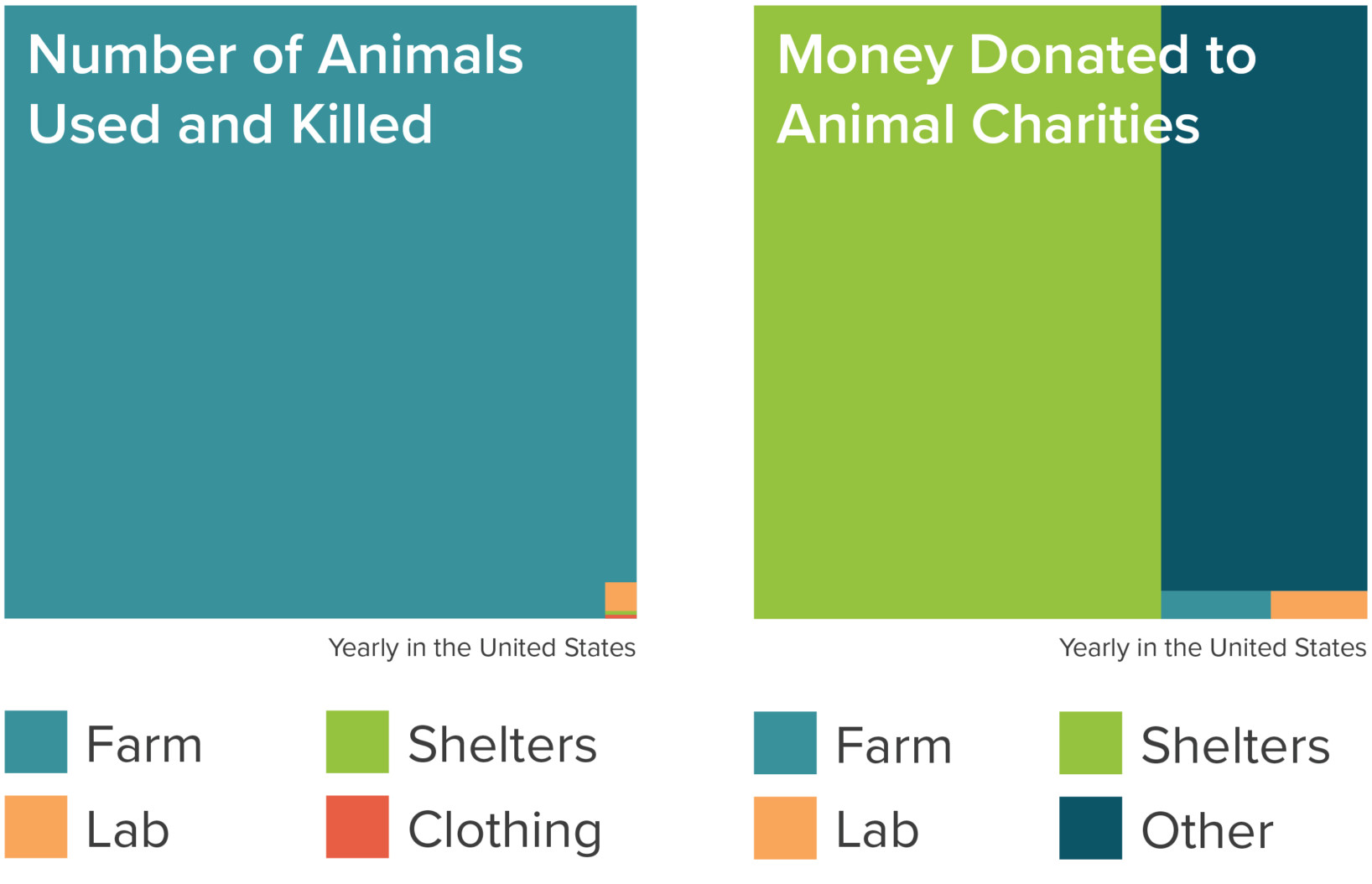 This means that there's often very low-hanging fruit in opportunities to improve the welfare of farm animals, and that means it can be extremely low-cost to make progress, relative to how much it costs to help humans. Even if you believe one human life is worth N (> 1) animal lives, you may find that you can save more than N animals with the same money (or time or work or etc.) it would take to save one human.

All that aside though, I doubt any of this is the explicit justification most people use when choosing a career helping animals. If you're confused about why people do that, I will say two things:

I've taken a lot of interest in effective altruism in more recent years as a better way to answer questions like these. Note that "animals vs. humans" is, in that context, just one of many prioritization decisions you need to make: consider humans in the developed world vs. those in the developing world, humans currently alive vs. humans yet to be born, saving humans from death vs. preventing their suffering vs. improving their economic, social or political freedoms. There's a lot to take in here, a lot to consider. It's a huge challenge, as you'd expect, but certainly some progress has already been made, and there's more yet to make :)

Not the answer you're looking for? Browse other questions tagged ethics moral-skepticism or ask your own question.

16
Is absolute ethical veganism an irrational position?
77
Is it immoral to download music illegally?
0
Is there a name for the philosophy of increasing happiness more than reducing it is the only moral good?
2
Under what circumstances does veganism accept eating plant-based food that indirectly needs animals?
4
Is there any author that argues for radical moral pluralism?
63
Does human life have innate value over that of other animals?
1
How can you soundly argue for antinatalism based on lack of consent?