What does "mind-independent" mean in Hegel?

"Since the world is genuinely independent of our thinking of it, then we must do three things..."

I don't think full quote is needed for my question. I realized (for the hundredth time) that I have a poor grasp of the overall sense of Hegel's unique style of idealism.

In Kant, of course, we have the remnants of a "mind-independent world," in the noumena, but no knowledge about it. My understanding was that Fichte, Schelling , and Hegel were dissatisfied with this dualism. And in Hegel's case he tossed out anything "more real" behind the phenomena. Reason generates a rational ordering of phenomena "all the way down," so to speak. Or something like that.

So what in this general scheme would count as "mind-independent"? My only guess would be that it is what consciousness does not yet know but that will appear of necessity as the concepts evolve. This would retain the self-generative character of his logic and experiences that appear "independently" out of necessity in due course.

In other words, the actual is being generated by Reason, but according to rational necessities that do not "depend" on what is understood at any given, partial stage of consciousness.

Can anyone help clarify? Note, I leave out Burbidge's context because he just uses the phrase "independent of our thinking" in passing, and I trust he is not making some controversial interpretation of Hegel.

It hinges at what we understand under "mind" and "independent". Since spirit can only become as instantiated in individual objects apprehended by minds - coming back into itself in a spiral, dialectical movement as illustrated in the figure below - a reality completely independent from subjects seems nonsensical. On the other hand, there is some truth to it that the motion of spirit in-and-for-itself, its very being, is (and has to be) independent of what we think or like to think about it; it just 'is', as Reality should be. In the end, we (our whole beings) are tiny parts of this movement and it would be weird to state that it was dependent on us. Thus, it is in a meaningful sense "mind-independent" if we take Hegel by the letter.

I think that it is worth having a look into one of my favourites when it comes to German Idealism: The Twenty-Five Years of Philosophy by Eckart Förster (and Brady Bowman), here the beginning of chapter 14, pp. 351-52.

Let me first introduce a figure which Förster makes reference to (The numbers refer to the chapters in Hegel's Phenomenology of Spirit): 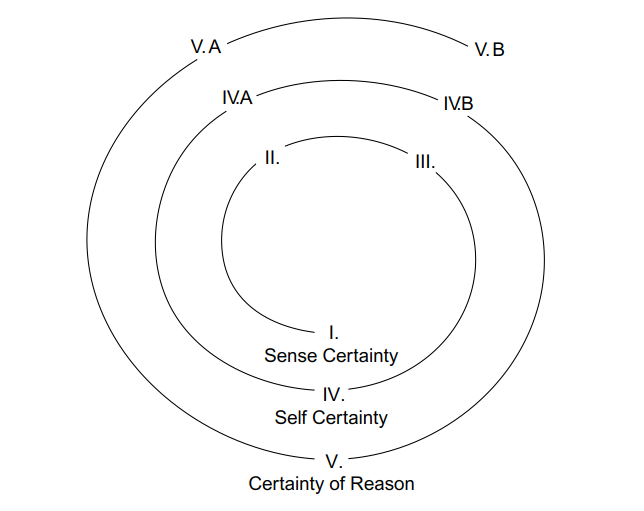 Now to the text itself:

The last circle is not yet complete; only the dialectic of natural consciousness has come to an end. One step beyond section V.B still remains to be taken before the final circle is completed. Natural consciousness, at the conclusion of its dialectic, has arrived at ‘our’ standpoint, that of the philosophical observer. It now knows, as we do, that the opposition of subject and object with which it started has been sublated, and that both subject and object are moments of a spirit higher than either, and that this spirit therefore cannot be identical to just one or the other. This standpoint of spirit, a standpoint beyond subject and object, the standpoint of “absolute” knowledge is the appropriate starting point for logic, but that does not mean that it is identical with “our” standpoint. (bolded mine)

If we take "mind" to be equated to "natural consciousness", which is not too much of a stretch, then we already can establish at that point that any "mind" will, as an individual subject, be different from (absolute) spirit/geist. But let us explore this road a bit further. The following sentence reads as follows:

The logic, as the pure self-movement of the concept, must be able to unfold as though “we” had no part in it.

Now we are closer to what "independent" could possibly mean here. I think it is true that to state that individual minds are completely disconnected from "the pure self-movement of the concept" seems a bit off. At the very least, our minds are the medium of this movement. But let us have a look, with Förster, at what Hegel himself has to say about that:

As Hegel makes clear, this last step from our knowledge to the standpoint of absolute knowing remains to be taken: “Of the moments noted as constituting the concept of knowledge, one seems still to belong only to us and not yet to self-conscious spirit itself, as it must if this is to be its perfectly self-transparent return to self, unadulterated by anything alien . . . This moment, that spirit has returned into itself and is for itself within the object as such, in being, which is opposed to being-for-itself, this moment seems to be only for us who know that I = I, or pure being- for-itself, is self-identity, or being. . . . However, if the present shape of spirit [is to be] its [sc. spirit’s] perfect self-knowledge, this moment must not remain merely our reflection. [GW 9:438-9]”

This is a fragment which according to Förster was supposed to be (or should have been) the concluding chapter of his Phenomenology of Spirit. Let us try to unpack the relevant passages of this quote.

Hegel clearly distinguishes between what "belong[s] only [sic!] to us" and "self-conscious spirit itself". The latter is to be "unadulterated by anything alien". More specifically, if spirit truly is to "return into itself [...], in[to its own] being", it has to be(come) beyond "our reflection".

Thus, I would argue that while there certainly are moments of Reality which we can take grasp of via perception, reflection, and reason, the point stands that Reality certainly is greater than - and insofar independent of - anything individual minds can possibly get hold of and hence there is Reality independent of (individual) minds. Additionally, we cannot influence the becoming of absolute spirit since it is a whole coming to itself, so moments like us will not do much to change the necessity of its movement.

In other words, we may become spectators of Reality unfolding itself (via dialectical processes, i.e. Logic or, being the same in Hegel, science) and agents of Reality understanding itself insofar we contribute infinitely small portions to that as moments of Reality. On the other hand, seeing and reflecting the small part of the Grand Scheme (of which we and our thinking are part ourselves) is everything our mind can possibly be to absolute spirit so that it remains "mind-independent" in a meaningful sense. After all, it is the whole of Reality understanding everything of itself. Something of which we can obviously only get a glimpse.

I would be careful not to identify Spirit with Reason, though, since Reason clearly is a moment of natural consciousness. Also, Hegel did not "toss anything beyond phenomena out", he rather said that the sublation of subjective (phenomenal) and objective (noumenal) moments can become a self-conscious one in several (i.e. four) dialectical cycles, three of which take place in our minds. Being or Reality understanding itself (absolute spirit) is not phenomenal, even if a phenomenological moment is part of it.

Not the answer you're looking for? Browse other questions tagged epistemology hegel idealism or ask your own question.

13
What does Hegel mean by "Quality"?
15
How does Søren Kierkegaard use the word "dialectic" and how does his use of it differ from G.W.F. Hegel's?
19
Is there a parallel between Hegelian "essence" and Kantian "concept"?
1
Do humans have an obligation to ensure that death actually occurs when we think it does?
15
What did Hegel mean by 'world spirit'?
6
Did Kant come to believe that we have access to things-in-themselves after all?
1
Hegel Something-Other confusion
1
Did Hegel logically derive his philosophy?