What is my fallacy? LSAT Reasoning Question: Titanium Ink

Until recently it was thought that ink used before the sixteenth century did not contain titanium. However, a new type of analysis detected titanium in the ink of the famous Bible printed by Johannes Gutenberg and in that of another fifteenth-century Bible is known as B-36, though not in the ink of any of numerous other fifteenth-century books analyzed. This finding is of great significance, since it not only strongly supports the hypothesis that B-36 was printed by Gutenberg but also shows that the presence of titanium in the ink of the purportedly fifteenth century Vinland Map can no longer be regarded as a reason for doubting the map’s authenticity.

The reasoning in the passage is vulnerable to criticism on the ground that:

I don't understand why the author supposedly concluded that the presence of titanium in the ink of the Vinland Map suggests that the map dates from the 15th century and that this conclusion hinges on titanium’s being typical of 15th-century ink, since I don't find that in the text. The following is my reasoning, so please follow it and tell me where my error it:

I am not a native speaker, but my interpretation of the second part of the following sentence:

"This finding is of great significance since it not only strongly supports the hypothesis that B-36 was printed by Gutenberg but also shows that the presence of titanium in the ink of the purportedly fifteenth century Vinland Map can no longer be regarded as a reason for doubting the map’s authenticity.

However, since it was still unlikely, it supports the hypothesis that B-36 was printed by Gutenberg

Let's make that clear with an example:

Now, let's assume Gutenberg used titanium (Ti) for every second print p(Ti|G) = 0.5 and 30 bibles had been analyzed and titanium had been found in two of the bibles of which one was known to be from Gutenberg. Hence, the estimated probability to find titanium in a random bible is p(Ti)=0.07 +/- error (random sample 30 of 100 bibles of which 1 or more are Gutenberg bibles)

The other way round, the Vinland Map might contain some special features (e.g. manufacturing techniques ...) which are found on only 0.01% of the maps outside the 15th century while the probability to find titanium in ink was considered to be much smaller: p << 0.01 Hence, this was a valid reason to doubt that it is from the 15th. However, after updating p(Ti) to 0.1 the probability that the Vinland Map was from the 15th century increased to 90% and thereby the fact that the ink contained titanium can no longer be regarded as a reason for doubting the map’s authenticity.

I checked several forums where this question was discussed and almost all people agreed that the official answer is without any doubts correct.

What is my fallacy?

Both CraiglCraigl and Bumble have done a good job pointing out the two important issues in flaws in your reasoning, and I am going to approach the problem from a slightly different angle.

For starters, it is important to see that there is no Bayesian reasoning presented conceptually in the text. So, what you are looking for is feedback on how your approach to the problem erred. You obviously have mathematical training, and this LSAT question is not testing your ability to formally reason, but rather your ability to use informal logic. Informal logic forces you to read between the lines. In this case, what you must understand is the importance of detecting the enthymeme which in a modern interpretation is applied to an argument with implied or implicit propositions. So, let's expand on CraiglCraigl's comment.

The entire text reduces to the issue of the implications that trace-Ti ink has on document authenticity. The passage can be rewritten as two syllogisms utilizing the deep-structure of the text:

P1. The G bible and B-36 used trace-Ti ink.
P2. The frequency of trace-Ti ink in contemporaneous books is 0.
C1. Therefore, it is likely that B-32 was printed by Gutenberg.

P3. The V map used standard-Ti ink.
P4. The frequency of standard-Ti ink in contemporaneous books is greater than 0.
C2. Therefore, it is likely that the V map is authentic.

Note the trap the author of the question has written using P2 and P4! The author does NOT explicitly make the propositions, but yet they are necessary for reasoning to the two distinct conclusions, AND they seem to contradict each other. This apparent contradiction should create cognitive dissonance in a broader sense. This is the fallacy of equivocation using enthymemes and is meant to determine whether you can use natural language like a lawyer does. How exactly? In the context of the G and B-36 bibles, CONTEMPORANEOUS_BOOKS_1 doesn't actually include the G and B-36 bibles, whereas in the second case with the V map (CONTEMPORANEOUS_BOOKS_2), it does. This ultimately leads the passage to a bad conclusion, because the difference between CONTEMPORANEOUS_BOOKS_1 and CONTEMPORANEOUS_BOOKS_2 is one of opposites. Also, to ensure notice, the author has written the passage to conflate reasoning involving trace-TI detected by the new test and standard-TI ink present in the V-map. How does one draw a new conclusion about the frequency of the V map when the standard-Ti ink was completely irrelevant in the authenticity to begin with? Apples and oranges, as we say.

Ultimately, the lesson to be learned here is that the skills needed to complete this question are informal logical skills using the natural language of English, and not formal logic skills in the artificial language of mathematics. With the emphasis on formal reasoning in math and logic, it is quite easy to try to apply the tools of formality where the language skills dominate because of the relative simplicity of the former in comparison with the complexity of the latter. Just remember, lawyers, ply their trade much more in rhetoric than computation.

Skim in reference for the following argument: 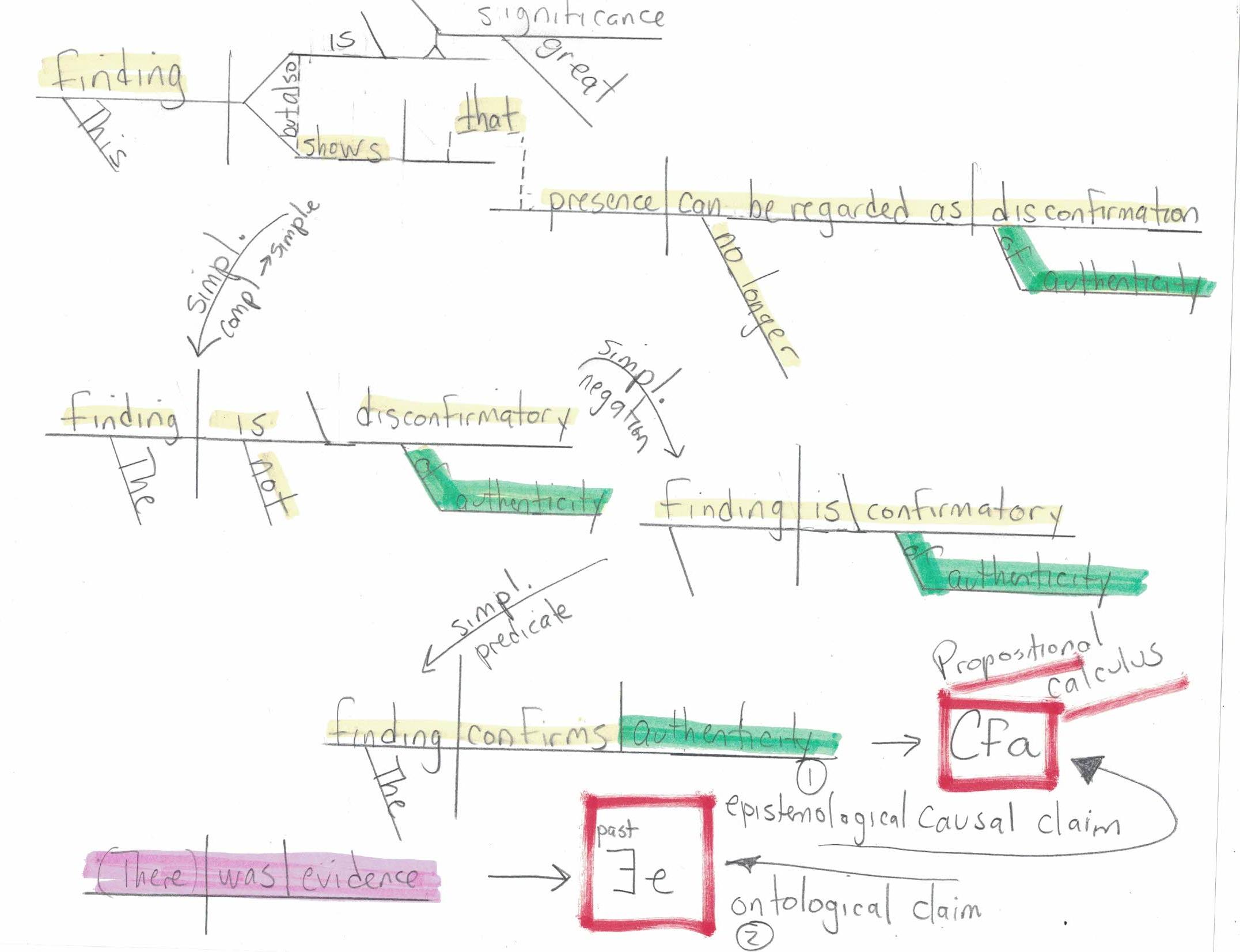 Alright, on lunch, I took a few moments and reviewed your claim that there was synonymy between the sentence in the passage:

This finding is of great significance since it not only strongly supports the hypothesis that B-36 was printed by Gutenberg but also shows that the presence of titanium in the ink of the purportedly fifteenth century Vinland Map can no longer be regarded as a reason for doubting the map’s authenticity.

One strategy for looking at formal language is using what we know in linguistics to consider such claims of equivalency. The diagram above is a technique (rarely taught these days) in elementary school to help us visualize your claim.

Note that the text from the passage is a complex sentence because it has two predicates linked to the subject "This finding". Through a series of steps including eliminating a clause, subsuming the presence of the ink into the finding, dealing with the negation, and ultimately turning the claim into a simple predicate with a transitive verb we wind up with a claim:

Now, immediately, you start your claim with:

So, the conclusion is unavoidable: 'Finding trace-ink confirms document-authenticity' simply doesn't contain or entail the proposition 'There was evidence'. This of course can be restated in plain language.

There is no implicit or explicit proposition in the original passage that claims there was strong evidence (or any evidence) to draw a conclusion about V before the new test. Or, the passage merely asserts the conclusion but does not describe the reasoning to arrive at it.

Who purports? Why? When did this purporting take place? And most importantly, how did they do so? With strong evidence? Really? Where does the passage say that directly or indirectly? The fact is it simply does not. The sentence you drew from claims only that "the finding confirms V authenticity", and does NOT address the methodology of the previous claim to the contrary. So where did it come from?

You. You created the claim based on your understanding of the philosophy of science. It's not an outrageous presupposition, but your claim is irrefutably a hypothetical claim. It could be there was strong evidence, or it could be the evidence was weak. It could be that the evidence was non-existent, and the original claims were mere speculation without empirical grounding. We simply aren't told anything about the evidence regarding V prior to the new test.

So, there's another fallacy in your reasoning, According to Damer in his Attacking Faulty Reasoning, this is a fallacy of missing evidence, and more specifically the Fallacy of the Contrary-to-Fact Hypothesis:

This fallacy consists in making a poorly supported claim... [by] treating hypothetical claims as if they were statements of fact.

And there you have it! In a typical US state's statute on evidence and discovery, your expert testimony as a logician regarding this matter would be objectionable because it assumes facts not in evidence. Good luck!

You say: "There was strong evidence that the Vinland Map was from the 15th century..." but this is not actually given in the question. We are only told that the map's authenticity has been challenged on the grounds that its ink contains titanium and this was previously believed to be unknown in the 15th century.

The quoted author is trying to have it both ways, so A is the correct answer.

There is no fallacy the reasoning is valid.

For the map, it's just a bit more complicated. Here is the original claim:

".. the presence of titanium in the ink of the purportedly fifteenth century Vinland Map can no longer be regarded as a reason for doubting the map’s authenticity"

It doesn't say it implicitly but it sounds like there must have been strong reasons supporting the map's authenticity. Otherwise, the presence of titanium ink, an impossibility, would be regarded as proof of its being a fake, rather than merely as "a reason for doubting". And with the recent discovery, that reason is gone -- a valid statement.

You know sometimes official tests ask questions that aren't very good and we just have to be ok with it unfortunately. Nobody and nothing is perfect including standardized tests. I scored fairly well on standardized tests in high school and myself encountered several "bad questions."

0
Question about information in ampliative reasoning
1
What is this fallacy called?
1
What is the fallacy involved when exempting oneself from the burden of reasoning or proof?
38
Is circular reasoning always a fallacy?
4
Question about the "catch-all" hypothesis as a response to the "bad lot" objection
0
What's the fallacy when someone asks a question and then answers it themselves?
1
What fallacy is this?
3
Would it be sensible to say "I know Santa does not exist"?
1
What makes a fallacy... a fallacy?