Is the material implication the correct model of conditional reasoning in mathematics?

Do you believe that the material implication correctly models the kind of conditional reasoning necessary in mathematics to prove a theorem?

We can also express this idea like this, where A and B are mathematical expressions which are assumed as either true or false:

If you believe that, can you justify your belief?

Now here are some relevant points about how we use, and hence what we mean by, quantifiers and implication in mathematics:

The second is the more subtle one, but this is plainly shown in how we understand statements like the above-mentioned "For all x(if x is a prime >2 then x is odd)." This statement is true, notwithstanding individuals such as 36 (whose corresponding instance has false antecedent and consequent) or 39 (whose corresponding instance has false antecedent but true consequent).

The above argument does have a weakness, however. While there are no instances I'm aware of of an accepted theorem whose accepted natural-language expression involves an "if/then" clause but whose accepted proof is invalid when we interpret that expression using the material conditional, there are instances where a reasonable mathematician would feel weird asserting an "if/then" statement despite its being true according to the material conditional.

For example, consider the claim

By a short argument of Wiles, together with some careful arithmetic, we can whip up a proof of the formalization of X via the material conditional. However, most mathematicians would feel a bit weird claiming X as true. So in principle there is a "market" for alternative interpretations of the conditional in mathematics.

However, this ultimately doesn't seem to carry much weight with the community. There are plenty of situations where a conditional result "If conjecture A then conjecture B" is proved, and later rendered obsolete by either a disproof of conjecture A (often using that conditional result!) or a proof of conjecture B, but is not "retroactively rejected." Ultimately the response of the mathematical community to weirdness like X above is not that it reveals the inappropriateness of the material conditional for mathematics, but rather that it reveals an inconsistency in our own natural language use which we should take pains to remove from mathematical discourse - with the result that ultimately the vast majority of mathematicians accept X as true, albeit silly to the point of disreputability. So ultimately I claim:

Of course it's difficult to prove a claim like this without making a gigantic poll of mathematicians, which I don't have the resources to do. Moreover, even if every mathematician on the planet were in lockstep agreement with me, one could always argue that we're "doing mathematics wrong" in some sense. But at a certain point the onus is on the skeptic to provide something: how do they think natural-language conditional statements, or more relevantly statements incorporating conditionals, about mathematical topics be analyzed in mathematics? Barring a specific claim at some point there's little more to say in my opinion.

Do you believe that the material implication correctly models the kind of conditional reasoning necessary in mathematics to prove a theorem?

Yes. Material implication would seem to be consequence of classical logic.

Here I will justify both the standard truth table, as well as the logical equivalence,

Both are often used to introduce material implication in introductory textbooks.

We can formally prove each line of the truth table from first principles using a form of natural deduction. 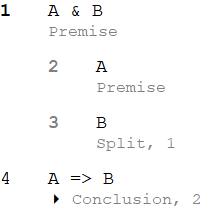 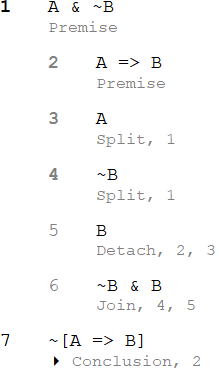 Lines 3 and 4 tell us that if A is false, then A => B is true regardless of the truth value of B. Also known as the Principle of Vacuous Truth, it can be used in proofs about empty sets (hence the name?), and in proofs by cases in which one or more cases being considered are known to be false. I would think that it is not much used outside of mathematical proofs. 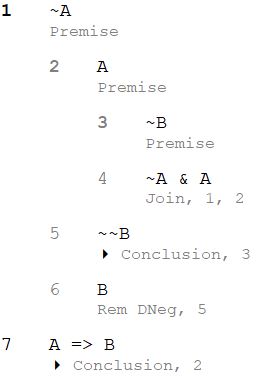 Thus we have justified each line of the standard truth table. 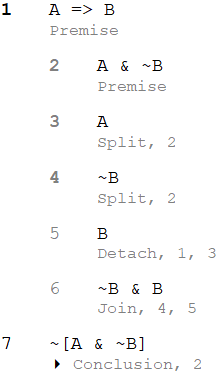 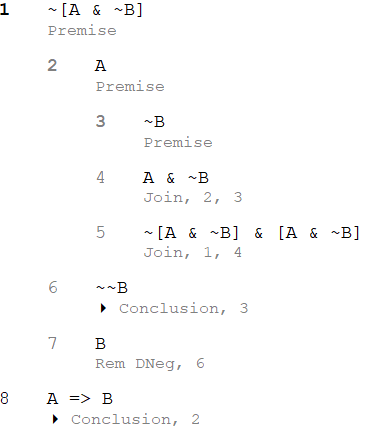 Thus we have established a fundamental theorem of classical logic, the logical equivalence:

Not the answer you're looking for? Browse other questions tagged logic symbolic-logic propositional-logic or ask your own question.

11
What's an intuition for material implication?
5
Suspending some of the usual laws of logic
9
What would you call a counterfactual theory of Justified True Belief?
3
What kind of conditional does Nozick use in his theory of knowledge?
1
How is inference with counterfactuals different than inference with material conditional statements?
6
What does the truth-value of a material implication represent?
1
Why is the statement false: If (A⊃B)∨(A⊃C) is true, then A implies either B or C
2
How to translate "Only dogs and dolphins jump if petted" into predicate logic?
1
Why do people use the material implicaton over alternatives?