What is the exact form of law of non-contradiction that dialetheism rejects?

Dialetheism asserts that there are sentences that are both true and false, e.g. the Liar. This seems to, quite obviously, go against the law of non-contradiction (LNC), and indeed Priest seems to agree.

However, the LNC is actually valid in Priest's logic of paradox (LP):

...the law of noncontradiction. One must be careful here, however, about what exactly this means. What it does not mean is that the formula ¬(P∧ ¬P) is not logically valid (i.e., true in all interpretations). Indeed this formula is valid in the semantics of LP. What it does mean is that we must come to accept some formulas of the form P∧ ¬P, since some of these are indeed true. - Logic of paradox revisited

I am confused. How can the LNC be valid in LP if dialetheism is supposed to reject it? I take it from above that by being valid, Priest meant that the LNC is provable from no premise, and thus is a logical truth as far as LP is concerned? (If the LNC is provable only from a set of premise, that doesn't seem very useful as a law, so I doubt that's the case)

I can find no such proof in Priest's Logic of Paradox paper; I tried looking for a more detailed explanation in In Contradiction and Doubt Truth To Be a Liar, but I can't find anything except a small section (attached at the bottom).

Could anyone clarify what form of the LNC exactly does Priest oppose, and point me to the relevant literature please?

Excerpt from Doubt Truth To Be a Liar: 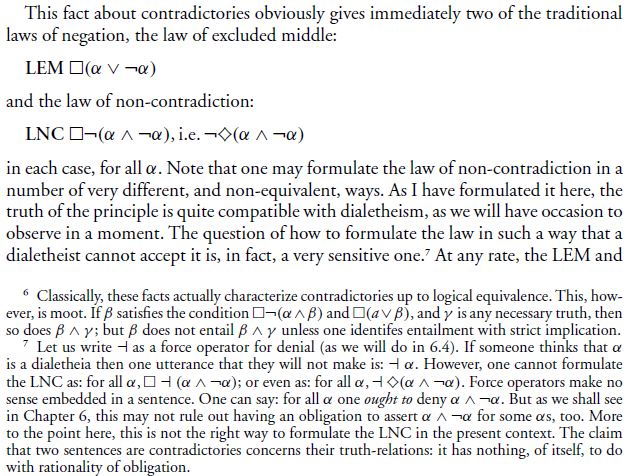 I believe that it is not so much a case of dialetheism rejecting a form of LNC, but rather a case of where LNC is applicable.

For the dialetheist, the Liar sentence has a literal meaning, but it has no content. It does not express a proposition. They say, don’t be fooled by the phrase “This statement”. For example, “The number that is one less than itself” does not describe a number.

As a sentence that is not a propositional statement, they argue that LNC does not apply to the Liar sentence. It is then a straight-forward argument to derive a vacuous biconditional from the Liar sentence - Liar if and only not(Liar).

Not the answer you're looking for? Browse other questions tagged logic reference-request philosophy-of-logic dialetheism or ask your own question.

22
Motivations for dialetheism?
14
What is the difference between Law of Excluded Middle and Law of Non Contradiction?
7
Dialetheias in the absence of contraction/absorption?
2
Russell's Paradox and the Law of Non-Contradiction
1
Semantic rules overdetermine the truth value of Liar Paradox
2
Rejecting the principle that any proposition can be meaningfully negated
1
Reference needed: why is the Liar Paradox regarded as not important/fringe by some?