I don't understand a passage in which the great physicist Ludwig Boltzmann , talking about his epistemological point of view, says

I am of the opinion that the task of a theory consists in constructing a picture of the external world that exists purely internally and must be our guiding star in all thought and experiment; that is in completing, as it were, the thinking process and carrying out globally what on a small scale occurs within us whenever we form an idea.

What is a possible interpretation of this point of view?

Whenever u don't understand some seemingly-deep-but-hard-to-understand quote or words, chances are the author is not talking about any concrete external worldly events, but expresses some internal (inward) subjective intuitions which is certainly hard to fully grasp.

Boltzmann was a well-known inward person without much public communications, I'm not very familiar with his stories, just have the impression that he eventually suicided after prolonged depression caused by his peers. From above his words "constructing a picture of the external world that exists purely internally", clearly from my perspective, he's kind of more inward retrospective than usual outward ambitious to discover, prove or solve any particular problem. His theory notion is nothing but purely internal subjective artistic invention, which is nothing but accumulated bit by bit from numerous small-scale ideas, and which is the guiding star of all outside experiments and peer thoughts serving to complete this internal creation.

Most scientists will be satisfied spending all their life arguing about this type of existence and that kind of non-existence, essentially much like a machine, they'll keep their focus on these outward worldly existences to try to "prove" or "disprove" from their experiences. While for those rare illuminated and enlightened people, inward artistic creation, retrospect and self-reflection is much more important than those outside existence or not. They fully understand when indulging in outward existence discussion the endgame is just to find a place for inward sentiment to attach. Thus to understand and progress oneself accordingly is the ultimate goal and the only important truth for oneself. If he fully understood these, his suicide was totally unnecessary, he could and should find a new life to progress himself...

So in conclusion, he must be a very thoughtful, but depressed original thinker, not a typical school-system educated professional who happened to work in science. But he had his own weakness.

Anyway try to understand a quote out of context is always a speculation, and also English is not my mother tongue, I just described my own understanding based on my own experience and reasoning.

It can be argued that the basis of thinking is never symbolic -- it is always visual. We ourselves — as in "our rational mind", our rational Self — understand something by visualizing it, by creating a three-dimensional c̸o̸m̸p̸u̸t̸e̸r mental model of it, so, in effect, we could run a simulation of that portion of reality in our head. <== And that is how we know things, by acquiring a mental model for it.

"To know your Self, think for yourself." -- Socrates

Only thereafter we turn to symbolic language in order to describe what we saw to others, to share our understanding (just as we use symbolic language to describe -- and, yes, share! -- our actual experiences). The reverse must be true as well -- we can really understand what we have been described with words when we visualize and re-enact that story in our imagination, re-living, to some extent, the storyteller's own experience. 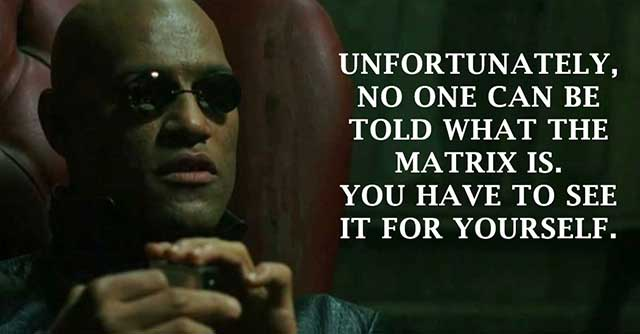 Note the difference between rational understanding/knowing something and having (an irrational) idea of it. Some things can never be known -- for example, no one can know what is a chair — tho most have a pretty good idea of a chair. "Simple ideas" like that (using John Locke's term) are always a product of the neural net in our sub-consciousness. And while the latter can have a very good idea of many things, ultimately it knows nothing and understands nothing -- because, relying on experiences alone, it has no concept of the "outside". And with no concept of objective reality, there can be no concept of truth either!

In a way, our subconsciousness never knows, it merely pretends that it does -- "... for there is no truth in it. When it lies, it speaks its native language." (John 8:44)

That's why, ultimately, -- and it was true for Jesus, as it was for Socrates -- "I cannot teach anybody anything. I can only [try and] make them think."