Is there a “for dummies” construction of the valuation model of the relevance logic R from a De Morgan monoid?

I am confused how one gets the anti-chain preserving negation in Belnap-Dunn's FOUR, which by all accounts underlies their R (which adds implication), when R's valuation model is constructed from a De Morgan monoid... I've read that one eventually drops the monoid identify to get R and not Rt. FOUR's lattice with its De Morgan negation is the one on the left below:

R--the "standard" relevance logic--is not simply that lattice but enriched with an implication table:

As for the def of De Morgan monoid, this can be given in various equivalent ways, but the least confusing formulation, if you want start with the implication (as opposed to negation) as a "basic primitive" is perhaps:

Note that '·' is called "fusion" and is distinct from the lattice join ∧ -- otherwise one gets a Boolean algebra from the above def. The implication connective/operator → is the residuation of '·' fusion (by def, above).

Alternatively, one can take negation as the "built in" primitive, and define → as derived from negation and fusion 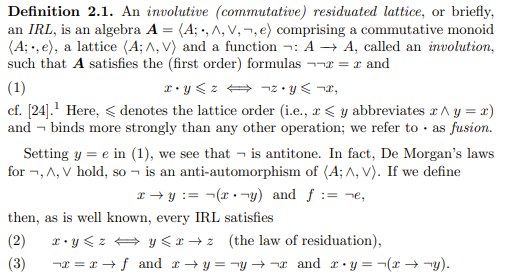 In this latter construction/def, which is more easy to picture as a lattice labelled with the monoid elements as they result (via fusion and negation) from some generators (i.e. a kind of Cayley-graph-like labelling for the Hasse diagram, to account for fusion's role), what is the De Morgan monoid that one starts with to get R (with the implication table given above) though? I thought it might be what's sometimes called D4

...and (confusingly perhaps) also called C3 by others. 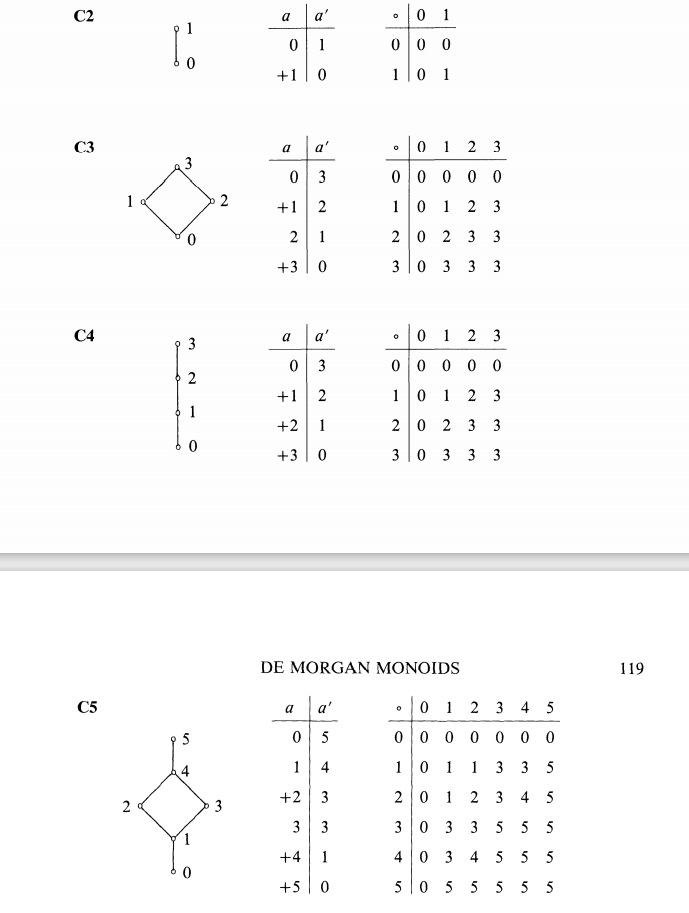 But I'm not seeing how one gets from that the usual properties of FOUR that neither and both are preserved rather than swapped by negation... because in D4 the anti-chain elements are actually swapped by negation! (It's by definition of a De Morgan monoid that f = ¬e):

And in the other paper I found on this (Slanley...) C5, which has 6 elements, seems to have bug/typo in its negation table... so I'm not sure if it's swapping or not its antichain...

So what am I missing, i.e. how one does actually construct R from a De Morgan monoid? Do you start with a 6-element one?

Browse other questions tagged logic or ask your own question.

7
Is Dunn/Belnap's 4-valued system a product system (as a many valued logic)?
6
Is Belnap's four-valued logic technically a relevance logic?

2
Why is this set {CqCpq, CCpCqrCCpqCpr, CCNpNqCqp} the most common set of axioms for propositional calculus?
1
Is model theory (for logic) a kind of type theory?
3
Is the use of inconsistent definitions a logical fallacy?
5
What does the truth-value of a material implication represent?
12
Why did we define vacuous statements as true rather than false?
0
Can anyone tell which one of these sentences are materially implies(implication) and logically implies(implication)?
1
Aristotelean obversion: not vs non-