Name for the concept where gluts are not (necessarily) a filter? (Or do gluts have to be a filter?)

In the following proof (which you'll excuse me, I hope, for giving only as slides/images), it is shown that (the relevance logic) R enriched with (A->B)\/(B->A) --enrichment which the authors call FR-- is still not as strong as RM, meaning that A->(A->A) (aka mingle) still fails in FR. 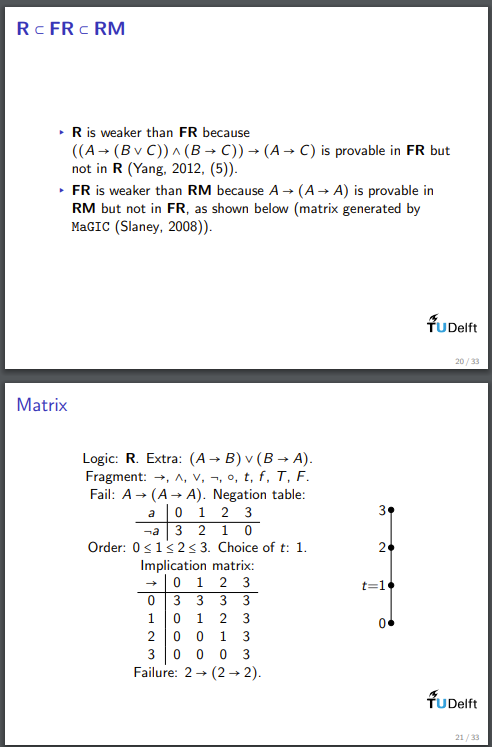 An interesting aspect of this is that the gluts in R are "gappy" in the sense that both 1->1 and 3->3 so both 1 and 3 are possible/designated truth values, but in the model you see there (which is a model for FR, thus also for R, although it's a counter-model for RM) you have that 2-/->2, so 2 is not a truth/designated value. But you'll also note that 2 is in between 1 and 3, so basically the set or truth/designated values {1, 3} is not a filter (in the sense of lattice theory) in that model of R.

So, basically not only there are gluts and gaps in R... but the gluts themselves are "gappy"; in this case 2 is a "gap" in-between 1 and 3.

My question is basically/just: how is notion/occurrence usually called? "Gappy gluts"? Or am I just misreading that and 2 is also a possible designated value in that model of R (because 2->2=1; but in the proof 2->(2->2) = 2->1 = 0, which is really below any designated value)? I.e. do gluts have to be a filter?

I'm not sure what the general answer to my question might be, but from more literature on relevance-related logics, they are considering the set E(A) "the filter (in the lattice sense) generated by the set {x → x : x ∈ A}". So, in the example from questoin, even though 2 is not in the set {x → x} proper it is in its filter (which is upward closed by definition), i.e. 2 is in E(A) for A as in the example from the question.

This filter set E(A), which we might as well call the designated elements (although there's apparently reluctance to do use that term in this regard in relevance logics) is actually used to give algebraic semantics to truth in R as in fairy usual sense of relating the intensional implication → to the "designated values" and the order:

An R-algebra is a De Morgan semigroup A such that for all x, y ∈ A,

32
How is Gödel's incompleteness theorem interpreted in intuitionistic logic?
2
Understanding “Information States” in Epistemic Modal Logics
2
Can we expand the notion of truth in Godels incompleteness theorem?
12
What are the truth-values of intuitionistic logic?
6
What is the explicit reasoning behind proof by contradiction?
0
What does this table regarding the 'connectives' '&' and '~' mean?
1
Why is Truth the default designated value in logic and language?
2
Are there useful logics that reject disjunction introduction?
2
How can one formalize that an argument composed of a true and a false statement is “partly true”?