Has there been any philosophical interpretation (or application) of Stone lattices?

While these have been studied a fair bit by mathematicians (perhaps because their structure is "nice" so a lot of results can be proven about them), have there been any philosophical interpretations or applications of this class of (Stone) lattices?

For example, Dunn's "kite of negations" (which has quite a few variants) never seems to mentions these Stone lattices, although it does mention the both intuitionistic and De Morgan lattices (which are a stronger version of Stone's, meaning that additionally ~~p == p in the latter) as being on "separate branches" so to speak: 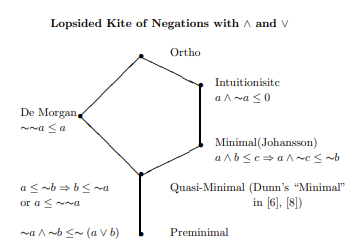 (Or maybe I'm missing something and Stone lattices the are "on the kite picture" by some equivalent axioms?)

I see from the Wikipedia page on superintuitionistic (aka intermediate) logic that the answer is probably yes, although under names that don't refer to Stone (as mathematicians do):

De Morgan's name has been overloaded quite a bit, apparently... Although that's technically an answer, maybe someone can say a bit more than that one liner, i.e. what kind of interpretations has it been given.

Browse other questions tagged logic or ask your own question.

22
Is there any rigorous philosophical basis for atheism?
2
Are there any useful formal propositional logics without any inference rules?
5
Has there been any success in using modal logic to interpret Quantum Mechanics?
1
Does this sacrifice dilemma has a name and has been studied by anyone?
6
Has Putnam's “division of linguistic labor” been developed elsewhere?
8
Are there any books which reduce famous Philosophical Arguments to Logical Notation?
5
Philosophical interpretation of the cut rule of Sequent Calculus
12
Why did we define vacuous statements as true rather than false?
3
Is there any difference between declarative sentences and statements?