What is ethical subjectivism?

I am having trouble seeing how 2 and 3 can be reconciled. So what if half the population believes the sentence: "rape is wrong" describes a true proposition. And the other half believes it doesn't. Is it a true proposition are not? (I'm assuming here that the sentence describes the same proposition regardless of who is saying it. is this a valid assumption?) And why would the attitudes of the people be of any relevance to the truth of the proposition?

So the q is basically this:

how can a value judgment be true or false

Some simply hold that it can. 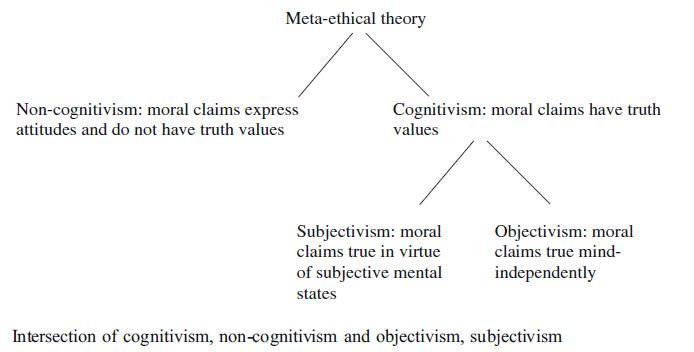 meta-ethical subjectivism as defined by Sayre-McCord (1986) and Snare (1992), is different from non-cognitivism in the following sense—the non-cognitivist takes moral claims to be mere expressions of attitudes, while the subjectivist takes them to be reports about subjective states or attitudes (and hence they are capable of being true or false). Thus, although both meta-ethical subjectivists and emotivists disagree with objectivists, the difference between them is akin to the distinction between someone who in response to a sharp jab says “that hurts” (a subjectivist, cognitivist position which is capable of having a truth value), as opposed to “ouch” (an emotivist, non-cognitivist position, which is not capable of having a truth value).

I haven't looked at those cited works to see their exact arguments for this. (Maybe someone else can detail that in another answer.)

IEP has this to say (in slightly different terminology, but I think it's talking about the same concept):

Meta-ethical relativism holds that moral judgments are not true or false in any absolute sense, but only relative to particular standpoints. This idea is essential to just about any version of moral relativism. Relativizing truth to standpoints is a way of answering in advance the objection that relativism implies that the same sentence can be both true and false. The relativity clause means that the same sentence—say, “slavery is unjust”—can be both true and false, but not in exactly the same sense, since the term “unjust” contains an implicit reference to some particular normative framework. The situation is analogous to that in which one person says “It is raining” and another person says “It is not raining.” If they are standing together at the same place and at the same time, they cannot both be right. But if they are speaking at different times or from different locations (standpoints) this is possible. [...]

A slightly more elaborate taxonomy is given by Pölzler (citing Huemer): 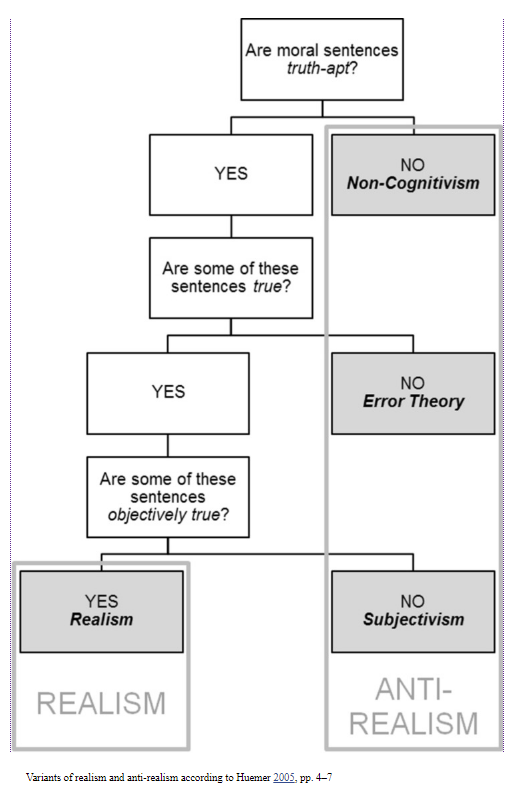 Besides considering error-theory as another way of being anti-realist without being subjectivist (briefly: error theory states that all moral sentences have the truth value of false, just like an atheist would assign false as the truth value to any theistic-affirming propositions), Pölzler also identifies some sub-types of subjectvists.

While realists believe that these sentences are made true by objective facts, subjectivists believe that the relevant facts are subjective. Depending on the particular kind of observer-dependence that it attributes to moral facts, subjectivism can be held in many different variants. The four psychological studies on folk metaethics that [we] considered [...] (partly unintentionally) mainly address individual subjectivism, cultural relativism and response dependence theory.

I should add here that this was clearly an issue that troubled the early utilitarian philosophers as well, e.g.:

[Sidgwick] was, however, troubled by his inability to achieve any such reconciliation between utilitarianism and egoism, the third method of ethical reasoning dealt with in his book. True, Sidgwick regarded it as self-evident that “from the point of view of the universe” one’s own good is of no greater value than the like good of any other person, but what could be said to the egoist who expresses no concern for the point of view of the universe, taking his stand instead on the fact that his own good mattered more to him than anyone else’s? Bentham had apparently believed either that self-interest and the general happiness are not at odds or that it is the legislator’s task to reward or punish actions so as to see that they are not. Mill also had written of the need for sanctions but was more concerned with the role of education in shaping human nature in such a way that one finds happiness in doing what benefits all. By contrast, Sidgwick was convinced that this could lead at best to a partial overlap between what is in one’s own interest and what is in the interests of all. Hence, he searched for arguments with which to convince the egoist of the rationality of universal benevolence but failed to find any. The Methods of Ethics concludes with an honest admission of this failure and an expression of dismay at the fact that, as a result, “it would seem necessary to abandon the idea of rationalizing [morality] completely.”

Yeah, there was (seemingly) no concern back then whether the "egoistic reasoning" involved "true/false" (for oneself) statements vs merely "like/dislike" or "good/bad (for me)" statements.

Also SEP has this to say about whether retreating into non-cognitivism really helps with anything:

But it's worth reading the rest of that page... I'm going to delve on that here. Basically the issue is whether you can really say whether someone who makes consistent judgments holds something to be true.

Although you asked about the [pure] philosophical differences... (which I may not have managed to to fully explain) there surely are observed (psychological) differences when people hold such different meta-ethical (subjectivist vs objectivist) views; as noted in the first paper:

Philosophers have often written as though, in the face of ethical disagreement, objectivists ought to be more open to listening to the arguments of the disagreeing other party (e.g., Snare 1992). If you are an objectivist, you believe that there is a true fact of the matter to be discovered about any ethical belief. As a consequence, when disagreement arises, you should be interested to hear whether the disagreeing other party has any convincing reasons that might change your mind. Even if you are highly confident about the belief in question, you should still be interested to hear an opposing view, in case you have overlooked some pertinent piece of information. But, if you are a subjectivist, you believe that there is no fact of the matter to be discovered, and that the disagreement is essentially a clash of brute preferences. So you should be less motivated to listen to the arguments of the other party.

As a psychological hypothesis, however, this prediction seems implausible, particularly when examining the open-ended responses that objectivists and subjectivists gave when explaining why disagreement may have arisen (see earlier; objectivist: “the other person has no values”, subjectivist: “values are probably the source of disagreement”). Nevertheless, this way of framing the issue does pose an interesting psychological question: when confronted with ethical disagreement, do ethical objectivists respond in a more “open” or a more “closed” fashion than subjectivists? To examine this question, one of our earlier studies asked participants three different questions to investigate their responses to ethical disagreement. [...]

Across all three variables, objectivist responders responded in a more “closed” way in the face of ethical disagreement (Goodwin and Darley 2009). They were less comfortable than subjectivist responders with a person who disagreed with them about an ethical issue, even when controlling for how strongly they agreed with the ethical claim in question. They were also more likely to say that the disagreeing other person was “not a moral person”.

So at least when when you throw in some applied (normative) morality statements, the divergence between the two meta-ethical positions becomes more clear in terms of the implications drawn from disagreement on such applied/normative statements (a sort of "reverse meta-ethics" if you like.)

One SEP page (on relativism) has this to say:

Moral subjectivism is the view that moral judgments are judgments about contingent and variable features of our moral sensibilities. For the subjectivist, to say that abortion is wrong is to say something like, “I disapprove of abortion”, or “Around here, we disapprove of abortion”. Once the content of the subjectivist’s claim is made explicit, the truth or acceptability of a subjectivist moral judgment is no longer a relative matter. Moral relativism proper, on the other hand, is the claim that facts about right and wrong vary with and are dependent on social and cultural background.

Frankly it's not totally clear to me if (on that account) subjectivism as described in terms of merely assigning truth values to moral judgements is contextualist or relativist, or if it's an umbrella term for both... It looks like some relativists argue that a proper subjective assessment is usually relativist, e.g. (same source)

Lasersohn adds (2005: 23) that in order to maintain an authentically subjective assignment of truth-values to sentences containing predicates of personal taste, we must allow that the objective facts of the situation of utterance do not uniquely determine a judge. But who is the judge? Typically, it is us, and when it is, the evaluation is from what Lasersohn calls an autocentric perspective. Importantly, Lasersohn allows that in certain circumstances we take an exocentric perspective when assessing predicates of personal taste: assessing these sentences for truth relative to contexts in which someone other than ourselves is specified as the judge (cf. “Come on, it’ll be fun!” “Is this fun?” (2005: 26); cf. Stanley (2005: 10) for a response to Lasersohn’s program).

Not the answer you're looking for? Browse other questions tagged ethics moral-realism or ask your own question.

1
How is metaethical contextualism different from metaethical relativism according to MacFarlane?

16
Does an education that teaches relativism alone result in students who can not make ethical decisions?
0
Difference between ethical subjectivism and expressivism?
1
What are the ethical ramifications of Revenge?
1
What are ethical rules?
1
What principle of morality can be applied in the case on Hiroshima and Nagasaki World War Bombing?
4
Could Ethical subjectivism be classified as Moral realism if we include God?
4
What is one’s incentive to be moral?