I'm self-learning logic, I'm stuck on an issue similar to this question: In modern logic, why does "All S is P" contradict "Some S is not P"?

Sorry if my questions don't make sense, I'm still wrapping my head around the boolean interpretation. Also, I haven't learned symbolic logic yet, so if you could answer in plain language I'd appreciate it!

Since you keep saying "boolean interpretation", I guess what you mean here is the contrast made in some introductory texts (e.g. Copi or similar) between the interpretations of Boole vs Aristotle given to (so-called) "categorical propositions", such as "All men are mortal". (Which is probably why you also tagged this with "propositional logic".) In modern logic terms, those are not propositions but monadic (i.e. one-place) predicates, so your question is really about predicate logic (as Conifold explained in a comment); "All men are mortal" is saying in predicate logic (under the "Boolean interpretation"): For all x, if x is a man, then x is mortal. You cannot state that in propositional logic, because "is a man" and "is mortal" are one-place predicates and you're not making a statement about a particular man when you say "all men are mortal"--i.e. you need quantification; even Aristotle understood this althogh the terms he used to describe that difference were: universal -- "katholou" vs incidental "kata sumbebêkos", i.e. particular instances.)

As to the question:

Not in the usual/"Boolean" interpretation to such "categorical propositions". It's much simpler too see why in terms of the usual (set theoretical) models of predicate logic, which have a simple interpretation for one-place predicates via set membership, typically depicted as Venn diagrams. There are a couple of ways the "All S are P" is depicted, either using shading for "the area of the set that's supposed to be empty"...

or (less confusingly perhaps), simply showing that S is a subset of P. 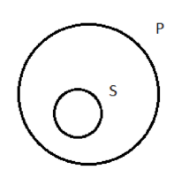 So this is clearly true if S is empty.

Why you might have possibly asked this question in these terms because Aristotle, in his interpretation, considered that statements like "all S are P" imply that S is non-empty, but this (deduction) is invalid in the modern/Boolean interpretation: 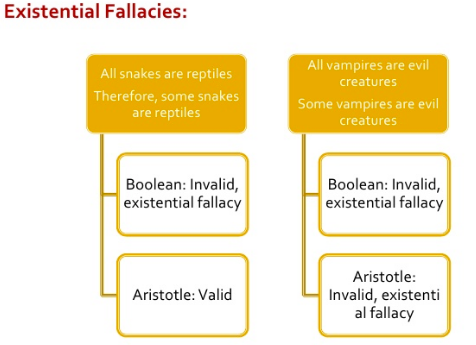 I.e. Aristotle indeed thought that "all S are P" implies that there exist (something) in S, i.e. he presupposed that S could not be empty in such a statement--this is sometimes called "existential import". (It's one of the three "conversions" that Aristotle gave, i.e. from "all S are P" Aristotle would deduce "some S are P", but that's no a valid deduction in modern/Boolean interpretation.) Basically, by "all S are P" Aristotle understood, in modern terms: "There exists [an] x in S and for all x [in S], x is in P".

Another note: "Boolean" is much more commonly understood today as to mean assignment of only one of two (possible) truth values to statements. Aristotle and Boole didn't really diverge in this regard (Boolean valuations) on "categorical propositions". What is usually contrasted with "Boolean" nowadays (and called non-classical logic) is not the issue of non-empty universal quantification but having a non-binary valuation of statements; the latter kind of approach can be applied to propositional as well as predicate logic. (See many valued logics etc. One of the approaches allows assignments of both true and false values to the same statements--this is known as paraconsistent logic[s].)

What Aristotle wanted to address with his interpretation of "All" is dealt with in the area known as generalized quantifiers in modern logic.

As to whether statements with "all" outside of math (or symbolic logic) contexts are to be understood as having existential import, Peters and Westerståhl argue (in their book, but that's ommitted from SEP) that's not (always) the case:

All trespassers will be prosecuted.

There don’t have to be any actual trespassers for this to hold.

In other words, in some contexts people could well mean/imply that there exists something they are all-ing over, but that's not necessarily a sound assumption in general.

Also, if you ask me, some American logic textbooks (especially those aimed at non-STEM college majors, spend an inordinate amount of time/space on Aristotle and "categorical propositions". Outside of that context you'd get a "huh?!" for name dropping "Boolean interpretation" unless you explicitly mention vs Aristotle.)

And you can even find pro-Aristotle gems (in such textbooks) like R. E. Houser's:

universal propositions always assert the existence of their subjects—but that not all things exist in the same way: some exist in reality, some exist in the imagination, some in our thought, and some only in the mind of God.

If am to make a bit fun of this; if you consider the previous (trespassing) example and ask "where are the trespassers?" The answer is "in the mind of men or God"? This mixes logic with metaphysics, to put it charitably.

On a more serious note, a sentence of a first-order language isn't true or false outright (unless it's a tautology or a contradiction). An arbitrary sentence like 'All S are P' (I mean literally that) only becomes true or false when we have interpreted the non-logical constants (in this case S and P) and the quantifiers (as quantifying over some domain, which is also set when you interpret the sentence). That gets to your final point/confusion:

can 'All S is P' be both true and false determined only by the whim of the person making the argument?

Take 'All S are S' (no typo). That is actually a tautology. It doesn't matter how you interpret S; it's always true. As for 'All S are P' that is true precisely in the models where S is a subset of P (not necessarily proper subset, S can coincide with P; likewise, S can be empty). So the 'whim' involved here when one makes an abstract statement like that is that you have to give it an interpretation in a model first, e.g. if S means "is a man" and P means "is mortal" that provides one interpretation that makes 'All S are P' true in that model (assuming the model is the real world). But one can come up with models where it's false, e.g. just take P to mean "lives forever", so you get "all men live forever". Of course, those examples assumed the domain to the "real world"; in some fictional universe [that exists in the mind of someone maybe] men could well live forever. That may seem an obscure point, but logic statements in general are interpreted in some domain that's agreed upon (from some kind of pragmatics context). E.g. it's much less debatable what the truth value is if S means "is even" and P means "is odd", so you say "Every even number is odd"--that's clearly false for the usual integers (although it's true if you assume a model where 0 = 1).

In the standard semantics for the universal quantifier (which is not restricted to classical logic) the falsity of a universally quantified statement of the form 'All Fs are Ps' indeed implies that the interpretation of F is non-empty: It is false exactly if some Fs are not Ps, and so only if there are some Fs.

Not the answer you're looking for? Browse other questions tagged logic predicate-logic or ask your own question.

7
Why are conditionals with false antecedents considered true?
3
In modern logic, why does "All S is P" contradict "Some S is not P"?

2
Conjunctive and disjunctive assertions
3
Satisfaction/validity and variable assignments
0
Is this a valid solution to the liar paradox?
0
Is a definition of logic tautological?
2
Expressive adequacy help
4
Question about anchoring and adjustment (Tversky and Kahneman) and why anchoring often yields correct judgments
2
Does the Aristotelian standpoint agree with the Boolean standpoint on existential import when talking about non-existent things?