How can one formalize that an argument composed of a true and a false statement is "partly true"?

In classical logic if either A or B is false then "A and B" is false. But in natural language it's often the case to hear someone say "that's only partially true" or "that's partly false" as a retort to hearing a sequence of statements some of which are false (often followed by an explanation what part was false).

One way to go at this is if there are truth-value gaps in the logic, i.e. a many-valued logic. However, the existence of gaps alone doesn't entail that the conjunction of true and false is necessarily going to be a gap. In fact, many many-valued logics have it that "true and false = false", e.g. that's the case in (strong) Kleene, or LP, or Łukasiewicz's logic. Even in Belnap's four-valued logic, although it has notions of "neither true nor false" and "both true and false", the conjunction of something that's (just) true with something that's (just) false... is again (just) false. In a comment below, someone suggested fuzzy logics, which are continuously truth-valued (over [0, 1]), but from what I can tell the conjunction of 0 and 1 is 0 in this family: the "conjunctive truth function * [...] must be commutative [and have] (0*x)=0".

I see from a 2003 paper of Humberstone, which I've only looked at very briefly that one approach is to have some kind of operator other than the actual truth valuation defined. (This seems to be a kind of "alternative valuation" of sorts. The paper, which is quite long, doesn't seem incredibly cited, so either the problem I'm talking about about is obscure, or Humberstone's proposed solution to is so...)

So have any logics been proposed in which the conjunction of true and false is a gap, rather than false? Or if not, is there any other way to formalize this notion that can capture that a conjunction of true and false is "partly true", besides Humberstone's operator approach, which seems a bit unsatisfactory as it uses a different "scale of truth" for this sort of evaluation than the main truth-valuation used in the logic?

(N.B: I suspect this comes down to some "deeper" issues like what can be reasonably called a conjunction in a logic and what is "false", because in a [semi]lattice with false as the bottom element, if conjunction is taken as the greatest lower bound on the [semi]lattice, it's inescapable that "false and anything = false".)

One way to go besides Humberstone's approach might start from truth-maker semantics as developed by Kit Fine and other. Let's fix some language of standard propsitional logic and let's take models to be complete join semi-lattices induced by a partial order ≤. Then we can define a relation of exact verification and a relation of exact falsification analagous to some semantics for FDE, with the exception of the verification clause for conjunction: A point s verifies a conjunction A & B iff s is the supremum of points r, t, where r verifies A and t verifies B.

This is only partial answer, but interestingly enough a sort-of-conjunction that would make "true and false" be "neutral" has been considered on 3-valued tables (and in fact [finite] multi-valued/fuzzy logics in general). It's however (obviously) not compatible with the Boolean one. From "A map of dependencies among three-valued logics" by D. Ciucci & D. Dubois.

This is another generalization of t-norms on pre-ordered sets [ref42].

(I've fixed the def looking up the original paper; it's garbled in this review by some missing symbols... but otherwise they give a somewhat more obvious form than in the original, albeit equivalent. Basically the t-operator is non-decreasing in each place and only goes "up by one" at the most, on the chain, in each argument.)

Proposition 4. On three-valued scales, there are only five t-operators: Kleene and Łukasiewicz conjunctions and disjunctions and the aggregation operator in Table 3. 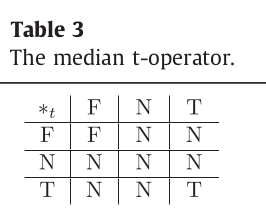 This has quite a trivial structure on the 3-valued chain: it gives the gap value everywhere except for F * F and T * T.

The peculiarity on the operator in Table 3 is that it does not generalize Boolean connectives: F and T yield the third value N. In fact it is easy to see that it is the operation med(x, y, N) computing the median between x, y and N. It is known to be the only associative operation between ∧ and ∨, and a special case of Sugeno Integral.

So if one wants a 3-value "conjunction" to still be commutative, associative, and have this kind of "part-truth" extraction, this is the only option... It's of course obtainable as a derived operator on any functionally complete 3-valued logic.

7
Is Dunn/Belnap's 4-valued system a product system (as a many valued logic)?
1
Does many valued logic hold in unambiguous cases?
4
Why are true and false the only truth values used in mathematics?
2
Are there useful logics that reject disjunction introduction?
3
How do you work with a non-classical metatheory?
1
Does the logical conjunction of a false statement and a statement that doesn't make sense result in a false statement?
9
Is there such a thing as N-valued logic?
2
The intensionality of modal logic