If most numbers are uncomputable, in what sense do they exist?

Computability of real numbers from Turing machine or Church's lambda calculus isn't necessary for a generic existence. According to computable number reference here:

Every computable number is definable, but not vice versa. There are many definable, noncomputable real numbers, including:

1.any number that encodes the solution of the halting problem (or any other undecidable problem) according to a chosen encoding scheme.

2.Chaitin's constant, ... which is a type of real number that is Turing equivalent to the halting problem.

The order relation on the computable numbers is not computable.

Another example is from the fact that the set of computable numbers is not closed under the basic operation of taking the supremum of a bounded computable sequence such as Specker sequence.

Of course, some constructivism schools pursued your similar idea to completely eliminate noncomputable reals for all mathematics, though they're not the majority:

Though the computable reals exhaust those reals we can calculate or approximate, the assumption that all reals are computable leads to substantially different conclusions about the real numbers. The question naturally arises of whether it is possible to dispose of the full set of reals and use computable numbers for all of mathematics. This idea is appealing from a constructivist point of view, and has been pursued by what Bishop and Richman call the Russian school of constructive mathematics.

According to mathematical nominalism, "existence" is reserved for things that exist physically. In this view, neither computable numbers nor uncomputable numbers exist. Mathematics can be sensibly viewed as a what-if scenario: what-if objects satisfying <certain definitions> existed? What would follow from that counterfactual hypothetical?

Note that in the real world we have no Turing machines with infinite tapes, nor do we have infinite time for them to run.

What does it mean for something to exist mathematically? That will depend on whom you ask.

For intuitionists mathematical existence is mostly located in the mind of the mathematician. For them neither computable nor uncomputable numbers truly exist in platonic sense.

I place my finger at a random point on the ruler and go, "THERE." 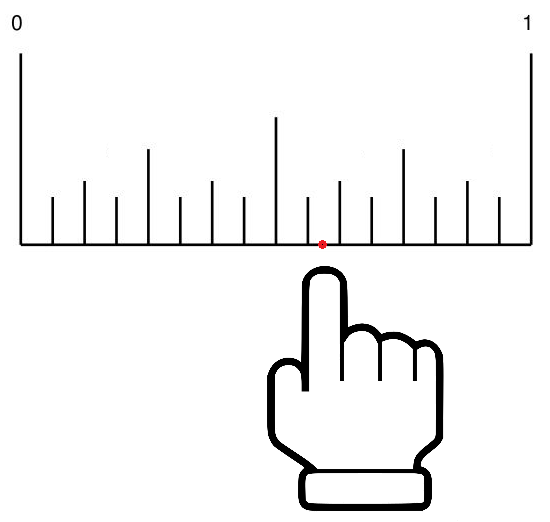 Now, the computable numbers are countable, so they have zero measure on my ruler.
There is a precise technical sense in which my finger has almost surely landed on a point which does not correspond to a computable real number.
Why should the number that that point corresponds to be any less "real", just because there's no algorithmic procedure to write down its decimal digits?
Conversely, if the non-computable real numbers "don't exist", that's the same as saying the location in space that my finger is pointing to doesn't exist. I don't know of any current model of physics, or scientific evidence, that claims that some apparent, indicatable spatial locations are in fact illusory.
(Of course, a subjective idealist might be happy to handwave away the existence of anything physical at all, but to a subjective idealist the only things that exist are minds and concepts, and so a subjective idealist would accept the existence of uncomputable numbers because they exist as concepts.)

1
Existence of numbers on number line

9
What is the philosophical problem with Skolem's Paradox?
1
What would be the philosophical implications of a proof of the Riemann hypothesis?
6
What is the difference (if any) between the concepts of natural numbers and finite cardinals?
1
Existence of numbers on number line
2
Does a Cycle Based Alternative to Set Theory Exist?
1
What are the mathematical concepts a computer implements?
1
Mathematical objects existing as different instances
0
What created the bias in humans that make us intuitively claim the refutation of the Continuum Hypothesis?