If power corrupts, why are we, the general population, so trusting in our leaders?

We've all heard the phrase originally said by John Dalberg-Acton

Throughout history, we've seen many examples of how this phenomenon has manifested. Even in today's world, we live in societies where political leaders rarely listen to the people and thus very rarely act upon the desires of the people. We have also observed many political scandals involving bribery and fraud which have all arisen purely out of self-interest both financially and in terms of power gains. Laws, rules and regulations are often introduced for the people to follow, yet those very individuals who have introduced those laws often fail to adhere them.

The Stanford Prison Experiment of 1971 has come to equivalent conclusions. Without appropriate consequences, those with authority will abuse it.

People might call this summary cynical, but from my assessment, this is basic reality. My question is, knowing that this is the reality we live in, why are there still so many individuals in society who put their trust in these leaders? Why are these individuals so entrusting in policies that are extremely draconian and even go as far as to defend their necessity and desire to have them implemented, even when the implementation of such policies go directly against their interests?

It has also been said to the effect that; "democracy is an appalling system of government. The only problem is, that all the others are even worse."

Trusting our leaders is not as widely prevalent as you suggest. Toleration is the norm.

I suppose we would need to insert some context and evaluate just how true this may be. Sometimes not everything is as it seems, unfortunately. However that is not to say that there are not any examples of corruption so obvious throughout the history of the world as we know it. Unto what degree of freedom that power can be exercised by a person is a concerning matter indeed and history has shown time and time again that many have taken it too far.

I suppose an example that one could use where it may not be so obvious would be espionage. Machivellian tactics are utilized in this domain (double, triple agents, etc.) where a presumably good person may have to get their hands dirty in order to clean up a mess, so to speak. That is how it can start and they may dig themselves so deep into a hole that they practically become the enemy that they were intending to subvert further perpetuating the purported corruption that they were trying to extinguish; whether by will, fear or to prevent their cover from being blown. This of course falls upon how "goodness" may be defined in this particular situation and herein lies the problem. This is where the "road to hell is paved with good intentions" and where those involved can potentially become pawns in a chess game and because of our inability as civilians to know any better we conclude that the outcome of such activities more than likely were a result of corruption to begin with. Which may or may not be true for we do not have access to top secret clearances necessary for us in order to know the circumstances. As civilians we are not expected to be totally aware of propaganda whether it is counter or otherwise. Does not change the fact of what it is at the end of the day regardless of who it is coming from. We must ask: "why?" and take with a grain of salt the answer given but not everyone does.

With that said, and I am not sure how true the following may be for other countries, but I suspect that when it comes to politics, regardless if there is a democratic process or not involved in same that one thing that is difficult to change is foreign policy and if the advance of such policies heavily rely upon the tactics mentioned above then we have to wonder whether or not the ends justify the means. Sometimes I hold a cynical view as well and see that the world would probably be better off without these agencies who must have enough monies to do what they do; whether that be through due process or through the set up of some "cash cows" in some clandestine manner. I think every rational person would say that such funds would be better invested in education or infrastructure, etc, but their position would be that there would not be any if there were not a line of defense against foreign intervention.

This is all a generalization for the most part and I surely am playing Devil's Advocate here but if the mission statement of such agencies were to protect citizens overall then one would have to make a choice. Either you trust them or you don't because you can't know all of what they are doing and that level of ignorance can be a two-way street between justice and the obstruction thereof; according to them at least.

I know I want to believe in my leaders, despite how difficult that truly may be, I think the best way to go on about it is to be as dialogical as possible. Hope for the best and expect the worst because many times we never really come to know about their associations until it is too late. How do we resolve such a situation? A kind of collective sousveillance of each other and the government? Sometimes it seems like that would be the only way though I could never support such an idea.

I wouldn't call it cynical, so much as shallow.

"All governments suffer a recurring problem: Power attracts pathological personalities. It is not that power corrupts but that it is magnetic to the corruptible." - Frank Herbert

I prefer this version.

We have representative democracy, not direct democracy. Brexit is a classic case of how direct democracy allows demagogues to rile people up to vote against their interests. See the history of ancient Athens for more of the problems with direct democracy. In a representative system politicians are meant to serve people's best interests, not their momentary will. The public often don't understand the issues, like say the death penalty: far more expensive than prison, prone to unfixable injustice, and proven an ineffective deterrent - it's a bad idea, and other than Saudi Arabia & Texas nearly everywhere in the world is stopping doing it. But in many places, people would still vote for it (48% in the UK as of 2015, probably enough to get it returned in a referendum).

"Many forms of Government have been tried, and will be tried in this world of sin and woe. No one pretends that democracy is perfect or all-wise. Indeed it has been said that democracy is the worst form of Government except for all those other forms that have been tried from time to time." - Winston S Churchill, on 11 November 1947, 2 years after being voted out of office by a landslide, despite leading to victory in WW2

What most citizens want, is to not have to think about governance. They just want things to work, and only pay attention when they don't. For that we need consequences to bribery & fraud, and lying. We need innovations in our systems too: rank-choice voting to allow outsider voices more chance, and Citizen Assemblies where a representative jury of people have to listen to evidence on a political issue then make a decision, like a court case, are good examples of improvements. We can't expect perfect leaders, or a perfect system, it's about avoiding or getting rid of the worst, and reforming to avoid repeating failures.

The Stanford Prison Experiment was bad science, done badly, and completely unravelled when replication was attempted. Well conducted versions, show opposite results. Research generally shows humans are highly altruistic, and seem to have evolved to where we are through the highest degree of eusociality in any animal outside of the social insects. It is our cooperativeness which defines us, & the ability of strangers to work together that we have now, in the last half century, is unprecedented.

The contrasting views of human nature held by Rousseau & Hobbes, are good illustrations of how our formative years shape our views, and that we tend to see others in the way we see ourselves. An optimist tends to be an optimist about human nature. A pessimist & cynic the converse. 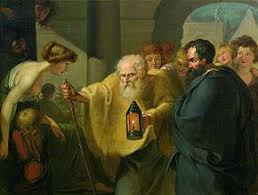 Not the answer you're looking for? Browse other questions tagged politics or ask your own question.