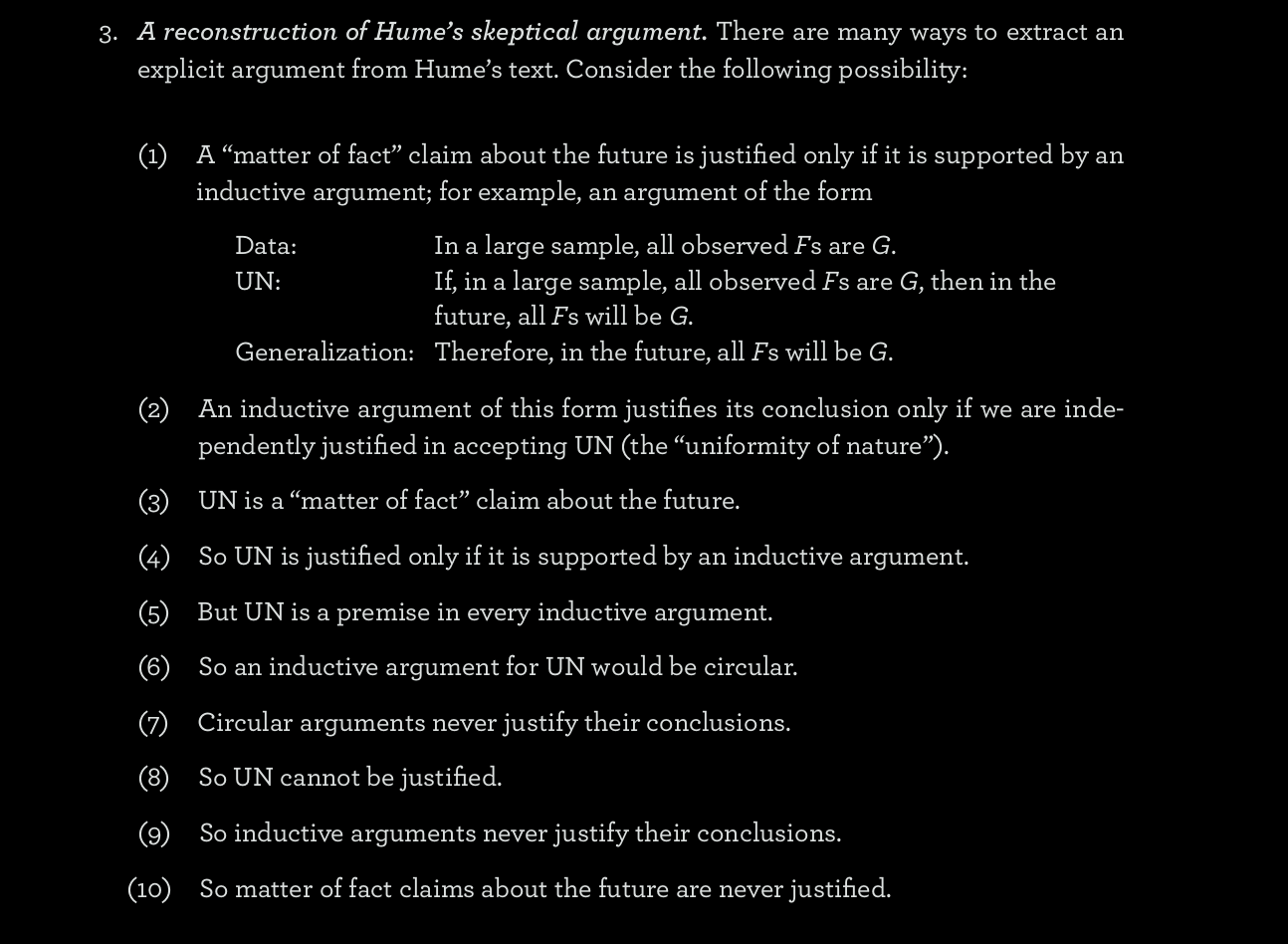 Hello everyone, i was going through this reading of a book in which it present Hume's induction wrong using circularity . I was trying to find some error in it as given there but could not pinpoint the exact mistake . However i feel conclusions 5-10 are clear of any mistake. Can someone help or is up for a discussion on it?

If you look at the Stanford Encyclopedia of Philosophy page on "The Problem of Induction", the argument you quote is a formalization of the "second horn" of Hume's dilemma about our having no firm grounds for trusting inductive inferences. The first horn is about how there is no good "demonstrative" argument for induction from principles that we feel totally confident in a priori akin to axioms of some area of math like arithmetic. The second horn is about how we can't make an empirical or "probable" argument from experience to support the idea that induction is trustworthy, since such an argument would have to presuppose the very thing it's trying to prove, and thus would be circular.

If you look at the various responses to Hume in the SEP article, I don't think there are any philosophers who have argued there actually is a fallacy in the second horn of Hume's dilemma, i.e. there's no one who actually takes the position that we can be confident induction will work in the future solely because we've seen that it's worked in the past. Most responses either attack the first horn and say there is some a priori reasoning that leads to the conclusion that induction should work, or they just say that induction is not something we can have an argument for but something that we basically just have to presuppose when making any argument that isn't purely logical/mathematical, perhaps because it's built into human consciousness to presuppose such a principle (which I think was basically Kant's view, see this answer), or perhaps because it's just part of some normative rules of linguistic argument that we have to mutually accept if we want to talk to other people (which is how I would interpret Wittgenstein's response in section 5.2 of the article).

At academia.edu I posted a paper that argues for noncircularity. “Induction and the Uniformity Principle; derivation of the principle from fundamental axioms”. The argument is that the Laws of Thought, taken together, show the validity of the Uniformity of Nature. https://www.academia.edu/41240897/Induction_and_the_Uniformity_Principle_derivation_of_the_principle_from_fundamental_axioms

Here is the abstract:

Not the answer you're looking for? Browse other questions tagged epistemology fallacies argumentation hume induction or ask your own question.

8
How does Kant respond to Hume's problem of induction?