Tarski's sufficient conditions for the Liar paradox and self-reference

Tarski gave three sufficient conditions in his 1944 paper The Semantic Conception of Truth for the Liar paradox to occur:

But then Tarski claims that condition 3 is actually not needed, as there are ways to deduce a contradiction from the Liar with just the first 2. (I don't quite get the example Tarski gave, but I take it that something like the following also work: 'Alan: What Boris said is true.', 'Boris: What Alan said is false.')

My questions are as follows:

a) Did I understand condition 3 correctly? (i.e. Cond 3 is indeed about self reference being possible?)

b) If I understand cond 3 correctly, isn't it implied by cond 1? If a language has names for its own expressions, surely that is already sufficient for expressions to refer to themselves?

In case I interpreted Tarski wrongly, here are the excerpts: 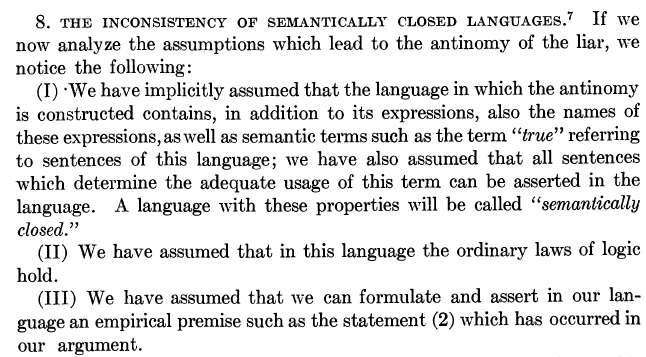 Maybe we have to consider what Alfred Tarski is trying to achieve [ref. to the English edition of “Der Wahrheitsbegriff in den formalisierten Sprachen” (1935)].

The purpose is (page 154) to show the difficulties involved into the definition "of truth in the colloquial language".

Then he shows (page 157-on) how to reproduce the Liar starting from the above definition of "... it is true" and unobjectionable logical moves (like substitution) that we can perform in current logical systems, like predicate logic or the common (at Tarski's time) foundational system called type theory.

The starting point is to build the well-know self-referential statement, denoted with 'c' in the 1935 monograph:

"the sentence printed on this page,..."

"'s' is identical with the sentence printed in this paper..."

With them Tarski build in 1935 the statement:

for all p, if c is identical with the sentence 'p', then not p,

The general formulation that Tarski achieves is formalized into Monika Gruber, Alfred Tarski and The Concept of Truth in Formalized Languages (Springer, 2016), page 23:

from which a contradiction follows:

In both versions, Tarski add the seemingly puzzling note:

We have assumed that we can formulate and assert in our language an empirical premise such as the statement (2) [in 1944 or (c) in 1935] which has occurred in our argument.

What does it mean? that we can formulate in exact and general terms the self-referential sentence avoiding reference to line numbers of a specific text, that obviously change already from edition to edition.

Also a proposal based on the use of "human index", like Alan and Boris or Epimenides will be subject to the same limitations.

You could propose a new kind of logic in which a statement xan be true and non true at the same time. For the same kind of truth. This is what Tarski does. So if I say that I'm a liar I can be both right and wrong. If I'm a liar this will be true and if I'm not it will be false. The sentence on it's own can be true or false and is not self contradictionary.

5
Why is Tarski's semantic theory of truth formally correct and materially adequate?
1
Does later Wittgenstein think that the pragmatic test for meaning is a determinant of semantic content to the exclusion of any other determinant?
6
Frege's Argument About the Sense and Reference of a Sentence
3
What is the relevance of Kripke’s modal argument against Frege’s description theory of names?
6
Is there a natural example of a non-self-referential semantic paradox in philosophy?
1
Is T-schema just another name for Convention-T, or are they two different things?
0
In the context of philosophical logic, what does 'extra-logical' mean?
0
The Indexicality of "Ask this question?"