I've encountered a strange argument in an article, and I don't quite understand what the author means. 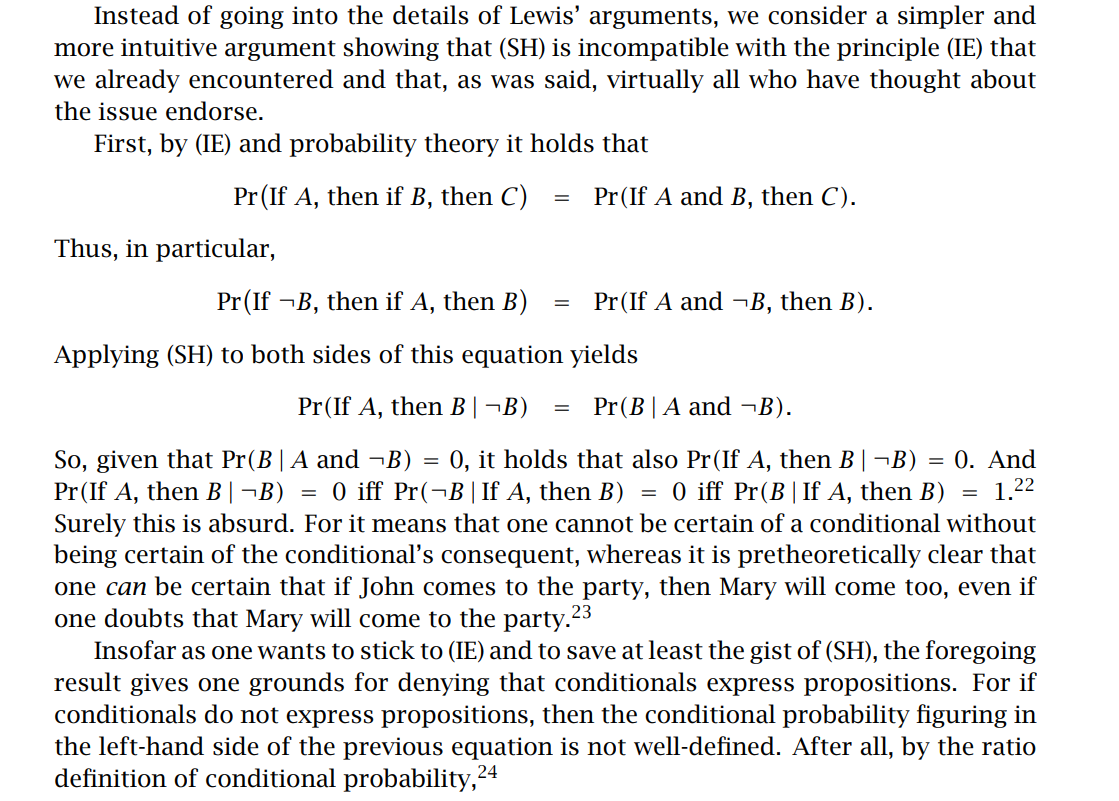 Could someone please help me understand how the author is justified to be making these conclusions?

It might help to provide some background here. This discussion is part of an attempt to give an account of the meaning of conditional expressions, particularly those where the antecedent might or might not be true. Stalnaker proposed back in the 1960s that uncertain conditionals should be understood as statements of conditional probability. I.e., the appropriate degree of credence that attaches to "if A then B" is given by P(B|A). This works fine in a lot of cases. It agrees with our simple intuitions about uncertain conditionals, and it is consistent with work done in the logic of uncertainty and in decision theory.

This appears to have been first proved by David Lewis back in the early 1970s. Some theorists have taken it to punch a hole in the Stalnaker account, since if P(B|A) is meant to represent the probability of "if A then B" and P(B|A) is not the probability of any proposition, then it follows that conditionals are not propositions. Others have embraced this consequence and accept that conditionals are indeed not propositions. Notable examples among these are Ernest Adams, Dorothy Edgington and Richard Bradley.

It is strange at first to think of conditionals as things that are not propositions, and hence don't have truth values. When studying logic 101, the first conditional you are introduced to is material implication, and this does have a truth value and is in fact a simple truth function. But material implication is a narrow and specialised kind of conditional and does not accurately reflect the meaning of most ordinary language conditionals. The position defended by Adams, et al, is sometimes referred to as the suppositional account of conditionals, and it can be thought of as holding that it is not the conditional "if A then B" that has a truth value, but rather that B has a truth value within the suppositional context A. When we say of a conditional that it is true, this is a slightly elliptical way of saying that B is true within the context A.

Now back to the passage you quote. Douven presents a simplified alternative to Lewis' proof, making use of the import-export principle. This is the principle that the right-nested conditional "if A, then if B then C" is always equivalent to "if A and B, then C". Despite what Douven says, this is not endorsed by virtually all who have thought about it. It is actually a controversial principle to which there are arguably exceptions, especially when we think about conditionals in possible world terms. Nevertheless, if we allow it, then, like the Lewis proof, it shows that conditional probabilities with nested conditionals collapse into triviality.

Not the answer you're looking for? Browse other questions tagged philosophy-of-language or ask your own question.