In his remarkable works (1,2 and their later development 3) Thomas Breuer proves by diagonalization the phenomenon that the observer cannot distinguish all phase space states of a system where he is contained, a theorem paralleling the famous incompleteness theorem by Gödel.

In (3) he gives the following illustration: 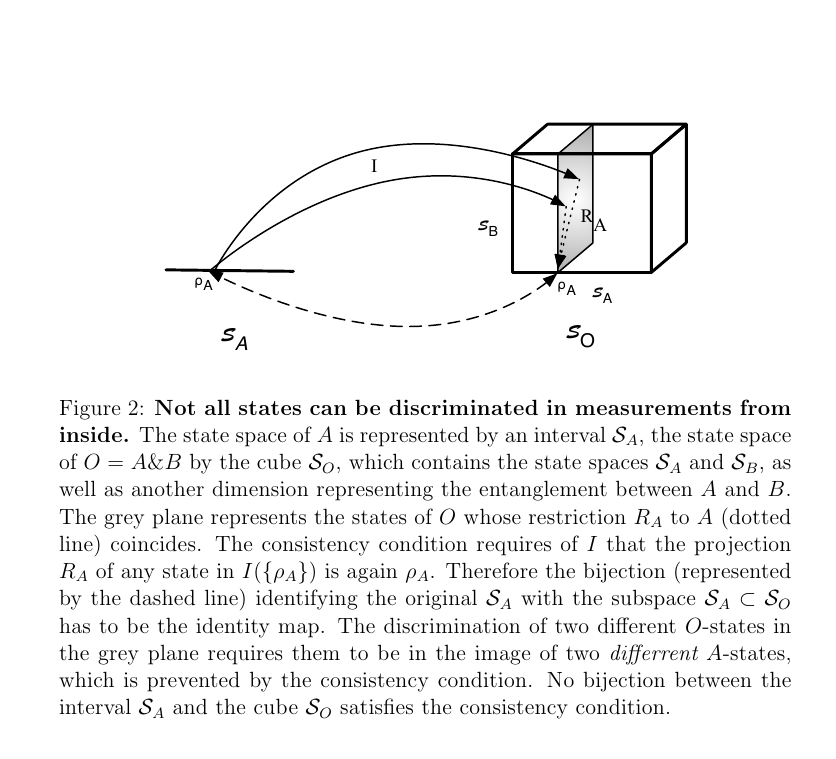 More fundamentally, Breuer concludes that neither deterministic nor probabilistic universally valid theories are possible: no theory can predict the future of the system where the observer is properly included.

Non-self-predictability implies that, even in a deterministic theory, accurate predictions about subsystems of the universe may at most be feasible for some observer, namely for one outside the system whose behaviour is to be predicted. But there will be no observer able to predict everything accurately. Every deterministic theory must admit the existence of unpredictable events when a predictor applies it to himself. Even in classical mechanics with a deterministic time evolution we have this kind of unpredictability.

I believe the conclusions of non-self-predictability and non-self-measurability are correct. In this chapter, they will follow in a more general framework from the fact that no observer can obtain or store information sufficient to distinguish all states of a system in which he or she is contained.

This is mentioned in Stanford Encyclopedia of Philosophy along with a similar result by Marisa Dalla Chiara.

But recently I have encountered the essay by Scott Aaronson "The ghost in the quantum Turing machine" where he discussed the problem of free will. In his essay, he references the famous argument by Peter van Inwagen who argued that neither determinism nor randomness is compatible with free will (the part about determinism is known as the consequence argument, the full argument can be found in his monograph "Metaphysics"). Since Peter van Inwagen does not consider other theories than probabilistic and deterministic, he concludes that free will is impossible (quite a surprising conclusion for a Catholic professor).

In section 3.3 of his essay, Aaronson introduces the idea of "freebits". A freebit in his words is simply a qubit for which the most complete physical description possible involves Knightian uncertainty.

Thus, by the freebit picture, I mean the picture of the world according to which

The Knightian uncertainty is a term borrowed from economics to describe systems whose states have uncertain probability. A formal way of dealing with such variables is described by Dempster-Shafer theory, and in the appendix, Aaronson gives a formal description of freebits.

In this light, it is worth mentioning the idea that Breuer's self-referential uncertainty can also be traced to the initial state of the universe. In his article Ignorance of the Own Past Breuer proves that for an observer the past of a system where he is properly contained (such as the universe) is uncertain due to self-reference. The bad side in this argument is that the proof relies on the explicit assumption of determinism.

It should be noted though that the idea that free will may have self-referential nature is rejected by Aaronson on the grounds that in his view it amounts to solipsism. As such, he strives to ascribe free will to all animated beings, a position which seems to me unjustified. At best it looks like an attempt to artificially stretch a physical theory to fit a certain philosophical belief.

On the other hand, it seems, subjective decoherence perfectly fits the definition of freebits. Since not all states of a quantum system (represented by a wave function, that is, probability) can be discriminated from the inside, such system seems to possess Knightian uncertainty, and as such, the freebits.

It should be noted that a theory dealing with uncertain probability, such as Knightian uncertainty (some call such theories "possibilistic" contrary the "probabilistic" theories, you can learn more about such theories in the comprehensive monograph on Generalized Information Theory by George Klir), would overcome the objections raised by both Breuer and Peter van Inwagen. Thus a universally-valid possibilistic (rather than probabilistic) theory would not be impossible even if Breuer's argument is correct. It also will not contradict the existence of free will as understood by van Inwagen. A drawback of such theory would be even smaller predictive power than that of a probabilistic theory.

That said, I wonder whether the idea of freebits, and Dempster-Shafer theory in general, is applicable to the description of the phenomenon of subjective decoherence.

I need stuff to calculate and to measure. The particles involved in these processes are not considered in the calculation of all particles' trajectories.

If the observations and calculations are done outside the wanted domain, you have to interact with this domain, thereby making it part of the domain. If an observation is made, say of the velocity of a classical particle, you change the system in a way that makes it different from the system you want to make predictions about. So to know how the unperturbed system (domain) evolves is like playing God.

If I am part of that unperturbed system I can interact with all particles without someone outside, or me inside, being able to predict. Of course I can predict local states of affair. I can force particles in a well-defined stateand calculate how it evolves.

Essentially the same holds for quantum mechanical systems of particles.

I can calculate the future of an observer in an isolated space but then I will never be able to tell. I must keep her isolated forever. If I tell she will behave differently from what I calculated.

Not the answer you're looking for? Browse other questions tagged epistemology philosophy-of-science metaphysics free-will quantum-physics or ask your own question.

18
Can a lack of knowledge or understanding invalidate a positive claim?
2
Do ego-asymmetric theories invalidate the scientific method?
10
What is the ontological status of information that is permanently inaccessible to any conceivable observer?
8
Is free will a third option aside from chance and necessity?
12
How does Quantum Mechanics affect the modern account of free will and determinism?
6
In what type of world is free will possible, if at all?
3
What kind of philosophy of the foundations of physics can there be?
1
Is there any theory of consciousness that extends conscious existence into the future?
1
Could free will exist as spontaneous particle creations?
1
Would quantum uncertainty in neurons mean free will or just random will?