Feynman's name of the bird

Consider this quote by Richard Feynman (from "What Do You Care What Other People Think?": Further Adventures of a Curious Character, edited by Ralph Leighton, 1988, available at archive.org):

The next Monday, when the fathers were all back at work, we kids were playing in a field. One kid says to me, "See that bird? What kind of bird is that?" I said, "I haven't the slightest idea what kind of a bird it is." He says, "It's a brown-throated thrush. Your father doesn't teach you anything!" But it was the opposite. He had already taught me: "See that bird?" he says. "It's a Spencer's warbler." (I knew he didn't know the real name.) "Well, in Italian, it's a Chutto Lapittida. In Portuguese, it's a Bom da Peida. In Chinese, it's a Chung-long-tah, and in Japanese, it's a Katano Tekeda. You can know the name of that bird in all the languages of the world, but when you're finished, you'll know absolutely nothing whatever about the bird. You'll only know about humans in different places, and what they call the bird. So let's look at the bird and see what it's doing-that's what counts." (I learned very early the difference between knowing the name of something and knowing something.)

This is quite a deep insight. Which philosopher is best known for emphasizing a distinction between knowing the name of something and knowing something?

I find Feynman’s example a bit confusing. If a translator knows what “brown-throated thrush” is called in different languages, he still may be completely unable to identify a bird as a brown-throated brush.

For this, at least an identification-skill is necessary, to look for salient features and not confuse the bird with other kinds. We simply prove having this skill to others by giving the name.

And some basic knowledge comes from the fact that the kinds or classes of things that we dignify with words in a language, involve some sort of connection or similarity.

Especially in this case, since we’re talking about a biological species.

Anyway, the most modern philosopher I know, who arguable talked about this distinction, is C. S. Peirce.

In “How to Make Our Ideas Clear,” Peirce distinguishes three grades of clearness. An idea reaches the first grade when it “will be recognized whenever it is met with, and so that no other will be mistaken for it” (W3:258). This first grade can be exemplified by a seasoned pawnshop owner’s idea of gold. His idea of gold allows him to recognize that an object is made of gold the moment he sees it, and it allows him to interpret sentences that contain the word “gold.” All that is needed to attain this first grade of clearness is familiarity with gold objects. Though this first grade of clearness is primarily a sensuous clearness (R254:6), it need not be narrowly empirical. One can obtain a clear idea of unicorns, electrons, or the trinity by becoming familiar with how these concepts feature in our language and culture. […]

Merely having familiarity with an idea, however, is in Peirce’s view not sufficient for the precision and logical security that is typically required in science and philosophy. The second grade of clearness seeks to accommodate for this. It is reached when the idea is not merely clear but also contains nothing that is not clear. We attain this second grade when we provide “an abstract logical analysis of it into its ultimate elements, or as complete an analysis as we can compass” (CP6.481). The definition of gold as the chemical element with atomic number 79 is an example of this. Here, the abstract definition steers our understanding of the concept. […]

A problem with abstract definitions, however, is that they become disconnected from experience. With his third grade of clearness, Peirce seeks to accommodate for this by returning to the world of experience while retaining the precision gained at the second grade. Peirce famously casts this third grade in what is now called the pragmatic maxim:

Unless the maxim shows a conception to be vacuous, application of the pragmatic maxim to ideas at the second grade of clearness renders what Peirce calls a pragmatistic definition, which he defines as, “a definition by means of characters that might conceivably influence rational conduct” (CD 11:348). In his Syllabus for the 1903 Lowell lectures, Peirce gives as an example the following pragmatistic definition of lithium:

If you look into a textbook of chemistry for a definition of lithium, you may be told that it is that element whose atomic weight is 7 very nearly. But if the author has a more logical mind he will tell you that if you search among minerals that are vitreous, translucent, grey or white, very hard, brittle, and insoluble, for one which imparts a crimson tinge to an unluminous flame, this mineral being triturated with lime or witherite rats-bane, and then fused, can be partly dissolved in muriatic acid; and if this solution be evaporated, and the residue be extracted with sulphuric acid, and duly purified, it can be converted by ordinary methods into a chloride, which being obtained in the solid state, fused, and electrolyzed with half a dozen powerful cells, will yield a globule of a pinkish silvery metal that will float on gasolene; and the material of that is a specimen of lithium. (CP2.330)

– Cornelis De Waal: Peirce: A Guide for the Perplexed

Plato's Socrates in Plato's Dialogues. Went around asking folks who spoke a lot about "justice" and "courage" and such what they knew about the meaning of the term and unveiled that they didn't know what the term they were using meant. But it's been a timeless theme in the Western philosophical tradition since then, and there are countless angles to approach it from.

On the face of it, it calls for no specific philosophy to value the workable knowledge of a thing above parroting its name pretending to knowledge; common wisdom suffices for that. However, this should not conceal the deep significance names and the act of naming have for the human being, as a popular paraphrase from [Confucius, chapter 13] acknowledges: "The beginning of wisdom is to call things by their proper name."

By the act of naming, we carry the named thing over from an ineffable realm into the realm of language and linguistic behaviour. Thus, we start conversing with the thing and that brings us a kind of power over the thing. A footprint of such power is the persistent and colourful theme in cultural history across religions, geographies and societies of the belief that a dominance or a creation begins with knowing and reciting names (just recall the magical word “abracadabra”). Moreover, we not only stand in an almost instinctive need to name, but also to be named – imagine for a moment yourself as nameless.

Beside functional aspects, naming enables us to articulate a discourse around a thing, to internalise it, attaching associations, finding out connections. Hence, the name serves as an epistemic substratum. A name is, so to say, a peg to hang an identity on the named thing. We may discern this aspect of naming clearly in mathematics, where the importance of notation cannot be overstated and naming has a central role in forming notation.

Consider we are trying to work out a solution for a geometrical involving a triangle. We draw the figure and concentrate on it. Standing by itself unnamed, it is beyond our control of reasoning. It is, as it were, on the limbo of existence as a mathematical object, hanging over there: 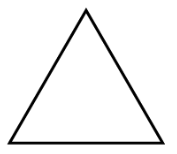 Now, label the edges and vertices of this triangle and take a look at it again and consider the determinative difference: 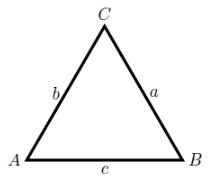 This step is not merely a matter of functional convenience, it is the power of naming. The following observation from a colleague of the eminent mathematician Alexandre Grothendieck, who was one of those explicitly deliberating over naming, is quite illuminating:

[Grothendieck] was a master at naming, and he used that ability as one of his main intellectual strategies. He had a particular talent for naming things before possessing and conquering them, and many of his terminological choices are quite remarkable. . .

His strategy, then, was to name. That is where I took the title of this article: "A country of which nothing is known but the name", because that was truly his way of going about things. ([Cartier, p. 289] emphasis in the original)

Hence, descriptive or not, sooner or later, we have to attribute, to use Frege’s term, an Eigenname in order to further our knowledge. It is worth taking into account in the present context that by ‘Eigenname’ (translated in philosophical texts as ‘proper name’ which is its usual English equivalent, but notice that ‘Eigen’, a cognate of English ‘own’, is a peculiar word, thus left untranslated in some technical cases as eigenvector, eigenvalue and eigenvariable), Frege actually signifies a logical name rather than a grammatical name, a close analogy being the logical/physical name difference in computer science.

Surely, we may cite other interesting ramifications here (Wittgenstein's connection between meaning and use is only one of them). However, the foregoing remarks are intended not to lay out a thorough consideration of the intrinsic relation names bear to knowledge, but to suggest a subsequent course of discussion. As Friedman bluntly puts it, “in the world of ideas, to name something is to own it. If you can name an issue, you can own the issue.”

Cartier, Pierre. "A Country of Which Nothing is Known but the Name: Grothendieck and "Motives"" in Alexandre Grothendieck: A Mathematical Portrait edited by Leila Schneps (International Press of Boston, Sommerville, 2014).

Not the answer you're looking for? Browse other questions tagged philosophy-of-science philosophy-of-language or ask your own question.

9
Is the justificationist theory of meaning compatible with scientific realism?
0
What is the essential something that Heidegger suggests that philosophers can learn from poetry?
4
How does Kripke lay out the epistemic argument?
6
Frege's Argument About the Sense and Reference of a Sentence
9
What is the name behind the concept of believing in God based on this logical deduction?
2
What is the name of the view that nothing is true?
0
Textbook on the theory of definitions
0
What is the name of the idea that knowledge is dependent on past experience?
3
Is there any theory which formalises the “facts” of a scientific field?