What is the difference between infinity and endlessness?

Rudy Rucker, author of the book Infinity and the Mind, writes this:

To understand how something can be endless but not infinite, think of a circle. A fly can walk around and around the rim of a glass without ever coming to a barrier or stopping point, but none the less he will soon retrace his steps.

Endlessness is, after all, a principal component of one’s concept of infinity. Other notions associated with infinity are indefiniteness and inconceivability.

(Disclaimer: None of the figures belongs to me; their sources are cited below)

Intensive exploration of infinity over the centuries has revealed that the notion should be decomposed into types and orders to be grasped adequately. In order to mark distinctions, we employ a cluster of words linked to infinity, some of which are often taken as interchangeable in colloquial speech. We associate these words with formal and informal models to make their senses more precise. As in many philosophical cases involving mathematics, it provides considerable convenience to appeal first to mathematical descriptions as central conceptions, and then, extend them to various areas of philosophy and science. So, let us consider an example, the mathematical induction in Peano arithmetic, from [Jeffrey 2006] (pp. 134-135) to have an idea about the significance of models.

We have the axioms A1, A2 and the induction axiom schema Ind, where 's' is the successor operation and 'P' is any property attributable to natural numbers:

It is instructive to check that the four graphs in figure 9.1 satisfy Ind, while the axioms fail in one or two of them:

We may also check that figure 9.2 fails to satisfy Ind:

As the foregoing example illustrates, talking about infinity without well-formed models can easily mislead us. The mathematician Richard Dedekind proposed to define an infinite set as one that could be put in one-to-one correspondence with a proper subset of it. We may generalise this idea, albeit possibly informal, as a criterion to extra-mathematical contexts. For instance, we say that X is infinite in a specified way if we can decompose it into disjoint parts at least one of which X cannot overrun, or, X is infinite if it does not get smaller when a finite part is taken out and the like.

Keeping these considerations in mind, we can turn to the distinction between being infinite and being endless. Let us review the following diagrams from [Rucker 2005] (p. 16): 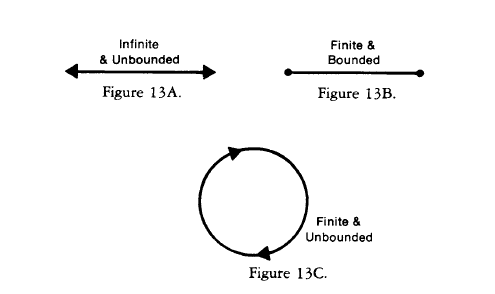 The line in figure 13A has no endpoints (i.e., endless), hence unbounded and its length is infinite. Take any part reflecting the same property of having no endpoints, it is again of infinite length.

The line of figure 13B is bounded by the endpoints in both directions and its length is finite (beware: not the number of points comprising the line).

The circle in figure 13C is of finite length while it is unbounded: It has no endpoints (endless), for there is no property to single out one point as an endpoint among others. From the viewpoint of the fly, there is nothing in its path that differentiates a spot of it, and ideally, it could fly straight ahead (cyclically) forever. To be endless is a necessary condition to be infinite, but not a sufficient condition. By the same token, I would see ouroboros as a symbol of endlessness. Indeed for gnostics, ouroboros symbolised an eternal cycle of dying out and rebirth, the eternal unity never ceasing to exist, but ceaselessly changing form.

As for the fractals, let us consider Koch snowflake (closed Koch curve) as a representative figure. Koch snowflake is an example of a geometrical figure that confines a finite (bounded above) area, yet has an infinite perimeter (preserving its Hausdorff dimension at the limit). Hence, a figure may be finite in one respect and infinite in another. However, it is worth an emphasis that each fractal figure requires analysis to clarify its geometrical properties.

As the snowflake is a closed curve, it might be interesting to compare an ant tracing the curve with the fly tracing a circle. While the fly would experience an endless path, the ant would experience an infinite number of vertices, thus an infinite length, though its path would be constructed by repeating a pattern enclosing a finite area. 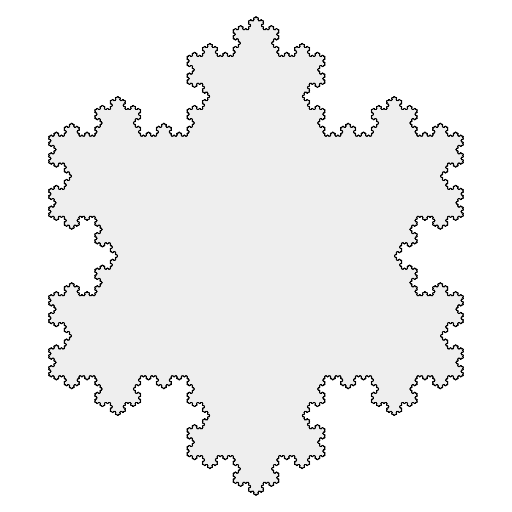 The term "infinite loop" is not a contradictio in terminis, the question is what is that is infinite: the length of the loop? the number (or duration) of endless iterations to to trace it? or something else? As a term of computer science, it denotes a finite number of instructions with no functional exit, hence, liable to indefinite (viz., would be infinite) number of iterations bounded only by computational resources.

As a final remark, I would recommend to use the terms in compatibility with mathematical terminology. An illustrative cluster I can cite is the one depicted in the following diagram (i.e., lower bound/upper bound, minimum/maximum, infimum/supremum): 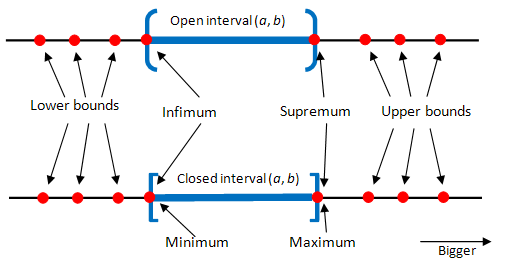 Rucker, Rudy (2005). Infinity and the Mind: The Science and Philosophy of the Infinite 3rd edition. Princeton, NJ: Princeton University Press.

Something like a circle or the entire plane is specifically called boundaryless because it does not have an edge (unlike a unit interval, or the upper half plane, which do).

Not the answer you're looking for? Browse other questions tagged philosophy-of-mathematics infinity or ask your own question.