Recently, I was thinking about some rather interesting generalizations of the trolley problem to tracks containing an infinite number of people, and I was wondering how to formulate a moral argument around these problems.

The general setup is this: Suppose you have a trolley that is traveling down a track at a finite speed, and suppose there is an upcoming fork between one of two branches. Suppose each of the branches is a one-dimensional topological space with a person at each of several points. 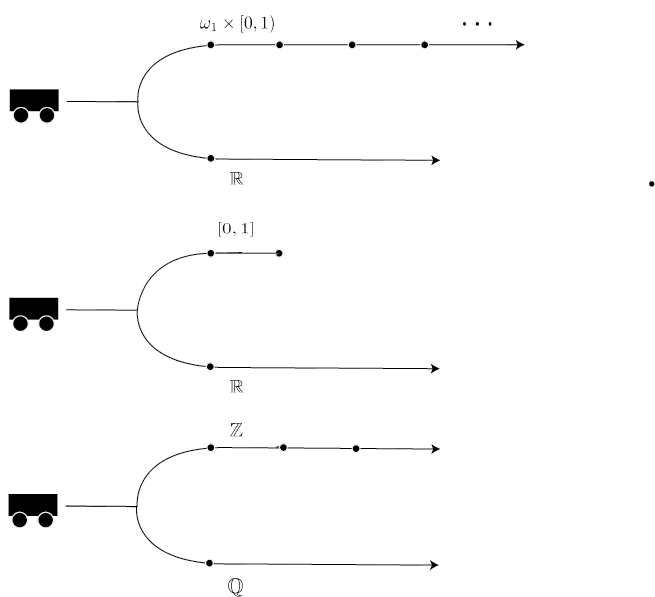 Branch 1: A long line with exactly one person in every subinterval [0, 1).

Branch 2: The real line with a person at every real number.

Branch 2: The real line with a person at every real number.

Branch 1: A person at every integer.

Branch 2: A person at every rational number.

All of these scenarios have the same cardinality of people on each branch, so at first glance, it seems like it doesn't matter to which track you divert the trolley.

However, I soon came up with some arguments for each side. For instance, in Scenario 2, there are arguments for diverting to both Branch 1 and Branch 2:

In addition, it feels intuitively clear that in Scenario 3, killing a person at every rational is worse than just killing a person at every integer, since you kill an infinite number of people in any finite time on the rationals. However, the cardinalities of the rationals and the integers are the same, which seems to contradict this moral intuition. For the first scenario, the issue is similar: Is a killing people in a continuous uncountable set morally worse than killing people in a discrete uncountable set?

The question is this: is there a moral framework for dealing with these infinite trolley problems? I am also interested in the case where the trolley moves at an infinitesimal speed.

Edit: To be completely rigorous, we need to assume the continuum hypothesis for Scenario 1 to ensure that the cardinalities of the number of people on each branch are the same.

I love this question. Is it philosophy less than mathematics, or equal to it here? I don't know for sure. The Stanford Encyclopedia of Philosophy article on infinity has a subsection on something called "God's lottery", for example. At worst, your reasoning illustrates the inadequacy of the utility aggregation scheme generally, maybe. Not a bad logical trade-off by any means.

That being said, re: the constructed scenarios... You know, I actually just read a blog post or something by a Christian writer trying to argue that at any given time, a sinner in Hell will only have been in Hell for a finite amount of time, so God ought not be accused of ever inflicting an actually infinite punishment on a finite creature. I'm not going to add to or subtract from that argument; I just mean to show that it is not an immediately clear thing for us, to say what effect variations on the infinitary descriptive parameters has for our understanding of the moral of this abstract story. In other words, if the cardinal disvalue of two actions is equal even unto some level of infinity, yet they "ordinally" differ in an important way nevertheless, would this allow us to decide whether to choose one of the options instead of the other? If so, then at least we would conclude: so aggregating cardinal value is not the only operation in moral algebra. Another legitimate argument, it turns out.

EDIT: indeed, this exact issue of one cardinal corresponding to multiple ordinals, does not arise among the finite numbers. Only by showcasing the abstract structure of the situation on the level of infinity can one best represent a case where we could use an ordinal judgment to solve an equation in deontic algebra as such. For example, you could just pick the taller ordinal at stake.

Not the answer you're looking for? Browse other questions tagged ethics philosophy-of-mathematics or ask your own question.

2
What are the useful outcomes of denying the Continuum Hypothesis?
1
Is the real number line actually real when we construct it?
1
Factors of a Utilitarian Calculation
4
Is the number of universes finite, countably infinite or uncountably infinite (and what size of uncountable if so)?
3
Generalizing mathematical concepts
3
Is there a non-arbitrary way to choose rules in rule utilitarianism
0
What created the bias in humans that make us intuitively claim the refutation of the Continuum Hypothesis?
0
What are the logical problems of solving the trolley problem with chance?