What did Godel mean by intensional paradoxes?

I have read recently a chapter in Hao Wang: A logical journey: From Godel to Philosophy , where Wang mentions his discussions with Godel on intensional paradoxes, but I have no clue what exactly they mean by intensional paradoxes and what is their importance and how do they relate to concept of concept and concept of absolute proof and why would one get a clear proof that mind is not a machine. --> 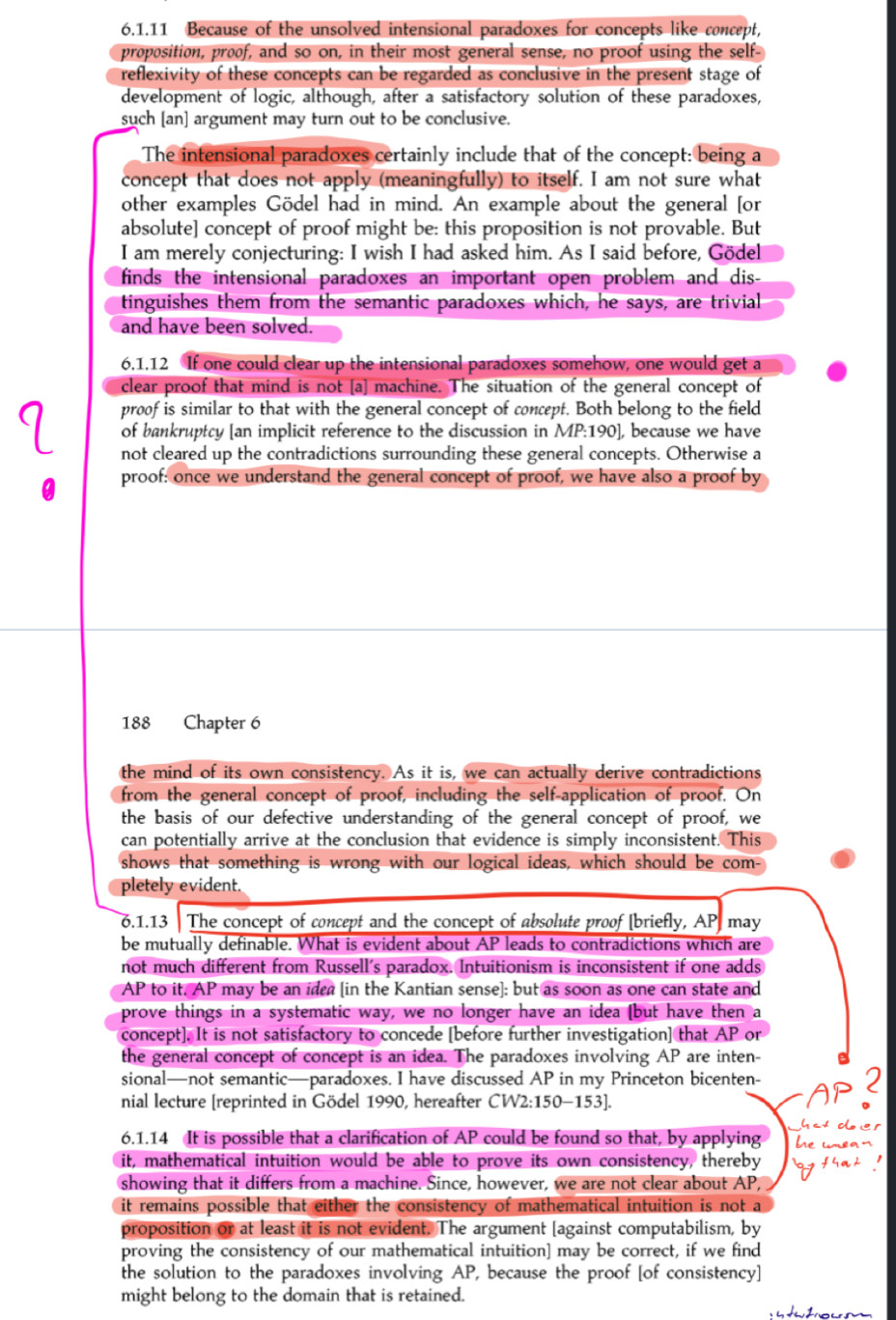 Gödel was keen to distinguish the intensional from the extensional. According to his account, the intensional is concerned with concepts, which are independent of their expression in any particular language. Concepts are distinct from classes, which are extensional. Concepts do not presuppose any particular domain of application. Gödel even suggests that this difference lies at the heart of distinguishing logic from mathematics:

The subject matter of logic is intensions (concepts); that of mathematics is extensions (sets). (Wang, p. 274)

For Gödel, paradoxes are a sign of having a defective or incomplete understanding of the notions of concept or class. While we can deal with extensional paradoxes, like Russell's paradox, by maintaining that a class may not belong to itself, this is not an option with concepts, since concepts can apply to themselves. For example, Wang (section 8.6.3) quotes Gödel as follows:

Gödel also distinguishes intensional paradoxes from semantic paradoxes, which are those that arise from the use of a particular language. Gödel proposes to dispense with the liar paradox as a semantic paradox. We can ask the question whether the sentence “This sentence is not true” is true or not. However, the property ‘true in language L’ cannot itself be a predicate of L, so the paradox is resolved. By contrast, conceptual paradoxes can be formulated without reference to language at all. (Wang, section 8.5.10).

Gödel, as a platonist, thought that concepts are real things that exist independently of us, so the intensional paradoxes are a substantial problem standing in the way of our having a proper understanding of concepts. Gödel seems to suppose that if only we could clear up all of these paradoxes, we would be left with a perfectly clear understanding of how concepts work, including the logical concept of proof, and this would somehow show that the mind is not a machine. Exactly what he had in mind is not clear (to me, at least). Perhaps he considered that computation is purely extensional in nature, and therefore if we could acquire a perfect understanding of concepts, it would show that our intuitions transcend what is computable. Others, famously J. R. Lucas, have tried to defend the thesis that minds are not machines on this basis, but the claim is widely thought to be dubious.

Intensional, as used here, is synonymous with self-referential, nothing more. For instance, Russell's paradox. Or, for that matter, any other paradox, or contradiction arising due to self-reference.

Not the answer you're looking for? Browse other questions tagged logic philosophy-of-logic or ask your own question.

1
Can political ideologies be logically undecidable? If so, what are the consequences of this?
7
How does Kant derive the categories of the understanding from the logical forms of judgment in the Critique of Pure Reason?
1
Doubt in Searle's Mind: A Brief Introduction
8
Gödel's incompleteness theorems - what are the religious implications?
7
How do proofs about logic fit into a logical framework?
1
What is the literal meaning of "The only thing that I know is that I know nothing"? (Is not knowing anything a knowledge?)
2
Can we define the notion of an "omnipotent God" in terms of computational power?
2
Fail to understand Tarski's substitution argument for logic apriorism and a rebuttal against it
0
In the context of philosophical logic, what does 'extra-logical' mean?