I was having a discussion with a friend after one too many Gin and Tonics about UK drugs policy.

I recently read "Drugs - Without the Hot Air: Minimising the Harms of Legal and Illegal Drugs" by Professor David Nutt, who was famously sacked by the UK government after claiming that horse riding is more dangerous than taking ecstasy.

Anyway, I was paraphrasing from what I'd read in this book and our conversation went something like this:

Me: "UK drugs policy is not evidence based and according to the evidence we should do X rather than Y."
Him: "What evidence?"
Me: "The evidence about the harms of drugs."
Him: "Yes what evidence is that?"

This carried on for a while until I finally said:

Me: "Well, I don't know the original papers and haven't read them but the guy who wrote the book knows the evidence and these are his recommendations."

His final response was, "Well then", implying that because I didn't know the original research literature my argument was invalid.

What logical fallacy has he committed here? I understand I am almost committing the appeal to authority fallacy but at some point a scientific consensus builds based on the available evidence and those of us who are non-experts need to trust someone to synthesise and present that evidence accurately, which is what I've done. I've taken a look at the following image and similar sites but nothing seems to fit the bill. 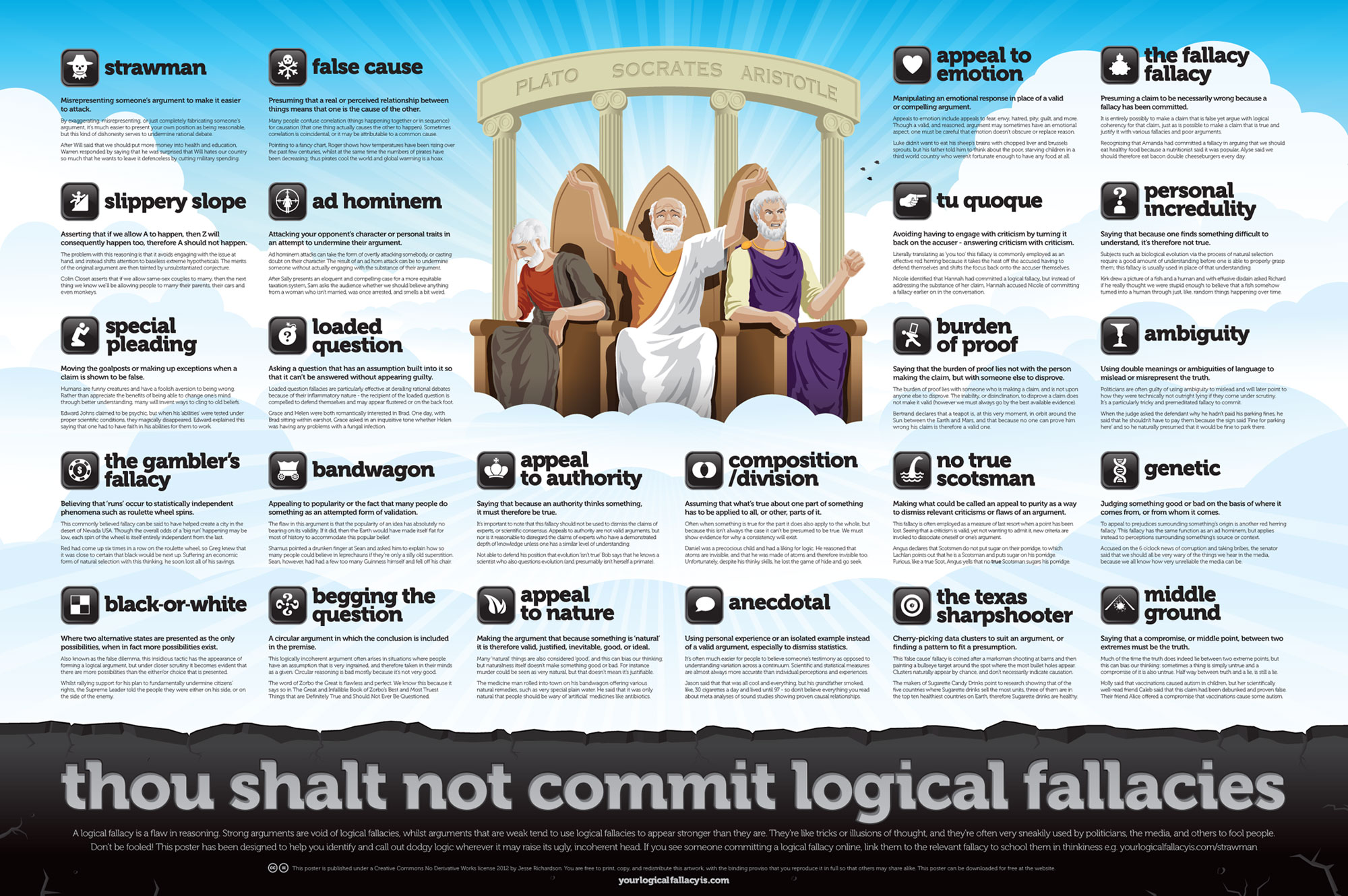 In your case, you're assuming that he is committing a fallacy by asking for the original research about the harmful effects of drugs. I'm not really sure I could defend your argument, as is. Then again, you just had a casual discussion mixed with alcohol, not exactly the hall of reason. Think of logical arguments as the sort of thing you would prepare yourself with thoroughly if you were about to make your case to a rational judge. You should ask yourself if the rational judge would want to see the original research.

I doubt the rational judge would need the original research, but he would need more than just a vague sense that you heard that drugs are bad for you. The website Logically Fallacious has a page about the appeal to authority, but with an important exception:

Exception: Appealing to authority is valid when the authority is actually a legitimate (debatable) authority on the facts of the argument.

So the argument could be debated, not necessarily on the original research as if you were both experts on the matter, but on the credibility of authorities that you are citing. In your case, you would both need to know something about the author of the book you read, and whether he should be considered a reliable source. Are there other experts who disagree with him?

A better form of not committing an appeal to authority fallacy is to appeal to consensus of experts in a particular field.

In scientific journals, there are usually review-papers, which collect a summary of peer-reviewed articles into one single list, to analyse and update claims about X. So if you want to tell reliably that alcohol has an overall negative health effect, you should probably relate to some review papers, which collects, categorizes and summarizes all other findings in that subject.

A single paper claiming that alcohol increases the risk of e.g. Alzheimer disease is possibly true, but insufficient to claim that the alcohol is bad.

So appeal to an authority, even if she/he is a real authority is a weak justification, doesn't mean the claim is false, but there is insufficient body of evidence to come to a particular conclusion.

Better is to refer to a consensus of experts (possibly scientists and/or authorities) in a particular claim, which is possibly the strongest justification inductive knowledge can be.

Not remembering the source (e.g. the journal, author, the date and the title) of a particular paper is definitely not a fallacy. If you have cited or read it exists, you can always look up the reference after the debate. If the opponent accuses you not knowing X is irrelevant of the topic and is not an evidence that his position is true, either as ad ignorantiam, the argument from ignorance or ad hominem, addressing you as a person but not the argument itself.

9
Introductory book on philosophy of logic?
1
What is the fallacy that privileges one person over another?
3
Is there a logical fallacy to describe the complete dismissal of the value of scientific consensus?
3
Slippery slope fallacy, clarification on its correct use
2
What is, and isn't the appeal to emotion logical fallacy?
6
On the determination of scientific consensus
1
He hasn't found the false positive yet, but he is committing a logical fallacy. What is the fallacy?
4
Presenting an example, then claiming the other person needs more information before using the same example - is either of us making a fallacy?
2
Why does a hypothesis not self-defeat under fallacy of the gaps?
0
Quote from Kant about science