I am trying to prove that the sets {7,8,9} and {7,8,10} are different sets, using only the two basic axioms in naive set theory (Axiom of Comprehension and Axiom of Extensionality), and first-order logic.

Informally, it seems trivial to prove.

Here is my formal attempt: 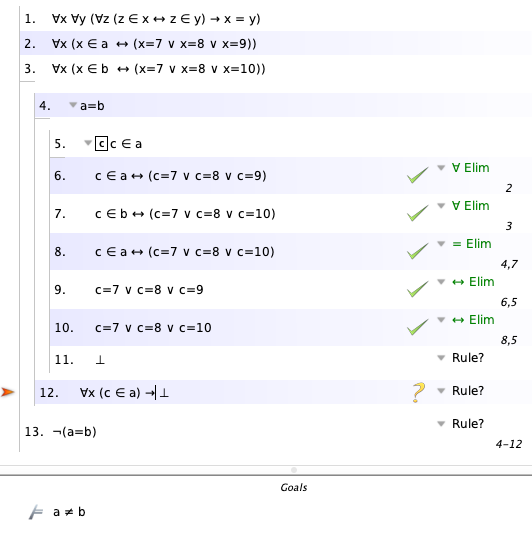 The green arrows represent rows that are tautologically valid steps in the proof. As you can see, starting on step 11, I have written the steps but I haven't specified a rule and so those rows don't check out. Additionally, I don't believe the proof is correct starting on step 11, though I believe the general idea of the last few steps is correct.

- I'd like to know how to complete this proof. It doesn't matter if you provide the steps, or just an outline of the steps that would be required. Conceptually, I am trying to understand what it is at the very fundamental level that makes a proof of such a simple result possible.

I believe some predicates taken as axioms are necessary to complete this proof. In particular, I don't think we can prove that steps 9 and 10 aren't compatible in this proof without recourse to extra axioms about numbers.

Axioms for numbers are not necessary; we can re-phrase the problem considering A = { a,b,c } and B= { a,b,d } and nothing will change.

The second move, in order to "measure" how much set-theoretic commitment is needed, is to avoid the "belongs to" relation: ∈, and use a more "neutral" binary predicate R(x,y).

We can easily prove, using the Substitution axiom for equality that:

As suggested by @TenO'Four's comment above, this "fact" is not provable by logic alone, because a model of the above formula needs at least two objects and thus the formula is not valid, i.e. it is not true in every model.

Having convinced ourselves that we cannot prove ¬({ a,b,c } = { a,b,d }) by logic alone, we can try to understand where set theory "creeps in", and the answer is: in the use of the set-builder notation (or: abstraction operator)): { x | phi(x) }.

This operator, that transform a formula with one free variable into a term (a "name"), is not part of first order language.

It must be added to the first order language of set theory with the following definitional extension:

Finally, to exploit the above considerations in terms of naive set theory, we need a "minimal" model with at least two different sets: we can use ∅ and { ∅ }.

2
Why is this set {CqCpq, CCpCqrCCpqCpr, CCNpNqCqp} the most common set of axioms for propositional calculus?
32
Is First Order Logic (FOL) the only fundamental logic?
2
Are there foundational theories of mathematics without constants?
5
Is there something in syllogism that is not covered by set theory?
3
How can certain predicates be proven to not have sets as their extension?
1
How to write a formal proof of Euclid's Theorem, specifying every logic rule used?
0
How to write that two specific sets are the same set in first-order naive set theory?