What did Russell intend to achieve with "The Impact of Science on Society"?

I have been reading Russell's "The Impact of Science on Society" and I found it to be a very strange book. This book has become like a Bible to some conspiracy theorists, and I can see why. However, I find it hard to see just what Russell actually meant. I am quite confused by this book, because Russell often intertwines his fears and his hopes.

On Wikipedia, I find the following:

Russell argued for a "scientific society", where war would be abolished, the growth of population limited, and prosperity shared. He suggested the establishment of a "single supreme world government" able to enforce peace, claiming that "the only thing that will redeem mankind is co-operation".

My current reading of the book is similar and as follows:

It is this last option that Russell seems to argue for, in my opinion. He mentions vaccinations, mass indoctrination, sterilisation as part of what he does not want to happen. It's as if he is saying that a scientific society is inevitable, and that we have a choice between either a totalitarian and/or oligarchic scientific society (A) and a democratic scientific society (B). Since A or B is necessary and A is worse than B, he argues for B by outlining everything that is wrong with A.

Am I correct in my reading? Was Russell's intention to warn us against the uncontrolled power of scientific technique and to argue for a system which would give us happiness and do away with war or was his intention to 'outline a plan for the elite', as the conspiracy theorists would call it. I have tried to find secondary sources, but apart from conspiracy theory websites, there are none.

Having read the book thrice (it's short and quite well-written), I think I can confidently answer my own question now. I was correct in my reading, but I will expand a little further on the matter for those who are interested, especially since there are no good secondary references to be found on the internet. Let's hope StackExchange is better at SEO than conspiracy theory websites. ;)

I think it's important to keep a couple of things in mind whilst reading Russell's later work in general and his Impact of Science on Society in particular:

-The book was transcribed from lectures Russell delivered in 1923 so the next point might be reconsidered, in my humble opinion. Adapted as explained in the Below linked .PDF 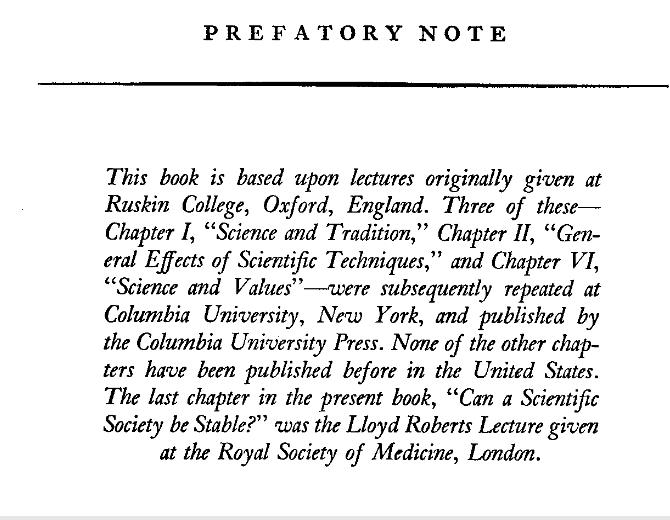 PREFATORY NOTE [see above] "This book is based upon lectures originally given at Ruskin College, Oxford, England."

► always respect the original author: I intend to, please forgive my correction, it is totally in seeking of good Philosophical discussions.

All of the above explains why you may read some things that may at first sight seem scary.

His story starts by telling how science is a fairly new human activity and how science, or more accurately technology, may change the world and is changing the world. Some of these changes are obvious to those who know a little bit about history and history of science. Less superstition, observation rather than authority as a way of determining truth. This may seem obvious to us nowadays, but he mentions how Aristotle claims that men have more teeth than women, but never cared to actually look at his wife's mouth, despite being married multiple times, just like no one cared to actually look at human bodies to find out more about them before Vesalius. Before that, Galenus was truth, even though anyone who cared to make trivial observations could find out that Galenus' theories were simply wrong.

More importantly for the rest of the story, he goes on to talk about how science has brought us technology and how that technology has changed the way politics work. Three inventions in particular have changed the political framework:

We end up with a situation in which a central state can have a lot of control over its territory and there are virtually no limits on size or pervasiveness. If this kind of power and control ends up in the hands of a few who want to gain control over the rest of us, it is clear that life can become miserable for the many. It is in this chapter (3) that Russell describes what would happen and it is in this chapter that many of the conspiracy theory quotes can be found. This chapter is in fact a criticism of the Soviet Union as much as it is a critique of oligarchy in general.

What he does say, and the conspiracy theorists are right about this (though not necessarily about the intentions behind it), is that he argues for a "one world government".

The purpose is to avoid the horrors of scientific technique falling into the hands of the few and:

I will expand this answer a bit more later.

the most important chapter I felt was what a scientific oligarchy would be like. Bertrand Russell understood implicitly that ALL western societies are oligarchies masquerading as democracies. Huxley also spoke about this fact. make no mistake, the crazy folk are right about this man. in his book The Scientific Outlook he espouses both the ideas that population could be controlled by letting loose man made plagues in every generation and convincing men to kill themselves in some kind of sport for which they would receive great honour. he also so alludes to the need for men to be feminised more so that they wont cause unrest in their new world, which would go some way to explaining the rise of the Estrogenic Male

Russell argued for a "scientific society"

Science at the beginning of the 20th C was still a gentlemanly pursuit. Now it is heavily professionalised and employs - directly and indirectly - many tens of millions of people. More importantly, a scientific society is akin to a rationally run society and this is the essential principle that forms the background to Enlightment notions of a flourishing society.

For example, secularism in Western societies was a rationally introduced principle that arbitrated between various religious denominations by being a common neutral point. (This will probably require renegotiation in the future given the remarkable growth of athiesm over the 20th C as secularism allies itself more naturally with the athiestic view by the very virtue of its neutrality).

where war would be abolished

War before the 20th C was naturally limited by virtue of the actual technology available to contending parties and nations. War had its casualties but the number of casualties were limited. But given the immense increase in the power and the reach of military technology then it makes sense to call for the abolishing of war. This is not a consequence of a scientific society per se, but again a society run on the principles of reason and flourishing.

the growth of population limited

Worries about a demographic explosion were a common worry at the beginning of the 20th C with a corresponding increase in the interest in eugenics with tragic consequences such as forced sterilisation in Indira Gandhi's India and the holocaust in Western Europe under the instigation and leadership of Nazi-run Germany of Jews, the Roma and the mentally ill and physically disabled.

However food production under scientific principles was hugely increased. The problem then became that of effective distribution.

In the aftermath of the Second World War social democracy in Western Europe was an effective mechanism of equitably distributing the goods produced by society. Starting in the eighties the neoliberal revolution inverted this and inequality began to build up again where now out of the top one hundred economies in the world, sixty nine of them are corporations. Inequality is recognised as huge global problem. There are useful suggestions to rectify this, for example, Stiglitz has suggested a minimum of 20% corporation tax to be globally enforced which avoids their arbitraging of taxation jurisdictions by transnationals, or the Tobin tax on financial transactions.

This was urged by Roosevelt and which led to the creation of the League of Nations which did not work well and was short-lived; a second attempt resulted in the creation of the UN; globally, there is a whole ecology of such global institutions. Others include the WTO, the World Bank and many NGOs such as Amnesty International or the Red Cross.

This is a very old idea, rather than a new idea; it has always been cooperation that redeemed mankind from its atavasitic and competitive instincts, which in its bare form leads to war; and in this modern age, cyber warfare which takes two main forms - technological - for example actually hacking into networks - or psychological ie cyber-bullying and psychological manipulation.

Religion for example is derived etymologically from a Latino word meaning 'come together' and which is reflected in the notion of the congregation or mass in Christianity, or jumma in Islam which has the same connotation as congregation.

I haven't read this particular book by Russell so I can't comment on your final question; however, Hannah Arendt in her book, The Human Condition does cover similar grounds where she observed drily that scientists did not refuse to develop atomic weaponry but having done so were surprised 'that they were the last to be consulted in their use.'

This points out that the power released by scientific technique in society remains in the hands of those who wield power - aka the establishment in all it's various forms, national and internationally - and not exclusively that of the scientific establishment, though of course they have some relation to political power, both legislative, executive and judicial.

Not the answer you're looking for? Browse other questions tagged philosophy-of-science society bertrand-russell or ask your own question.

9
What were some of Russell's arguments against Kant's system of thought?
4
Where did Bertrand Russell describe the circumstances which keep the impulse alive?
2
In what writings did Bertrand Russell criticize the epistemology of Rene Descartes?
1
How Russell and Ramsey misunderstood Wittgenstein with regard to the problem of the perfection of language?
4
What did Wittgenstein (mean to) achieve in the Tractatus?
2
What are the reasons for taboos in a society?
5
What's the difference between the "hermeneutics of suspicion" and conspiracy theory?
3
What are the premises for "On Induction" (Russell)?
1
What did Bertrand Russell mean: 'Ethics is in origin the art of recommending to others the sacrifices required for cooperation with oneself'?