Question: Should one prefer to use a quantum RNG over a classical RNG to decide on the travel route, given that some of the routes may be deadly? 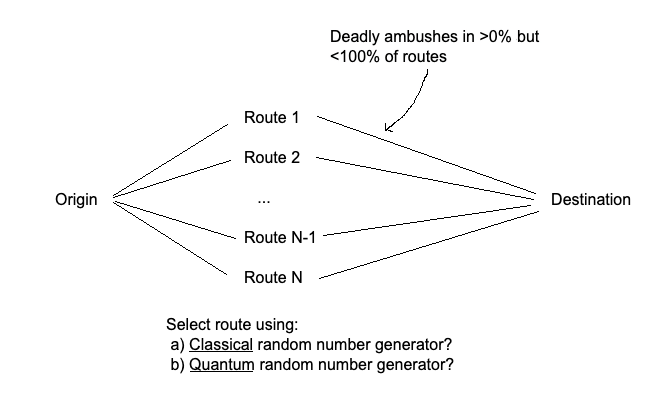 free-will probability quantum-physics quantum-interpretations uncertainty
Share
Improve this question
edited May 15 at 11:52
Justas
asked May 14 at 18:37

There is no difference.

All randomness is inherently quantum. The parameters of a coin toss are randomized by the probabilistic inaccuracy in the neural system and the muscles of the person tossing the coin.

Pseudorandomness might improve your odds of survival. As a pseudorandom selection of route is actually a deliberate choice, there is a non-zero possibility that you have some useful knowledge about the ambushes, that might affect your choice.

Not the answer you're looking for? Browse other questions tagged free-will probability quantum-physics quantum-interpretations uncertainty or ask your own question.