Is there a term that means "soft validity?"

By comparison the premise "five people who weren't at the scene think he was probably there" does not support the conclusion, and the argument isn't even softly valid. If five witnesses who were there were sure the suspect wasn't there, that could be called "softly contradictory."

The reason I ask is I am teaching a class I call Argument & Logic in which we analyze arguments and consider fallacies. When I state an argument doesn't have a fallacy and the premises do support the conclusion (but that it doesn't actually entail), I want to say it's a "valid argument" but that's technically incorrect. However the term is used that way in day to day conversation.

You are right to observe that the term valid in logic differs from its popular use. An argument in which the premises support the conclusion but do not entail it might be called strong or cogent. Some texts treat these as technical terms in their own right.

We might indicate the precise sense of valid as used within logic by qualifying it as deductively valid. But this does not imply that there is such a thing as inductive validity. In some cases we may be able to say that the premises make the conclusion probable, though in general such claims are problematic, because the probability of the conclusion will depend on all kinds of assumptions and unknowns. Confirmation theory attempts to account for the way in which premises, evidence or data support a conclusion.

Since validity has a well-defined, precise meaning already, why not instead use the examples you mention as opportunities to point out that there are other kinds of useful reasoning besides deductive reasoning.

For example, the example scenario you gave sounds like it involves abductive reasoning. What best explains five, independent people all saying they saw the same suspect at the scene of the crime? Well, it could be, as you said, that all five were deluded; or maybe that what they saw was a holographic projection. But it seems the most plausible, straightforward, and parsimonious explanation is that the five people saw what they thought they saw. You could point out this is the sort of reasoning often used in courts of law.

And in the second case you gave, I think it'd be fair to simply point out that it's just a poor argument, as there's no sort of good reasoning principles that would allow us to go from the fact that five, independent people who weren't anywhere near the scene of a crime think a certian suspect was there, to the conclusion that a certian suspect was probably at the scene of a crime.

Deduction is the certainty of inference from premises from conclusion. Valid means an argument's form is certain. Invalid means it's not. However, since induction is a form of inference, and this inference is probabilistic instead of certain, then an argument with a form can be weak, strong, extremely strong, etc. From WP's Informal logic: 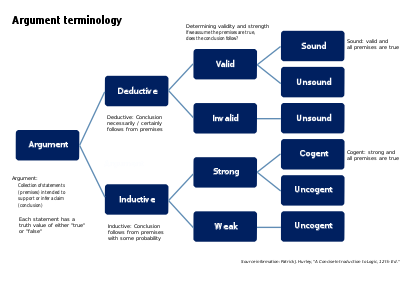 Thus, instead of an attribute being a mutually exclusive combo of valid-invalid, we have a continuum of gradation available.

So, to your example:

In our legalistic, informal argument, the testimony of a single percipient witness to buttress our argument is extremely weak. If five witnesses testify, that is stronger, but to have 1,000 witnesses testify to an event, we have an extremely strong probability of having a warrant that justifies our conclusion. If you want a great philosophical model of informal argumentation The Uses of Argument by Toulmin is a great start.

Not the answer you're looking for? Browse other questions tagged logic argumentation philosophy-of-logic induction validity or ask your own question.

4
What is the logical form of the definition of validity?
2
soundness: how can one decide\know if premise is true or false
1
For arguments, besides validity and soundness, what of Potential Convincingness?
1
The validity of the definition of a valid argument
5
How can a false premise still produce a Strong Inductive Argument?
6
What is the nature of "validity" in deduction when dealing with conclusions unrelated to premises?
3
Is "(1) All humans are mortal. (2) Socrates is mortal. Conclusion: Socrates is human." unsound argument?
1
can an argument containing a contradiction be valid argument
1
Question of Validity in syllogisms of deductive argument
0
If this world is the only possible world, what does that mean for validity in logical arguments?