Can the concept of the Trinity be logically supported as the belief in one God rather than three Gods?

Christianity has its roots in Judaism, as such some of the teachings in the Old Testament have carried into and are reaffirmed in the New Testament, one such being is the monotheistic belief in one God. When Jesus is asked which is the most important commandment he replies:

This is reminiscent of Deuteronomy 6:4 in the Old Testament:

Hear, O Israel: The LORD our God, the LORD is one.

Therefore in Christian theology God is declared to be one as in Judaism. However, due to the the myriad of descriptions of Jesus and his relation to God, early church Fathers trying to make sense of said descriptions therefore formulated the Athanasian Creed defining God as is revealed in the New Testament. If you want, you can read it in full in the attached link, but to paraphrase, it states that the one God is not one in the strictest sense, but is triune (what is known as the Trinity).

The concept of the Trinity is illustrated in this picture: 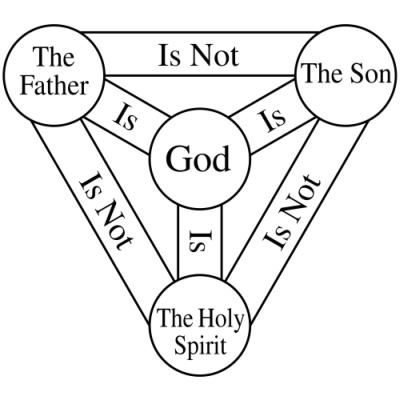 As such, you can pray to either the person of the Son, the Father, or the Holy Spirit and still be praying to the same "one God" in Trinitarian belief. To me, the idea of one God seems to be defied the moment you speak of a multiplicity of persons instead of one.

When I think of a monotheistic God, I think of one person of one substance, rather than 3 different persons of one substance. You and me are different, because what characterizes our distinction and separate us from one another is the independence of our minds. If we were both under the control of one mind, it could be said that we are still the same person. Likewise conjoined twins who belong to the same body are distinct persons because it is theirs mind, their consciousness and their ability to think that defines their distinction from one another. The moment you have more than one person involved it logically follows that you have more than one human involved.

As such, when you pray to 3 different recipient persons who are all God, are you really praying to one God instead of three Gods? Can the the Trinity be logically justified as the belief in one God?

A passage in the Church of England liturgy, which I have heard many times, says of the Trinity

This is implying that logic is quite the wrong tool to be applying to the mystery of the Divine. That is to say, whether the Trinity can be logically supported as monotheistic is neither here nor there.

Nevertheless I am minded of the Classical god Janus who had two faces, and of certain Hindu traditions which regard their many divinities as emanations of the one Brahma. It does not seem intrinsically illogical to regard the Trinity as three fundamental aspects or personas of the One God.

I will quote the Catechism of the Catholic Church:

The Trinity is a mystery of faith in the strict sense, one of the 'mysteries that are hidden in God, which can never be known unless they are revealed by God'.

It is part of the teaching that it can not be, in fact, "logically justified" to human minds.

Aquinas describes the persons as self-relations of the divine nature. If we waive the doctrine of divine simplicity, let's say that God has three properties that we'll call F, S, and H. Suppose that we can order the properties such that there is an ordered set F:S,H, another S:F,H, and lastly H:F,S. Each set is the whole divine nature, and there is only one instantiation of this nature by itself. So perhaps the ordering from F is the Father, etc.

Of course this depends on the level of composition we attribute to the divine nature, and our sense of orderings, and so on. There is a history of emphasizing certain correlations, e.g. we might pair the three persons with the theological virtues and say that love is ordered around the Spirit especially, or the Son is the foremost expressor of wisdom (in a different frame than the theological virtues); this is not to deny love and wisdom to the Father.

I personally find these answers sufficient for my faith but I would not dream of enforceable orthodoxy on such a basis.

As I type this, there are any number of different wildfires raging across the US Pacific states. They all have different designations — different names — and they all threaten different locales. But they are all essentially 'wildfire', more or less indistinguishable from each other. It would not be wrong for me to say: "The West coast is being devastated by wildfire." The plural is conventional, not essential.

The question of 'identity' has plagued philosophy since ancient times. We only need to think about the fable of the three blind men: one who thinks he's found an odd snake, another who thinks he's stumbled into a tree trunk, a third who's discovered a length of dangling rope, and none of them able to see the elephant in the room, whose trunk, leg, and tail they are all misinterpreting as separate objects. In this sense the trinity is merely a reflection of human blindness: we cannot understand the notion of 'God' in its proper form, so we latch onto aspects of it that we can understand and give them separate identities. Your argument effectively says that an elephant can't be a snake and a tree trunk and a length of rope. That's true enough, but it does kind of miss the point.

Please see this short, relevant YouTube video for context. Apologies that it's not exactly kosher...

When you say "logically supported," the answer is probably not, logic being a system of strict distinctions and exclusive identities braced up by such dichotomous principles as "law of the excluded middle."

But the real mystery of the Holy Trinity may be that it is considered so mysterious, when so much of philosophy and human thinking in general operates via triadic or dialectical structures, from Plato to Fichte and Hegel to Freud and Saussure, etc.

Even in our ordinary thinking we envision objects in "three dimensions," and a human being is always the "conception" of trinitarian relations, being literally two persons in one, within the mother, and assuming the nominal identity of the mother's opposite in the father. The three family identities are only physically separated out by a spacetime grid that presumably does not apply to God.

In the Bible, Jesus in "his own words" only hints at the idea that he was the "son of God," though the idea was stated more explicitly a century or so later by the Gospel writers. I believe Paul, closer in time to Jesus, introduced the "Spirit," which was already a Judaic life-force mentioned in Genesis, for example. The cultural milieux was Greco-Roman, in which there are many examples of mortal offspring of immortals.

By the time the Bible was more or less formalized, you had a complex patchwork of centuries of stories, etymologies, metaphors, and lost references. So the Church Fathers were left with the task of squaring the circles, with the most dire consequences for authoritative practice and the fate the soul. By expunging the heresies of Origin, the Church set itself up for problems when dealing with rationality in such matters as the relations of a "universal being" and a "particular" individual.

But the tripartite structure is, logic aside, widely viewed as irreducible for the description of any form of "self" or "self-consciousness" or dialogue or motion, including the "motions" of symbolization, communication and living reproduction. It is only logic that throws up a kind of hermeneutical problem here.

I take the roughly Boethian take on this as roughly correct: the Trinitarian statement (One God, Three Persons) may be logically analyzed, and made some sense of, in terms of a distinction of the types of questions raised; though the details of how does this work are deeply mysterious.

In a nutshell: if you ask "how many Gods are there", one thing (being, ousia) would raise its hand, so to speak; but if you ask "who is a God around here", then three persons (people, "lads") would raise their hands, so to speak. And if you were to ask "what is your name" to each "lad", you would get the answer "Father", "Son", "Gift".

Having said that, there is widespread consensus among Christians (Trinitarianists) in that this statement (one substance (ousia), three persons (prosopa)) should be regarded as strictly revealed, i.e. we wouldn't be aware of the Trinity of persons unless Jesus had hinted at it somehow; so, "philosophically speaking", i.e. from the viewpoint of our natural knowledge, we wouldn't be aware of this fine distinction at all: substance equals person, period. That's why there are so many Unitarian Christians around.

From its inception, the Christian Trinity has never defined or associated itself with three distinct deities. Sadly, there has been and is still, a great deal of confusion and misunderstanding regarding this matter.

The Trinity or Triadic God in the Christian faith, has Jesus Christ as its Central figure of deification and worship....there ARE NO ADDITIONAL Deities within the Trinity. If there were other Deities within the Christian Trinity, What are their names? Who are they? What functions, roles and purpose do each of them have? Typically, in the pagan tradition a God or Goddess had a primary function-(i.e. Zeus, the King of the Gods, Apollo, the Sun God, Athena, The Goddess of Wisdom, etc.). Such was not and is not the case regarding the Christian Trinity.

Questions have often been raised regarding the contradictory nature of Jesus being both God and the Son of God. In a physical, naturalistic context, it would be an impossibility. However, Christianity, is a religion with supernatural beliefs- (including the acknowledgement of Godly Omnipotence) and within that realm of the supernatural, such an impossibility is possible and for the Christians...it is believed to be the Truth.

One way to understand the Trinity is to imagine The Godly Spirit, named Jesus, who, 2000 years ago, dispatched the archangel Gabriel to miraculously impregnate Mary, who then gave birth and raised a human-like representative (or to use contemporary sounding language), an earthly clone of the Divine Jesus-(a self-reflection of God's image). 33 years later, Jesus, the son of God died, was resurrected 3 days later and ascended to Heaven-(as the Holy Spirit), in order to be reunited with his Divine Father....Jesus.

If you notice, there are no other deities who were ever mentioned in this description (or even depiction) of Jesus' supernatural and earthly sojourn. Again, The Christian Trinity, is One singular being, with three different and distinct representations which are aimed at bringing salvation, universal love, and reverence for The Spiritual...to the world.

That, is the Christian Trinity...."in a nutshell".

Not the answer you're looking for? Browse other questions tagged ontology theology christianity or ask your own question.

6
Kierkegaard and the Tripartite Theory of Man
5
What arguments are there for the existence of a personal God?
1
Are analogies logical arguments?
2
Worshiping Jesus and saints
7
The concept of eudaimonia
0
Are there any publications that attempt to give a formal ontological definition of the Christian Trinity?