A different kind of ideology somewhat between capitalism and communism

I was wondering in the past couple of days about an idea, and I'd like to know your opinion on it.

From a strictly moral point of view, the ideal communist society is pretty utopic.

Equality, equal wealth, equity, and so forth and so on.

And in a communist society, having more than others is difficult to achieve.

Why should I invest 1, 2, 5, 10, 50 years of my life to innovate, so that someone's life is easier, if I don't get anything in return, just perhaps a insignificant little bit more, that's split among everybody.

Now I came up with a different perspective on it:

What about we let people earn from their inventions, stores, shops, etc, but not let them pass it to the next generation in their family.

I mean for instance: Let Bill Gates become super rish from his Microsoft, and Jeff Bezos, from his Amazon, and Elon Musk from Tesla, SpaceX, etc, but don't let it be give to his children, but split within the society.

So your innovation helps you, during your life, so there's an incentive to make new stuff, new stores, new cars, etc, but force your children to do the same.

Of course there are some loop holes possible, but it's not the intend of this post to solve them, just wondering, what's your opinion on it?

Has anyone had this idea before?

This position on Inheritance sounds a lot like John Stewart Mill's stance, discussed in his Principles of Political Economy (link to a relevant chapter on property), which is a bit more nuanced than this but still relevant. I'm no expert on Mill, but it seems like this might be a good starting point!

The first observation, which seems important, is that in as much as any parent has a responsibility to care for their child, the right to inherit from the estate of a deceased parent is important in so much as it ensures that this responsibility is discharged appropriately. Consider - if a child's parents die while the child is still young, but the child is taken in by a supportive relative rather than taken into state protection, then surely the parents' estate should follow their child's care.

However, Mill's observation is that this is not the whole story of inheritance. For example, in families with "illegitimate" children, or even with simply an eldest son and multiple younger siblings, property is often distributed unevenly, with some receiving more and some receiving less in accordance with their position within the paternal structure. If it were simply a matter of meeting one's familial obligations, then surely this distribution would be disingenuous.

In modern economic structures, rather than older systems of clan or tribe, property belongs to individual people, and individuals dispose of their property in a manner in which they see fit. Jeremy Bentham observed that we would not assume that any random stranger should take on ownership of another individual's property upon their death over the wider State, and Mill notes that it is not a significant jump from this to a similar argument against either a very distant familial relation or even proximate family members having rights of inheritance.

So the question then is why do we think that children ought to inherit any more than is due from Paternity payments throughout the course of their childhood, and Mill's answer is that any more must be conceptualized as a gift from the parent, and thus subject to the same laws of taxation that would apply to any gift from one individual to another beyond that minimum that is deemed a discharge of one's parental responsibilities.

(Indeed, Mill goes a step further even than this and argues that a parent need not be compelled to meet these familial responsibilities to their children, should they wish to disinherit them. But I think the more salient aspect of his point is that the right of inheritance is not total, and children are fully entitled to their parents' estates at most only to the degree that is necessary for their education and establishment as mature members of society.)

This seems like an entirely reasonable position to take on inheritance taxation, and so the question now becomes about how the state involves itself in the general transfer of goods between individuals. Mill has a lot more to say on this, and someone with greater depth of knowledge than I might want to pick this up from there!

Capitalism is an economic system. Free-markets and market-liberalisation are part of an ideological stance, typically called liberalism.

Socialism is a model of shared ownership, which can include state ownership of key industries, or those where the market is not succeeding like utilities. It existed before Marx & Engels, eg in the Cooperative Movement, and many European countries have developed their own forms of socialism that have little or nothing explicitly to do with the work of Marx & Engels, eg the Nordic Model.

Communism, is an ideal of non-hierarchical ownership as the dominant mechanism of ownership and management; it has roots from before Marx & Engels (eg The Diggers, the Paris Commune) but they are considered defining foundational thinkers, and it is explicitly utopian (eg Engels' Socialism: Utopian and Scientific). Marx saw communism as a, fairly distant, end-point in the historical dialectic that required many steps like industrialisation, effective infrastructure, and strong institutions. Marxist-Leninism fudged these steps because Russia had not yet industrialised.

Dividing the world supposedly into two camps is purely a result of the cold war. In practice, almost all countries have a mix of state ownership and management, and markets. Discussed in detail here: Philosophers on alternatives to capitalism and communism The 'TLDR' for that is, we need evidence-based-policy-making, not ideology, or knee-jerk crisis-management from the edge of collapse.

100% inheritance tax has been widely discussed, eg The Guardian, Forbes, Adam Smith Inst, and The Economist covers the range of issues about double-taxation and wider tax reform for greater fairness. The UK got fairly close, peaking at 85% of inheritances in excess of £750,000 - this was the end of many poorly run estates and great houses, which largely got transferred to the National Trust in tax deals in that era.

One major issue is, the richer people and companies get, the better they get at tax avoidance - as indicated by Amazon basically having chosen to opt out of paying tax, almost unchallenged for more than a decade. A big part of the problem, is disproportionate political influence of the wealthy and big companies. Another dimension is, whether people think the government will spend their money better than they can. That puts the very wealthy and middle-class people largely into a coalition opposing higher inheritance taxes. I think this cartoon nicely sums it up: 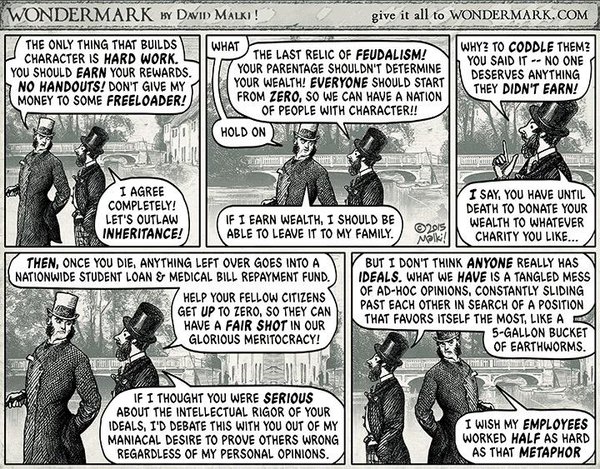 Economists largely agree with high inheritance taxes, as allowing markets to act efficiently in rewarding innovation and capital risk, rather than only birth - which unchecked could see us return to a kind of feudalism. In practice, worryingly few people seem to be voting and making policies to avoid a return to feudalism. Joseph Tainter's work The Collapse of Complex Civilisations points to that kind of rising inequality, in the face of crisees driven by ecosystem and resource depletion, as the main mechanism that has driven 'rapid simplification' of societies - or what history has referred to as, civilisational collapse.

It may be that "It is easier to imagine an end to the world than an end to capitalism." -Mark Fisher (also sometimes attributed to Slavoj Zizek).

It's interesting to look at the real basis of technological innovation. Charles Proteus Steinmetz, nicknamed 'the Wizard of Schenectady', produced a great deal of the intellectual property that built General Electric, and facilitated US economic development. An immigrant, nearly turned away at the border, he fought ill-health his whole life.

Physicist Michio Kaku gives a summary of the role of H1B route of immigration on US science & tech. This is a kind of movement of skills is being widely challenged by anti-immigration sentiment, eg Brexit. A huge surge in the US resulted from Europeans leaving areas of Nazi control, or after WW2, like many in the space programme. Hong Kong & Russia are places with recent brain-drains. We should support study-visas, studentships, and skilled-worker immigration.

Relatively few people make huge contributions in science and technology, and they are often quite unusual people. Our school systems prioritise fitting-in, over thinking unusually. Reformulating our educational systems around supporting neurodiversity better, could do far more than altering taxes. Discussed in more detail here: Do IQ tests measure intelligence?

First, lets take it for granted that the major innovation in the last few centuries has been in science and pre-eminently, the physical sciences.

Then note that Richard Feynman, one of pre-eminent physicists of his generation and the 20th C said in the first book of his Lectures on Physics, that if all scientific knowledge was to be lost for a thousand years and only a single sentence was to survive, what sentence should that be to convey the most information as possible? He said that sentence should be, "that all things are made of atoms".

Now, incredibly, this did happen and philosophy of atomism was lost not for one thousand years but two thousand. I don't think Feynman knew this when he wrote his lectures but I'm sure he would have been delighted.

I'm talking about the atomism of Democritus and Leucippus. But were they concerned with "making life easier" or "having more things". No, they were not. This is the Epicurean philosophy or to use a more contemporary idiom, the Utilitarianism of Bentham. They were metaphysicians in pursuit of understanding the physical world before them. And in this, contra your assertion that morality has no part to play, they were driven by a passion for truth. One of the moral virtues par excellance.

Allow me to point out that your depiction of communism is in actuality a straw-man promoted by pro-capitalist pundits. Communism doesn't demand strict equality or equal wealth; communism demands that people receive wealth proportionate to the amount of labor they expend producing goods. They look at a situation like Amazon — where thousands of people sweat away in warehouses sorting, packing, and shipping goods, while Jeff Bezos uses the company's earnings to buy a super yacht and build giant penis-shaped rockets — and think: "Yeeaaah, that's not really fair, is it?". Just so it's said...

The idea of banning inheritance has arisen in US political history, usually framed as a 100% inheritance tax on estates over a certain value. It never gained much traction, largely (I think) because the people who would have to pass such a law are themselves quite wealthy. But I'm not certain the idea as you've framed it would be useful or helpful. for the following reasons:

Banning inheritance would likely do nothing to eliminate class or wealth differences. It wouldn't even do much to solve the problem of ne'er-do-well offspring; I imagine W. Bush would still have been elected president despite his horrendous track record as a businessman. All it would really do is flush out government coffers — because where else is uninheritable wealth going to go — which might have some advantages.

Not the answer you're looking for? Browse other questions tagged marxism capitalism communism or ask your own question.

3
Do IQ tests measure intelligence?
4
Philosophers on alternatives to capitalism and communism